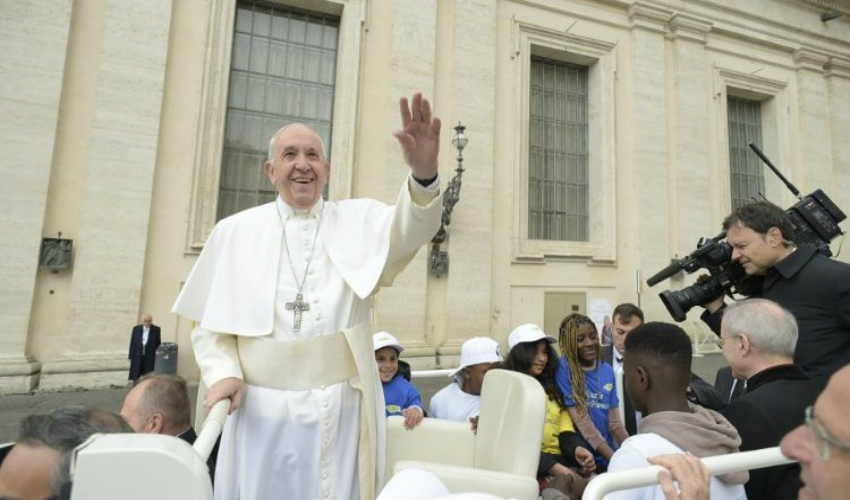 Pope Francis focuses his catechesis at the Wednesday General Audience on the final petition of the Lord’s prayer, saying Jesus is at our side to deliver us from all manner of evil.

“Christian prayer does not close its eyes on life,” said Pope Francis. “It is a filial prayer, not an infantile one.”

The Holy Father made those remarks in the catechesis portion of his weekly General Audience.

Reflecting on the final petition of the Lord’s prayer, he said Jesus invites us to ask God to “deliver us from evil” because “life is fraught with difficulty.”

“If these last lines of the Our Father were excluded, how could sinners, the persecuted, and desperate and dying souls pray?” he asked.

Pope Francis then reflected at length on the presence of evil in the world.

He said the word used in the original Greek (πονηρός) evokes “the presence of evil that seeks to grab hold and bite at us, and from which we ask God for delivery.”

“History books are a bleak catalogue of how our existence in this world has often been a failed adventure.”

There is a mysterious evil, he said, “which is surely not the work of God, but which silently penetrates the folds of history.”

But, the Pope noted, the person who prays is not blind and sees clearly that evil is in contradiction with the mystery of God.

“The last cry of the Our Father is hurled against this evil,” he said, “which encompasses the most diverse experiences, including mourning, the suffering of innocents, slavery, the exploitation of others, and the cries of innocent children.”

Covering the full range of evil, the Lord’s prayer is like “a symphony that seeks to be fulfilled in each of us.”

Pope Francis said Jesus’ experience of death on the cross fulfilled the prayer he taught his disciples: “Father forgive them for they know not what they do.” No matter how much we are subjected to wickedness, Jesus will be at our side to save us.

“Jesus’ prayer leaves us the most precious inheritance: the presence of the Son of God who delivers us from evil,” he said.

“From Jesus’ forgiveness on the cross flows peace. True peace comes from the cross; it is the gift of the Risen One.”