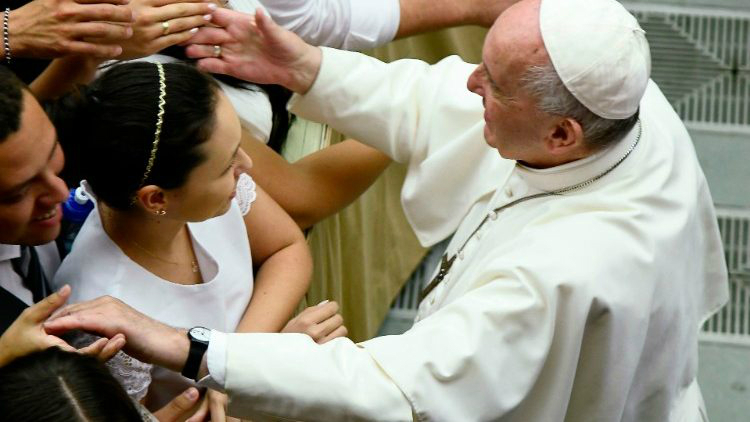 Pope Francis during his weekly General Audience (AFP or licensors)

During his General Audience on Wednesday, Pope Francis reflects on how the Christian community is born of the outpouring of the Holy Spirit and grows through the mutual sharing of life among the Lord’s disciples.

In his continuing catechesis on the Acts of the Apostles in the Paul VI hall on Wednesday, Pope Francis spoke of the solidarity between Christians and how it is essential in building up God’s family. This fraternity he said, “is nourished by receiving the sacrament of Christ’s Body and Blood.”

The Pope underlined that there is a “dynamism of solidarity that builds the Church as the family of God, where the experience of koinonia is central.”

If you want to know that you are good Christians, said Pope Francis, “yes, you must pray, try to approach communion, reconciliation” … but that signal that your heart has converted, is when one is generous with others and who helps the weakest.

The Pope stressed that when it comes to a true conversion, actions speak louder than words.

Reflecting on the history of the Church, the Pope said that there have always been Christians who stripped themselves of material things; things that were not necessary in order to give to those in need.

How many Christians here in Italy volunteer, he noted. “This is beautiful”, he said, sharing time with others; helping those in need.

In Biblical terms, the Pope highlighted that a concrete example of sharing and communion of goods can be found in the witness of Barnabas. “He owns a field and sells it to deliver the proceeds to the Apostles. But alongside his positive example there is another sadly negative one: Ananias and his wife Sapphira, who sold a piece of land, decided to hand over only part of it to the Apostles and to keep the other for themselves.”

The enemy of hypocrisy

The Pope emphasized that “those who behave in this way pass through the Church like tourists”.

He concluded by saying that, “a life based only on making a profit and taking advantage of situations to the detriment of others inevitably causes inner death. How many people say they are close to the Church, friends of priests, bishops while only seeking their own interests? These are the hypocrisies that destroy the Church.”