Celebrating a unique Easter with Pope Francis during Covid-19

Celebrating a unique Easter with Pope Francis during Covid-19 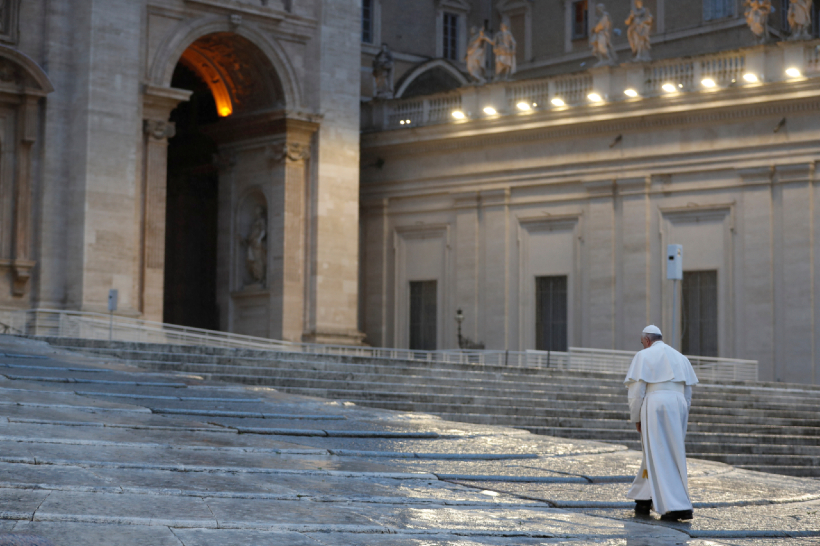 The Coronavirus pandemic challenges the Vatican Office for Liturgical Celebrations to find new ways to accompany the faithful during this year’s Easter liturgies.

Holy Thursday, Good Friday, the Easter Vigil, and Easter Sunday Mass: the Vatican Office for the Liturgical Celebrations of the Pope has had to quickly reorganize the way these liturgies are celebrated this year during the Coronavirus lockdown.

While Pope Francis will preside over them without the physical presence of the faithful, millions will join him spiritually through the media. Radio, television and the internet will allow the Pope to be close to those unable to participate in the liturgies of this unique Easter Triduum. The Crucifix of St. Marcellus and the Salus populi Romani icon will be present during all the liturgies. Both were already visible during the Pope’s prayer in St. Peter’s Square on 27 March, and Palm Sunday Mass on 5 April.

On Holy Thursday, the Pope will not preside at the Chrism Mass, which will be celebrated at a later date. The Mass in Coena Domini (of the Lord’s Supper), which commemorates the institution of the Eucharist, will be held at 6:00 p.m. (Rome time) at the Altar of the Chair in St. Peter’s Basilica. It will not include the traditional washing of the feet which can, in any case, be omitted. There will be no procession of the Blessed Sacrament to the Altar of Repose either.

On Good Friday, the Liturgy of the Passion with the Adoration of the Cross will take place at 6:00 p.m. in St. Peter’s Basilica. The Crucifix of St. Marcellus will be covered. The Preacher of the Papal Household, Father Raniero Cantalamessa, will deliver a meditation, after which the Crucifix will be revealed. Adoration will follow, without the traditional kissing of the Cross.

The Stations of the Cross, or Via Crucis, will take place at 9:00 p.m. on Good Friday evening in St. Peter’s Square. The Stations will include stops around Bernini’s colonnade and the obelisk at the center of the Square, concluding at the steps leading up to St. Peter’s Basilica. The Cross will be carried by two groups: prisoners from Padua, who wrote some of the meditations, and doctors and nurses from the Vatican Healthcare Department. Doctors and nurses continue to be on the front line in the service of those affected by the pandemic.

The Holy Saturday Vigil will begin at 9:00 p.m. in St. Peter’s Basilica. No baptisms will be performed during the liturgy. The fire will be lit behind the Altar of the Confession. Instead of lighting candles, the lights of the Basilica will come on and accompany the three “Lumen Christi” invocations during the procession to the Altar of the Chair. The bells of the Basilica will ring at the moment of the “Gloria”, announcing the Resurrection.

The Pope will celebrate Easter Sunday Mass at 11:00 a.m. at the Altar of the Chair in St. Peter’s Basilica. The Gospel will be proclaimed in Greek and Latin. At the end of Mass, Pope Francis will go to the Sacristy to remove his vestments, before returning to the Altar of the Confession. From there, he will deliver his Urbi et orbi message and give his Easter blessing. The entire celebration will take place inside the Basilica.