Pope calls for day of prayer, fasting in solidarity with Lebanon

Pope calls for day of prayer, fasting in solidarity with Lebanon 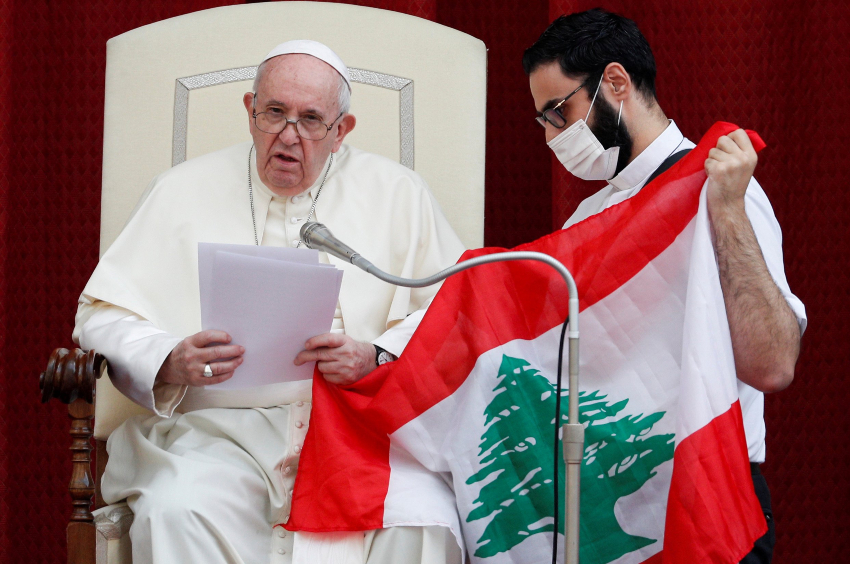 One month after a massive explosion at a fertilizer storage facility tore through Beirut and reopened Lebanon’s old wounds, Pope Francis expresses his and the Church’s solidarity with the troubled nation and calls for a worldwide day of prayer on Friday, 4 September.

Pope Francis on Wednesday called for a day of prayer and fasting on Friday for Lebanon. Besides the deadly explosion of 4 August in Beirut, the nation has been going through the worst economic and political crisis in its history.

“One month after the tragedy that struck the city of Beirut, my thoughts turn once again to Lebanon and its people, so sorely tried,” the Pope said during his weekly General Audience.  He called a Lebanese student priest with a flag of his country to stand next to him.

Reiterating the 1989 appeal of Saint Pope John Paul II he said, “Lebanon cannot be abandoned in its solitude.” Holding the corner of the Lebanese flag as a gesture of his closeness with the Middle East nation, he described Lebanon as a country of hope and expressed admiration for the people’s faith in God and their ability to make their country a “place of tolerance, respect and coexistence unique in that region”.

Lebanon, the Holy Father said, is “a message of freedom and an example of pluralism, both for the East and for the West”. “For the good of the country and the world, we cannot let this legacy be lost,” he said, alluding to the long-drawn crisis in the country.

Even before Covid-19, Lebanon was undergoing the worst economic crisis in its history, which triggered large-scale anti-government protests last year. Today, nearly half the country’s 6 million people are living below the poverty line.  Analysts warn that the scale of the catastrophe may be worse than the 15-year civil war, which raged from 1975 to 1990.

Appeal to political and religious leaders

Pope Francis encouraged “all Lebanese to persevere in hope and to summon the strength and energy needed to start anew.”  He particularly urged “political and religious leaders to commit themselves with sincerity and openness to the work of rebuilding, setting aside all partisan interests and looking to the common good and the future of the nation”.

The Holy Father asked “the international community to support Lebanon and to help it emerge from this grave crisis, without becoming caught up in regional tensions”.

He exhorted the people of Beirut to take courage and find strength in faith and prayer. “Do not abandon your homes and your heritage.  Do not abandon the dreams of those who believed in the dawn of a beautiful and prosperous country. ”

The people of Beirut are in need of assistance and we have spoken with our friends, the Maronite Monks, about how we can help. You can make a tax-deductible donation here and all donations will go to our friends who are on the ground, assisting those in need in Beirut, under the direction of the Maronite Church in Lebanon.

Addressing the country’s pastors, bishops, priests, the consecrated and lay people, he urged them to accompany their suffering faithful with apostolic zeal, poverty,  austerity and humility.  “Be poor together with your poor and suffering people,” he said, insisting, “Be the first to give an example of poverty and humility.”

“Help your faithful and your people to rise up and be protagonists of a new rebirth.”

The Holy Father urged the nation’s Church leaders to work for harmony, the common good, and a true culture of encounter and living together in peace and fraternity, which he said was so dear to St. Francis.

“This,” he pointed out, “will prove a sure basis for the continuity of the Christian presence and your own inestimable contribution to the country, the Arab world and the whole region, in a spirit of fraternity among all the religious traditions present in Lebanon.”

Closeness and solidarity with prayer and fasting

Finally, Pope Francis invited “everyone to join in a universal day of prayer and fasting for Lebanon on Friday next, 4 September”.

On that day, he said, he intends to send Vatican Secretary of State, Cardinal Pietro Parolin, to Lebanon as an expression of his “spiritual closeness and solidarity” with the Lebanese people.    He encouraged all to demonstrate their closeness through concrete works of charity.

The Pope also invited other Christian Churches and religious traditions to join this initiative in a manner they deem most appropriate.

At the end of the appeal, the Holy Father invited all to stand and pray silently for Lebanon.