But are his reasons theologically sound? 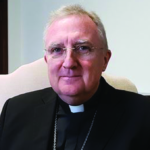 Archbishop Arthur Roche, Prefect of the Congregation for Divine Worship in Rome 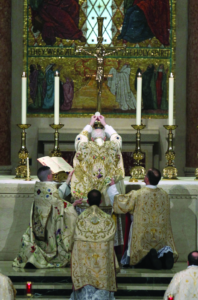 Mass in the old rite 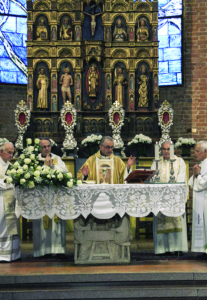 1) Speaking to a Swiss television station, the archbishop expressed the opinion that “What was produced in 1570 was entirely appropriate for the time. What is produced in this age is also entirely appropriate for the time.” That might sound plausible if it was merely saying that most people of this age will pray better using the Missal of Paul VI and that therefore it is appropriate for this to be the “ordinary” liturgical form of the Roman Church. But it has no logical bearing on whether it is reasonable or appropriate to allow another liturgy (from a previous age) to remain as a permanent (if exceptional) option for those who pray better using it.

3) In the same interview, the archbishop stated that the “Ambrosian, Gallican, Dominican or the Anglican (Ordinariate)” liturgies are approved “for specific reasons.” No reason is given for why the Traditional Latin Mass cannot remain in permanent (if exceptional) use for other specific reasons.

The explanation for such feeble and unconvincing arguments is simple. If the Traditional Latin Mass is theologically legitimate, then it is sensible to allow its continued use (on a permanent basis) by faithful Catholics who prefer it. With rare exceptions, there have only been three situations in which Church authorities have attempted to suppress specific liturgical forms: first, if those affected by the change were content to go along with the change; second, if there was some concern about the orthodoxy of the forms being suppressed; and third, if the suppressed forms had been introduced as novelties.

Because of the foregoing, Archbishop Roche has two choices. Either he can use feeble and unconvincing arguments to justify his goal of eliminating the Traditional Latin Mass; or, he can use a claim which would, if true, justify eliminating the Traditional Latin Mass but which suffers from the problem of being heretical—the claim that the Traditional Latin Mass is at odds with Catholic theology. But for Roche to use the latter, patently indefensible claim would constitute admission that his project is grounded in illegitimate motives and aimed at illegitimate ends. Hence his prominent public statements are limited to the feeble and unconvincing.

But a little known quasi-public lecture that Roche presented at the Pontifical University of the Holy Cross in February of 2020 reveals that his prominent use of feeble and unconvincing arguments is duplicitous at best, and mendacious at worst. That lecture was ironically and disingenuously titled “The Roman Missal of Saint Paul VI: A Witness to Unchanging Faith and Uninterrupted Tradition.” In reality, it argued that both the Missal of Paul VI and the Second Vatican Council changed the theology of the Mass and of the Church, thus interrupting Tradition.

According to the archbishop: “The Tridentine Missal considered the priest alone as celebrant” and was based on “a solely clerical vision of the liturgy, in which the clergy alone are active and the faithful passive.” He claims that the Missal of Paul VI is based on a supposedly contradictory belief that the Mass is “the action of the Christus totus [the Church].” And he claims that because of this, the laity should participate externally — by making the responses, etc.

In reality, there was only a change of emphasis. Catholic dogma is quite clear that a priest alone can celebrate a valid Mass without any other member of the Church present—and the Missal of Paul VI explicitly allows for this. At the same time, the prayers of the Tridentine Missal and the traditional understanding of that Mass make clear that those attending it are “active” in that liturgical action as part of “the whole Christ.” Many of the Tridentine texts use the first person plural in addressing the Lord. For example, “Offerimus tibi Domine calicem salutaris”—“We offer you, Lord, the chalice of salvation.” In the Missal of Paul VI, the priest often uses the plural in the same way, speaking alone but on behalf of “the whole Christ.”

Magisterial theology, however, recognizes this distinction. Both Pope Pius XII’s encyclical Mediator Dei and the Sacred Congregation of Rites’s 1958 instruction De Musica Sacra et Sacra Liturgia state that “external” participation by members of the congregation (making the responses, etc.) is better and to be encouraged, but that “non-external” participation (silently reading the prayers in a missal, meditations and mental prayer, saying the rosary, etc.) are also legitimate and constitute true “participation.”

Archbishop Roche further argued that the alleged change in the theology of the Mass was itself influenced by an alleged “replacement” of “the previous notion of the Church as a perfect society…with that of the Church as sacrament and the biblical concept of the People of God..constantly open to reform and conversion.”

In his assertion that the Missal of Paul VI and the Second Vatican Council broke with previous theology, Arthur Roche is actually in agreement with Marcel Lefebvre. The position of both archbishops is that a rupture took place.

Their disagreement concerns only whether that rupture was good or bad. Roche does not seem to realize that the legitimacy, integrity and credibility of Vatican II and the Missal of Paul (legitimacy, integrity and credibility which I do not doubt) depend on the fact that they did not “replace” earlier theologies of the Church or of the liturgy—or, more correctly, depend on that fact that it is theologically impossible for a General Council and a papal liturgical reform to “replace” those earlier theologies.