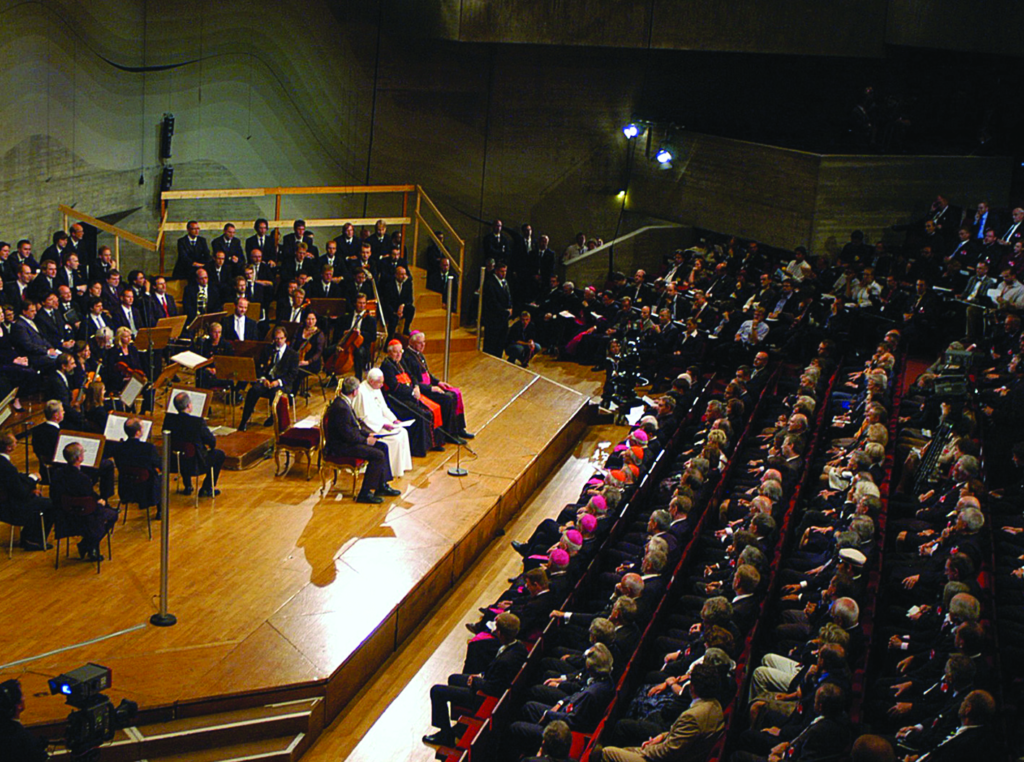 Pope Benedict XVI lectured on faith and reason at the University of Regensburg in Germany Sept. 12, 2006. A quotation from a Byzantine emperor he cited provoked outrage in the Muslim world. The Pope said he was “deeply sorry” (CNS photo/Catholic Press Photo, L’Osservatore Romano)

It is an honor to write in gratitude for the life and the scholarship of Pope Benedict XVI, as he embarks upon his 96th year. His Jesus of Nazareth is, in my opinion, by far the greatest modern meditation upon the person, the life, and the words of the Lord, affirming all that any orthodox Christian in any age has believed of him. It transcends, though it makes use of the discoveries and insights of modern scholarship, all the many attempts in the last two hundred years to give us a Jesus that is tamed, so to speak, and stripped of divinity – a false Jesus, the idol of a passing age.

His The Spirit of the Liturgy likewise far transcends the bitter warfare in the Church between those who, as he himself does, accept tradition with humble gratitude, and those who feel that same tradition as a straitjacket upon their expressions of devotion.

Indeed, the possibility of such transcendence is what the Holy Father desires to return to the consciousness of the modern Catholic, as it reflects the mutual self-communication, the going-out and the returning, of the inner life of the Trinity. Not for Benedict is the modernist embarrassment with the Trinity — which is not an addendum to our faith, but its inmost heart and soul.

If I turn to Eschatology, volume 9 in the Dogmatic Theology he wrote with Johann Auer, I find his usual calm and yet brilliant historical and theological insights on page after page, as when he shows how and why the people of Israel, by the gradual self-revelation of the God who is not like the myth-ridden deities of Israel’s neighbors, come slowly to see that suffering death can be more and other than deprivation; they can be ‘the proper path of someone who belongs to God, and, treading that path in suffering, the servant of God can open to others the door to life as their savior.’

And yet I wish here to point to something that lies at the heart of all that Pope Benedict has written, something rare enough at any time, and nearly banished from the one institution in the west where it should be honored. To show what that is, I recall an anecdote at the beginning of his Regensburg Address. He was a young member of the faculty at the University of Bonn, he says, in the days when “the various chairs had neither assistants nor secretaries, but in recompense there was much direct contact with students and in particular among the professors themselves.” That habit of lively exchange was best embodied in the dies academicus, when the entire faculty would appear together before the students to discuss a question; and thus did the common reason of mankind and of the various disciplines of the university make itself manifest.

It is abundantly clear that Benedict enjoyed those days, and he even permits the wry jest of a skeptic to stand without condemnation, that the University of Bonn had two faculties — of theology — dedicated to the study of something that did not exist. Yet the jest ultimately turns against the skeptic, because Benedict shows, in a careful and generous reading of a dialogue written by the Byzantine emperor Manuel II Paleologus, that the worship we render to God must be deeply rational, logikos, because God Himself is the self-communicating Word, the Logos, through whom all things were made.

Benedict thus wishes to liberate reason from the rationalistic reduction to which it has been subject since Bacon and Descartes, and which has resulted in the almost complete severance of mathematics and the natural sciences from such human sciences as history and literature, let alone theology. His wish is not simply in the service of the Catholic faith as such. It is in the service of man.

For if reason is trammeled up in the empirically measurable, testable, and quantifiable, then man falls from a being made in the image of God, and is reduced to a mere material organism or thing — he becomes himself the inert matter upon which he exercises his tools.

The general result is not worthy to be called a culture.

Because Manuel’s dialogue was between a Christian and a Muslim — between one who believes in the eternal Word, and one who accepts the voluntarist deity of the Koran, for whom to say that God acts according to the logos is to clap fetters on the divine will – the journalists at the time wrote angry reports about how Benedict had insulted the whole Islamic world.

I doubt very much that one journalist in a hundred had the historical, literary, and theological acumen necessary to understand what Benedict was talking about. Benedict, whom I have sometimes described as the last true liberal alive in Europe, was for them a sour old man who does not accept the enlightened morality of our time, which morality is notable for its incoherence, individualistic loneliness, shrill demands for an unspecified ‘change,’ and bloodshed. It never occurred to them to examine the content of what he was saying — to take up the central questions, as to what reason is, what it has to do with God, whether we have a wrong or truncated view of reason, and, if so, whether Western culture is far along its way to death.

To take up those questions, the reporters, and the many professors afterwards who expressed their outrage, would have required more than a broad and deep education in the humanities — and this is the real point of my essay. They would have required the habits and the spirit of the true scholar; the calm, the willingness to entertain questions; the care to distinguish between what someone says and the various motives — which are seldom either completely good or completely evil — for his saying it; a generosity that puts the best construction on what the opponent brings; and the humility to acknowledge one’s own limitations and never to pretend that even a strong likelihood, let alone plausibility or a single instantiation or two, can constitute proof.

In other words, the journalists were not scholars. But then, in our time, neither are the scholars.

But we are in dire need of such. We need scientists humble enough to admit that even the things they subject to analysis are in part but fabrications, parts of a real thing or partial considerations of a thing, manipulated or reduced to fit the tests we want to run.

We need men and women of letters generous enough to be open to the wisdom that comes from people who did not accept our political and moral assumptions, scholars who will find beauty and truth in Milton or Dante because they are there to be found, and who will be grateful when they find it.

In general, we need people like Benedict himself, who welcomes as fellows all those who are genuinely seeking the truth, to form true universities, and not snake-pits of political hatred and strife, or vast bureaucratic entities with the name — but neither the spirit nor the reality — of a university, whose faculties hardly ever speak to one another, because they do not believe, in the end, that there is anything to say. Thus must the Church, once again, return man to himself.