Celebrating the Resurrection Among the Saints

Celebrating the Resurrection Among the Saints

A unique Easter pilgrimage incorporates prayerful preparation before the feast 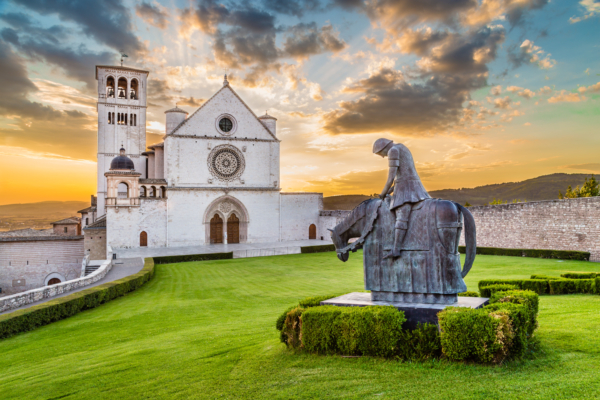 The Upper Basilica of St. Francis in Assisi, Italy

The Catholic Church designates the entire week before Easter as a “Holy Week.” It is a time to prepare our hearts for the remembrance of Christ’s supreme sacrifice for our salvation, and for the great feast that follows — the Feast of the Resurrection of the Lord.

Unfortunately, most Christians, unavoidably caught up in the hustle and bustle of modern life, find it difficult to spend this “holy week” in spiritual preparation: in silence, in contemplation.

The Triduum — those three days and nights in the liturgical life of the Church in which she “re-enacts” the Last Supper, the passion of Jesus, His silent repose in the tomb and then His glorious resurrection — arrives on Thursday evening, during the busy work week. Before we know it, Easter Sunday morning dawns — and we have hardly been able to stop and prepare ourselves for it.

Inside the Vatican Pilgrimages’ Easter in Italy pilgrimage begins almost a week before Easter, in the Umbrian towns of Assisi and then in Norcia, with ample opportunity for silence, prayer and preparation for the coming Triduum.

Assisi, the city of St. Francis, in the Umbrian hills near the very center of Italy, is one of the loveliest, most peaceful cities in the world. The very light and air of the city seem filled with the presence of the spirits of St. Francis and his friend, St. Clare. Pilgrims will spend three nights here, immersed in the readings of the Easter Vigil Mass; the Franciscan friars will hear confessions, and Mass will be offered next to the tomb of St. Francis himself.

On Holy Thursday, we will travel to Norcia, the birthplace of St. Benedict in 480 A.D. Tucked under sparkling white, snow-capped mountains in the center of Italy, it appears much as it has for hundreds of years. Here we will begin the Easter Triduum with the Benedictine monks of Norcia, many of whom are Americans (they have re-launched the historic Benedictine presence in Norcia, and use the ancient Latin liturgy in their daily round of prayer). After a devastating earthquake in October of 2016 which destroyed their centuries-old basilica, the monks simply began again: they moved outside the city and built a new mountainside monastery and chapel. We will spend Holy Thursday, Good Friday and the morning of Holy Saturday in their new chapel overlooking the town.

Norcia honors Good Friday with a very poignant procession of live Stations of the Cross, which takes place after dark. The next morning, during the “silence” of Holy Saturday, Father Cassian, the prior emeritus of the Benedictines in Norcia, will share a spiritual reflection. After, we drive down to Rome for the joyous celebration of Easter at the Vatican. We will attend both the dramatic Easter Vigil Mass and the glorious Easter Sunday Mass on Easter morning, both celebrated by Pope Francis in St. Peter’s Basilica. These liturgies, celebrating the triumph of Christ over sin and death, are among the most splendid and joyous in the Church’s calendar.

The Italians continue to celebrate Easter Monday (it’s a national holiday: la Pasquetta — “Little Easter”) and so shall we continue to celebrate, by traveling about two hours to the tiny town of Manoppello, Italy (population 157!) in the rugged Abruzzo region. There, we will visit the Shrine of the Holy Face, and its mysterious cloth bearing the image of a man’s wounded face, an image some believe is the actual face of Christ, formed at the moment of his Resurrection.

That same day, we’ll travel to Lanciano, to see the famous Eucharistic Miracle that occurred in the 8th century and remains enshrined there for all to see.

During the final two days of our pilgrimage in Rome, Dr. Robert Moynihan, the founder and editor of Inside the Vatican magazine, will introduce pilgrims to a number of friends, from Vatican officials to long-time observers of Vatican affairs. They will recount some little-known anecdotes, and weave for us a fascinating narrative surrounding some of the most important Vatican events of the last few years. 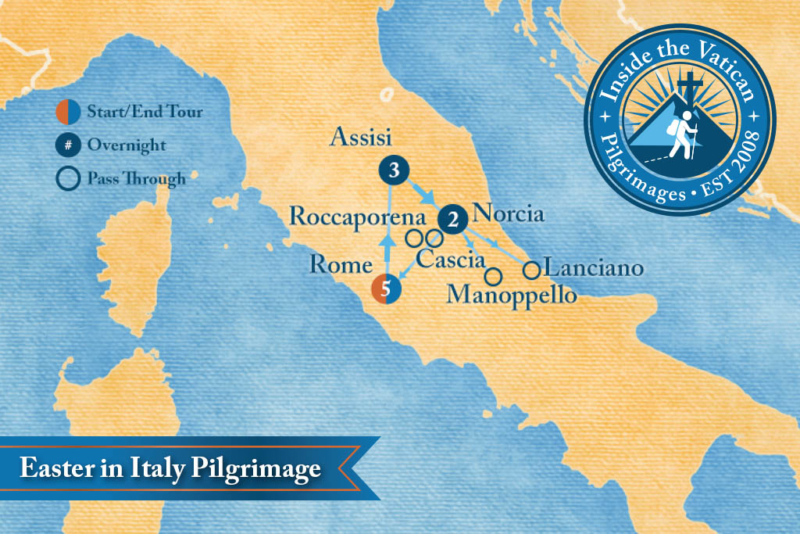 The map of the places visited in our Easter 2023 pilgrimage