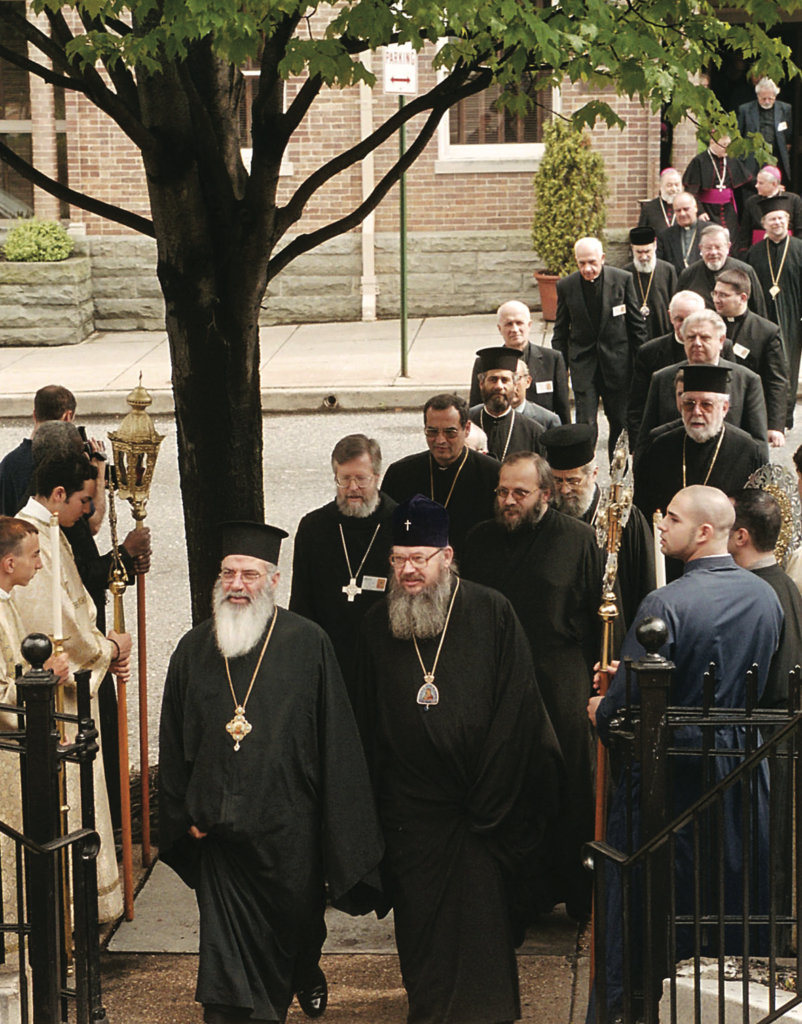 Orthodox leaders and their Catholic counterparts make their way to the Greek Cathedral of the Annunciation in Baltimore for a prayer service, July 2000 (CNS photo by Amy Buck, Catholic Review)

In 1979, Pope John Paul II traveled to Istanbul to celebrate the feast of St. Andrew with Ecumenical Patriarch Dimitrios I. During the visit, the two primates signed a document establishing what would become the Joint International Commission for Theological Dialogue between the Orthodox and Catholic Churches (“Commission”). This theological dialogue was aimed at re-establishing full communion between the Catholic and Orthodox Churches.

At an organizational meeting held in 1980, it was decided that the dialogue should begin with the elements which unite the two Churches. The Commission subsequently adopted documents relating to the Church and the Eucharist (1982), Faith, Sacraments, and the Unity of the Church (1987), and the Sacrament of Orders (1988). With the fall of the Soviet empire and the resurrection of the Byzantine-rite Catholic Churches in Eastern Europe, the Orthodox insisted that “uniatism” become the sole topic of the dialogue.

“Uniatism” was discussed at the meetings of the Commission in 1990, 1993, and 2000. Although a document on the subject was adopted in 1993 at Balamand, Lebanon, the  Orthodox side insisted that further concessions be made by the Catholics at the Commission’s meeting in Maryland in 2000. This meeting was so heated that it adjourned with no future meeting scheduled.

In June 2005, the Ecumenical Patriarchate informed newly elected Pope Benedict XVI that all of the Local Orthodox Churches had agreed to resume the theological dialogue.  Each of the 14 Local Churches would be entitled to two representatives on the Commission. The subject of “uniatism” would be temporarily set aside and instead the dialogue would now focus on synodality and authority within the Church. The discussion of this broad topic would be the first step in considering the subject of the role of the pope — the critical subject that divides Orthodox and Catholics the most.

A meeting was held in Belgrade in September 2006 to discuss a draft document on synodality and authority. There was a paragraph in this document stating that “the fact of primacy at the universal level is accepted by both East and West” although “there are differences of understanding” with respect to its exercise and its spiritual and theological foundations. At the Belgrade meeting, the head of the Orthodox side conferred with the other Orthodox representatives and put this paragraph to a vote. Only the Moscow Patriarchate voted against it.

In October 2007, a plenary meeting was held in Ravenna to finalize this general document. On the first day, the representative of the Moscow Patriarchate walked out of the meeting because of a dispute with the Ecumenical Patriarchate relating to Estonia. Later in the meeting and without the presence of the Moscow Patriarchate, the Orthodox and Catholic sides reached agreement on the entire Ravenna document, including the section on universal primacy.

The next meeting of the Commission was held in Cyprus in 2009 to discuss a new draft document on the role of the Bishop of Rome during the first millennium. The Moscow Patriarchate returned to the dialogue but with the understanding that the Orthodox position in the dialogue with the Catholic side would not be determined by a vote. Rather, the formulation of the Orthodox position would require a complete agreement of all of the participating Local Orthodox Churches.

Because of the requirement of a consensus by all Orthodox participants, the Moscow Patriarchate or any other participating Local Church was now in a position to prevent the Orthodox side from taking a position in the dialogue with which it disagreed. As will be discussed next month, this has greatly affected the subsequent dialogue.