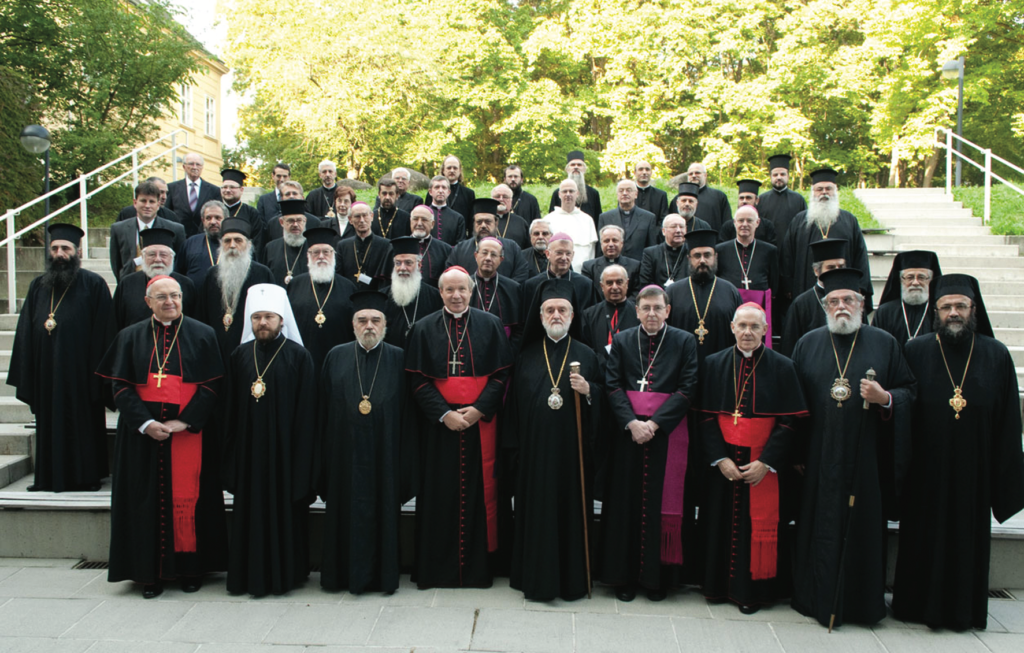 The plenary session of the Joint International Commission for Theological Dialogue between the Orthodox and Catholic Churches (“Commission”), held in Ravenna in October 2007, was very successful and adopted a document on synodality and authority. For the first time in the theological dialogue, Catholics and Orthodox agreed that a protos (primate) is needed at all levels of the Church, including the universal level. However, there was one problem — the Moscow Patriarchate had boycotted the plenary because of a dispute with the Ecumenical Patriarchate.

In October 2008, the Coordinating Committee of the Commission, again without participation of the Moscow Patriarchate, met in Crete and agreed on the text of a new document to be considered by the next plenary in 2009. This “Crete document” focused on the role of the Bishop of Rome in the first millennium. It is the consistent practice of the Commission not to make public a draft, such as the Crete document, until after it is adopted by the plenary. Unfortunately, in this case, an Italian Catholic journalist somehow obtained a copy of the Crete document and posted it on his website. The text caused an uproar among conservative Orthodox who believed that it assigned too important a role to the papacy.

The Commission considered the Crete document at its plenary meeting in Paphos, Cyprus in October 2009. At this point, the Moscow Patriarchate had rejoined the dialogue. Probably due to the uproar from Orthodox conservatives resulting from the leaked Crete document, the warm atmosphere prevailing at Ravenna was replaced by a cold chill. The hotel in Paphos where the plenary was held was even picketed by Orthodox conservatives. Although the Crete document had been approved by the Catholic and Orthodox members of the Coordinating Committee, it was now subject to harsh criticism from the Orthodox side at Paphos, and only half the document was reviewed. Another plenary meeting was scheduled for September 2010 in Vienna to continue discussion of the document.

Although the atmosphere in Vienna was better than Cyprus, there were still serious disagreements on the Crete document. One major problem was that the Orthodox could not agree among themselves with respect to primacy on the universal level. The Ecumenical Patriarchate, which believes that it possesses a form of universal primacy with certain limited powers over the other Local Orthodox Churches, was very open to the concept of universal primacy. On the other hand, the Moscow Patriarchate, which fiercely opposes the concept that the Ecumenical Patriarchate has more powers than it, contended that universal primacy was simply honor and not authority. After the conclusion of the plenary, Metropolitan Hilarion (Moscow Patriarchate) expressed his opinion that the Crete document would never be an official document of the Commission.

In December 2013, the Holy Synod of the Moscow Patriarchate approved a document, prepared by its own theological commission, which held that primacy at the universal level involves only honor. This Synodal decision in effect prevents any flexibility on the universal primacy issue by the Moscow Patriarchate in the theological dialogue with the Catholic Church. The Orthodox members of the Commission had agreed among themselves that the Orthodox position in the dialogue required a complete consensus of all of its participating churches. This consensus requirement in turn gave the Moscow Patriarchate a veto to prevent the Orthodox side in the dialogue from taking any position inconsistent with the 2013 decision of its Synod.

This set the stage for the next plenary of the Commission which was held in Amman, Jordan in 2014 and which will be discussed in Part III.

[Part I in this series can be found here.]