Desecration, censorship, the ravages of time, and even nesting mice have been unable to destroy the Word of God, handed down for millennia by people of faith.

The endurance of Sacred Scripture is the centerpiece of an interfaith exhibit called Verbum Domini, which brought to the Vatican rare biblical texts and artifacts spanning a period from the third century B.C. to the 17th century.

An Egyptian funerary mask dating from around the first century B.C., and ancient Scripture fragments extracted from such masks.

“We seek to tell the amazing story of the preservation and translation of the most loved, most debated and the best-selling book every year and of all time,” said Steve Green, an entrepreneur and the primary benefactor of the Green Collection, a private collection of more than 40,000 biblical antiquities.

Plans are underway to set up a permanent museum for a portion of the collection, ideally in Washington, D.C., he said.

He said the exhibition at the Vatican was inspired by Verbum Domini (“The Word of the Lord”) — Pope Benedict XVI’s reflection on the 2008 Synod of Bishops on the Bible.

The show, which brought together about 100 items from the Green Collection and 50 items from other collections, opened to the public March 1 and ran until April 15 in the Vatican’s Braccio di Carlo Magno — a hall next to St. Peter’s Basilica.

The rare biblical texts from Jewish, Orthodox, Catholic and Protestant traditions have been handpicked to reflect the inter-confessional heritage and cooperation behind efforts to preserve and pass on God’s Word.

The Bible’s endurance, however, has at times come at great cost.

“It’s a remarkable part of the story (in terms of) both the sacrifice of human investment, whether through time and labor or even the cost of life, as well as how the book itself has survived,” said Scott Carroll, a manuscripts scholar, director of the Green Collection and curator of the Verbum Domini exhibit.

Carroll said papyrus fragments of some of the earliest known texts of the Gospel from the second and third centuries A.D. have been found at digs at an ancient garbage dump in Oxyrhynchus, Egypt.

Even more surprising has been the discovery of early Old Testament Greek texts inside Egyptian funerary masks, he said. Layers of papyrus and plaster had been used to make the papier-maché-like painted masks.

The most precious find, according to Carroll, is the Codex Climaci Rescriptus — one of the earliest, near-complete Bibles in the world. 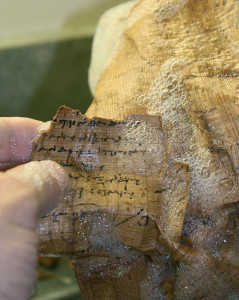 A fragment of Scripture is extracted from an Egyptian mummy mask in this handout photo from the Green Collection (CNS photo).

On display is one of the codex’s manuscripts, which was recycled six times between the fourth and ninth centuries by scribes who wrote a new codex over text from the preceding centuries.

What has excited scholars most, Carroll said, is that the Green Collection, together with Oxford University, has devised a way to read and study the original Palestinian Aramaic — the dialect of Jesus — under the successive layers of Greek and Syriac lettering.

The Bible has had not only the forces of time and nature to contend with, but also human error and ferocity, he said.

One exhibition shows a Torah whose singed edges speak of its escape from the pyres of Spanish Inquisitors; others show how Nazis desecrated sacred texts by cutting them up and turning them into shoe liners, a soldier’s satchel and table coverings.

Even the Church herself had spurred a collection and preservation frenzy, he said, when in medieval times it banned the publication and spread of an English translation of the Latin Bible; censored works often become black market best-sellers.

But as the translation of Sacred Scripture into the vernacular became more widely accepted and standardized, the Bible was crucial to the spread of literacy and learning throughout the world, as people sought to deepen their faith.

One illustration of this can be seen in a 13th-century Gospel book — one of the earliest-surviving Ethiopian manuscripts, whose lower page margins were gnawed through by mice. It had been commissioned by a woman for her daughter, Carroll said, and reflects the extent of female literacy and the importance that families placed on reading Scripture.

The common thread running through the eight-gallery exhibit is how Jews, Orthodox, Catholics and Protestants found ways to cooperate and collaborate in the preservation, translation and dissemination of Scripture.

“I think the untold story in how we got the Bible is the interfaith connection,” Carroll said.

People often think sacred texts are used more often as a weapon to hurt or divide, he said.

However, as experts study the different communities’ texts and artifacts, “you’ll see that Jews, Orthodox, Catholics and Protestants really work together and benefit from each others’ devotion to the same book,” he said.

Jesuit Father Stephen Pisano, dean of the Pontifical Biblical Institute’s biblical faculty, said the ways in which a text is interpreted can be divisive “because when you interpret, you give a particular meaning to something and that meaning may not be necessarily shared by everyone.”

However, the different faith communities do have common ground in the biblical text, he said, and an exhibit like Verbum Domini is a reminder of that joint heritage.

The February 29 inauguration was attended by Vatican officials, representatives of Rome’s Jewish and Orthodox communities, and numerous members of the Green family, who are evangelical Christians.

Lamar Vest, president of the American Bible Society, said the exhibit doesn’t just celebrate history, “we are also making history by making a statement to the world that those of us who do follow Christ are brought together by a single holy Scripture.”

The exhibit “is not just a celebration of the past, it’s a living book” that speaks to every generation and culture, he said.

So many men and women risked so much and worked so hard to faithfully pass on God’s Word throughout history and around the world, he said.

He said, “Now it’s our responsibility to put (Scripture) into practice in our own lives” and communicate the Bible’s message in new ways. 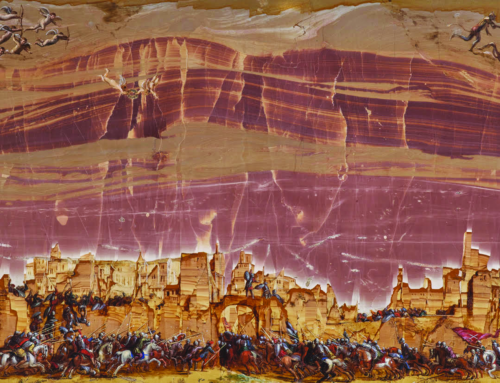