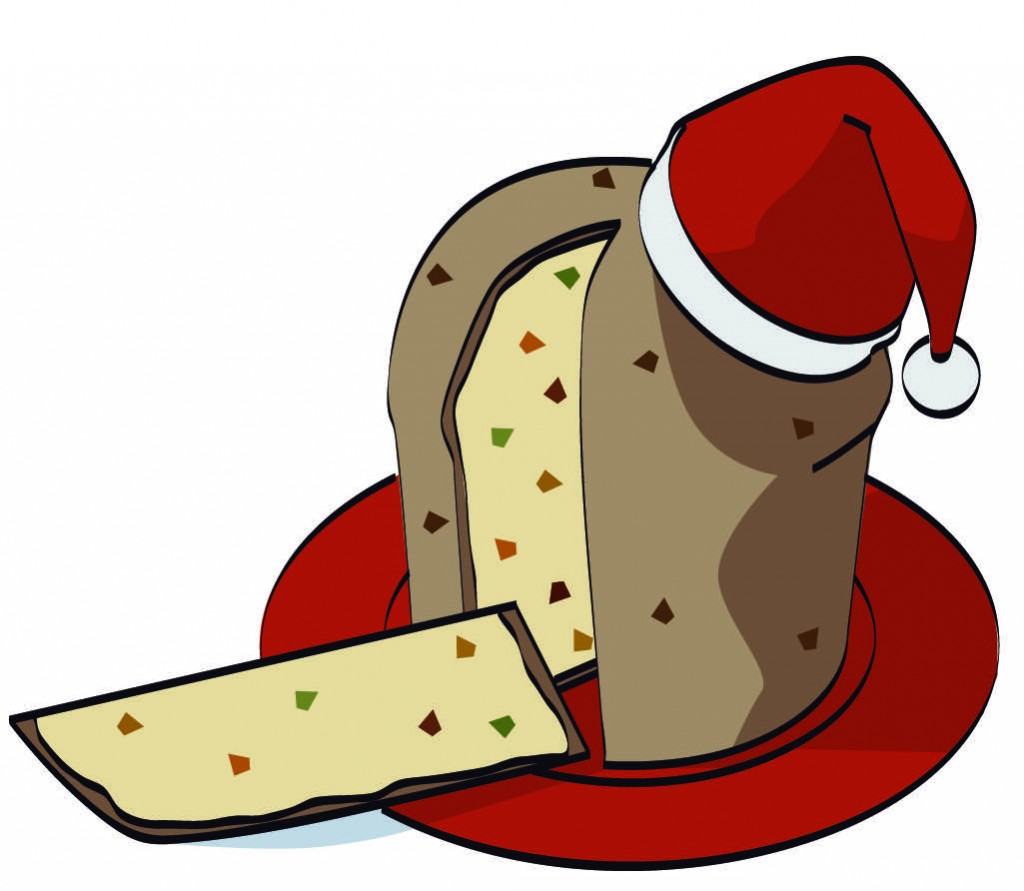 Panettone translates as “a large loaf of bread.” Actually, it’s a large sweet bready cake with various creamy fillings, raisins and candied fruits; its dome is covered with toppings of different flavors. Panettone’s origins probably date back to the Roman Empire: ancient Romans sweetened a type of leavened cake with honey. During the Renaissance, it became a Milanese Christmas specialty, and the legends of its origins are set there.

The most popular legend concerns a nobleman named Ughetto who fell in love with the beautiful daughter of a baker named Toni. The girl’s name was Adalgisa. Ughetto’s family opposed his love for the humble baker’s daughter and blocked their marriage.

It happened that Adalgisa’s father’s bakery boy fell ill suddenly, so poor Adalgisa had to work even longer hours. Soon, it became nearly impossible for the two lovebirds to find time to meet. Deeply frustrated, Ughetto decided to work incognito as the bakery boy’s substitute. Unfortunately, the bakery had hit hard times; another bakery had opened nearby and was luring away customers. As a result, Adalgisa and her father sold less and less bread and were making little money.

Ughetto decided to modify the bread’s recipe by adding more butter and sugar. However, there was no money to buy the new ingredients, so he sold some of his hawks (he was Duke Ludovico Maria Sforza’s hawk breeder). The money he received was enough to buy the necessary butter and sugar. His recipe was successful, and soon the business started gaining customers.

Happy that Adalgisa was in better spirits, Ughetto added candied citron and eggs to his recipe. During the upcoming Christmas season, he added raisins to make the recipe even more festive. He hadn’t only invented a delicious bread which everyone in town praised, but, as a result, he and Adalgisa were soon able to marry and live happily ever after.

A similar story recounts that the invention of panettone wasn’t the brainchild of Ughetto, but of Sister Ughetta. She lived in a poor convent with other young nuns: their upcoming Christmas promised to be miserable. But all of a sudden the situation changed: Sister Ughetta came up with a new cake. She had traced a cross on its dough with a knife. When the cupola-shaped crust was cooked and golden, the cross opened up, creating those bumps still visible today in traditional artisanal panettoni.

The third legend also goes back to the reigns of the Visconti and Sforza families, when Milan was at its peak of prosperity during the 15th century. The story takes place at a large banquet held for the Duke on Christmas night. The chef had prepared a wonderful dessert, but it had burned. A scullery boy named Toni came to the desperate chef’s rescue. Toni explained that he’d made his Christmas cake for his family and friends using the chef’s leftovers. He offered his cake to the chef for the Duke’s banquet. The chef had no choice but to accept Toni’s generous offer. The dessert proved a huge success, and, when the Duke congratulated the chef, the chef gave credit where credit was due. Hence the bread was named after the scullery boy Toni.

Throughout the ages this “tall leavened fruitcake” has made cameo appearances in the arts. It’s depicted in a 16th-century painting by Peter Bruegel the Elder and is mentioned in a contemporary recipe book written by Bartolomeo Scappi (c. 1500-70), personal chef to six popes. The first recorded association of panettone with Christmas can be found in the writings of 18th-century philosopher Pietro Verri. He refers to it as “Pane di Tono” (“luxury cake”).

During the 19th century, panettone’s popularity gradually spread through Northern Italy and then abroad to North and South America thanks to the immigrants. For example, Lombards who went to Argentina and Brazil brought their love of panettone with them, and so panettone is enjoyed at Christmastime with hot cocoa or liquor, now a mainstream tradition in those countries.

In the early 20th century, two enterprising Milanese bakers began to produce panetttone all over Italy. One was Angelo Motta, who in 1919 revolutionized traditional panettone. He gave it its tall domed shape and now-familiar light texture by making the dough rise three times for almost 20 hours before baking. Motta’s recipe was adapted around 1925 by another baker, Gioacchino Alemagna, who also gave his name to a popular brand that still exists today. The stiff competition between the two bakers led to panettone’s industrial production. Nestlé took over the two brands in the late 1990s, but Bauli, an Italian bakery company headquartered in Verona, has since acquired Motta and Alemagna from Nestlé.

After the Second World War, panettone became affordable to everyone and, again thanks to immigrants to Germany, Switzerland, and Belgium, gained popularity in Northern Europe. Today Italian bakers produce some 117 million panettoni every Christmas. In Rome, for the widest selection, go to Eataly, the megastore for Italy’s top-quality gourmet delights.