Thanks to Francis’ firm decision to continue the work Benedict XVI began before him, Mary Collins, an Irish woman who was abused by a priest when she was just 13 years old, has been nominated a member of the Holy See’s new anti-pedophilia commission. A woman who was abused in the Church as a child is being involved at the highest level of decision-making to ensure that existing rules and regulations are translated into a real change in mentality among the Church hierarchies.

Mary stated: “I was hoping there would be a survivor or a representative of a survivor group on the commission, but had no idea I would be appointed. It came as a complete surprise. I feel the setting up of this commission is a very positive move by Pope Francis. It has the potential to bring real change to how the issue of child protection and the pastoral care of survivors is handled in the future.”

Msgr. Brian Ferme (Portsmouth, England) will become prelate secretary of the Council for the Economy, the Vatican announced in March.

His task will be to assist the Council’s cardinal coordinator (Cardinal George Pell of Sydney, Australia) “in the fulfilment of the functions of the Council for the Economy, whose competences are associated with the guidance and supervision of the administrative and financial activities of the economic entities of the Holy See,” the Vatican said. The appointment follows the Holy Father’s motu proprio, Fidelis dispensator et prudens (February 24, 2014), which established the Secretariat for the Economy. The new body will be presided over by Cardinal Pell. German Cardinal Reinhard Marx will be its cardinal coordinator.

Msgr. Ferme already collaborates with various dicasteries of the Roman Curia; in particular, he is a consultor for the Congregation for the Doctrine of the Faith and the Pontifical Council for Legislative Texts.

The Spanish-born priest, 53, was elected at the Salesians’ General Chapter in Rome on the first ballot.

In 2009 he was named inspector of southern Argentina, an office he has maintained until now. In that role he had reason to come to know and work personally with the then-archbishop of Buenos Aires, Cardinal Jorge Mario Bergoglio, today Pope Francis. He has degrees in pastoral theology and licenses in philosophy and pedagogy.

Pope Francis has named Monsignor Alfred Xuereb as the prelate secretary-general of the Economy Secretariat, whose prefect is Australian Cardinal George Pell. Xuereb has been one of two private secretaries of Pope Francis, and he served as the deputy private secretary to Pope Benedict XVI until he retired. The Secretariat for the Economy was established by the motu proprio, Fidelis et dispensator prudens, published on February 24, 2014.

Pope Francis has a new personal secretary. His name is Yoannis Lahzi Gaid. He is an Egyptian priest of the Coptic rite and a member of the Vatican diplomatic service. He is the author, in the past, of statements very critical in regard to Islam. Gaid is taking the place of Maltese Monsignor Alfred Xuereb, whom the pontiff inherited a year ago from Benedict XVI and has now destined for the position of prelate secretary of the newly-created Secretariat for the Economy. He is joining the Pope’s other personal secretary, the Argentine Fabián Pedacchio Leániz, who is also remaining in his role as an official of the Congregation for Bishops.

The selection of Gaid, as of personal secretaries in general, is not a formal appointment and so was not made public in an official manner. The news was broken by the website Vatican Insider in mid-April.

Born in 1975, Gaid attended the Pontifical Ecclesiastical Academy in Rome (the school for Vatican diplomats) and in 2007 entered the diplomatic service of the Holy See. Initially assigned to the nunciature of Brazzaville in Congo, he remained there for three years. In March of 2010 he was transferred to the nunciature of Iraq and Jordan. But his stay there was very brief. In July of 2011, in fact, he was scheduled to be transferred to the pontifical nunciature of New Delhi, India, but before the transfer to India could take place he was kept back in the first section of the Secretariat of State, in an office of slight importance, that of honorary awards, usually reserved for non-diplomatic personnel.

But Francis has been able to appreciate him both as his neighbor at the residence of Santa Marta and as an interpreter during meetings with Arabic speakers. Gaid is also the prelate who gives the greetings in the language of the Koran during the Wednesday general audiences.

The admirers of the Pope’s new secretary have included his fellow Egyptian Magdi Cristiano Allam, a Muslim journalist and writer who converted to Christianity and was baptized in St. Peter’s by Benedict XVI on March 22, 2008, who for some time has been quite critical of a Church that in his view is too yielding toward Islam.

In his book Grazie Gesù. La mia conversione dall’Islam al cattolicesimo (“Thank You, Jesus: My Conversion from Islam to Catholicism”) published by Mondadori in Italy in the year of his baptism, Allam wrote in regard to Gaid: “Special mention must be made of Fr. Yoannis Lahzi Gaid, for years associate pastor of the Church of Santa Domitilla in Latina and currently the secretary of the apostolic nunciature in Congo-Brazzaville.

“I met him in Rome after he had expressed his friendship and solidarity for me for years.”

“With his deep understanding of the reality of Islam as it actually exists in the minds and hearts of the majority of Muslims, and not as it is dressed up by certain mystifiers and dissimulators who mock at the ignorance, naiveté, sentimentalism, and ideological collusion of the West, Fr. Yoannis fully shares my positions on Islam and was close to me as a brother and a Christian in the moments when the media firestorm deliberately orchestrated following my conversion in order to discredit and defame me had reached its height.”

In this regard, Allam cited an interview on March 31, 2008 in which Gaid stated: “I have always tried to be the friend who respects the different religion of the other without being afraid of speaking the truth or of emphasizing that Christianity is a call to freedom. And when Magdi asked me about the Copts in Egypt, I did not conceal the immense difficulties experienced by Christians in places where the majority is Muslim—a difficulty that does not come from a few fundamentalists, but from a culture of death and violence based on very clear phrases that cite and call to violence and jihad.”

In 2010, moreover, after the New Year’s massacre in the Church of the Saints of Alex­andria in Egypt, Gaid replied publicly to statements of the grand imam of the mosque of Al-Azhar, who had condemned as interference in Egypt’s domestic affairs the words of Benedict XVI at the Angelus of Sunday, January 2.

His statement marked the breaking off, on the Egyptian side, of a dialogue between Al-Azhar and the Vatican, laboriously restored only recently.

Cardinal Marco Ce
Cardinal Marco Ce died at age 88 on May 12 in a hospital in Venice. He had been recovering from a fractured femur after a fall a month earlier. In a telegram of condolence to Archbishop Francesco Mor­aglia of Venice, Pope Francis described the late cardinal as a “meek and wise pastor” who offered his “generous service to the word of God” as well as his “fervid dedication to the carrying out of an authentic liturgical spirit.”

A noted theologian and biblical scholar, Ce was asked by Pope Benedict XVI to lead the weeklong Lenten retreat in 2006. Afterward, Benedict praised the cardinal’s meditations on the Gospel of Mark, saying: “You have given us again the certainty that in our boat — despite all of the storms of history — Christ is here.” —From CNS

America Names a new Vatican Correspondent, Opens Rome Bureau
Fr. Matt Malone, S.J., editor-in-chief of America, announced on May 21 the appointment of Gerard O’Connell as full-time associate editor and Vatican correspondent. Mr. O’Connell will serve as the Rome bureau chief for America, the first appointment of its kind in the 105-year history of America magazine. America is a national Catholic weekly magazine published by the Jesuits of the United States.

“We are delighted to welcome Gerard O’Connell to America as our full-time Vatican correspondent,” Father Malone said. “He will provide comprehensive coverage of this extraordinary moment in the life of the papacy and in the life of the Society of Jesus.

“Mr. O’Connell is a senior member of the Vatican press corps and has an extensive network of contacts throughout the world that will position America as a ‘go-to’ resource for analysis and reporting from the heart of the Church.”

O’Connell is an Irish-born journalist and graduate of Cambridge University (England) and has been resident in Rome for the past three decades.

O’Connell began his career in journalism in 1985 when he was asked to report on the Extraordinary Synod of Bishops 20 years after the conclusion of the Second Vatican Council in 1965. Since then, he has reported on all the Synods of Bishops and, from 1990 onwards, on all the major events at the Vatican, including the consistories and the foreign trips of John Paul II, Benedict XVI and Pope Francis. During these years he has written for a variety of news outlets in the English-speaking world, including Inside the Vatican. —ITV Staff 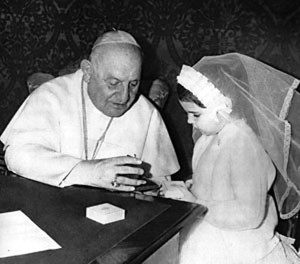 John XXIII and a young girl.

John XXIII’s sense of humor
St. John XXIII, canonized April 27, is remem­bered for his warmth, simplicity, and sense of humor. Pope Francis, in canonizing “the Good Pope,” recalled his predecessor as being holy, patient and a man of courage, especially by calling the Second Vatican Council. “He was a man who let himself be guided by the Lord,” Pope Francis has said. But he was also guided by his cheerful disposition, his simple, peasant background and tongue-in-cheek, wisecracking Italian culture. Here are some of this saint’s funny quips.

Visiting a hospital, he asked a boy what he wanted to be when he grew up. The boy said either a policeman or a Pope. “I would go in for the police if I were you,” the Holy Father said. “Anyone can become a Pope—look at me!”

Another time he said, “It often happens that I wake up at night and begin to think about the serious problems afflicting the world and I tell myself, I must talk to the Pope about it. Then the next day when I wake up, I remember that I am the Pope.”

And, when a reporter once asked him, “How many people work in the Vatican?” he reportedly said: “About half.” —from CNS