All three archangels (Michael, Gabriel and Raphael) are now venerated in a common feast on September 29, which used to be St. Michael’s feast alone. “MI-CA-EL” means “Who is like to God?” Such was the cry of the great archangel when he smote the rebel Lucifer in the conflict of the heavenly hosts, and from that hour he has been known as “Michael,” the captain of the armies of God, the type of divine fortitude, the champion of every faithful soul in strife with the powers of evil.

Michael was the protector of the Israelites, especially in the days of their captivity in Babylon. “Michael, the great prince,” the Old Testament prophet Daniel calls him, “guardian of your people” (Dan 12:1). In the New Testament Book of Revelation, St. John speaks prophetically of the final victory of Michael and his regiments against the army of the great dragon, Satan. After a mighty struggle, Michael casts the enemy down to earth (Rev 12:7-9). Since Christ’s coming, the Church has ever venerated St. Michael as her special patron and protector. She invokes him by name in her confession of sin, summons him to the side of her children in the agony of death, and chooses him as their escort from the chastening flames of purgatory to the realms of holy light. Lastly, when Antichrist shall have set up his kingdom on earth, it is Michael who will unfurl once more the standard of the Cross, sound the last trumpet, and binding together the false prophet and the beast, hurl them for all eternity into the burning pool. 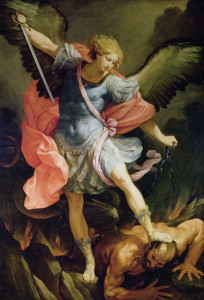 Churches dedicated to St. Michael in the Middle East date from as early as the fourth century. In the West, veneration of Michael became widespread, particularly after his apparition around AD 500 in a cave in Mount Gargano, southeast Italy. The archangel revealed to the local bishop, St. Lawrence of Siponto, that he should erect a shrine there in honor of the archangel himself and all other angels. After St. Lawrence did so, “Mount Santangelo” soon became a noted place of pilgrimage.

St. Michael also figures in the annals of Pope St. Gregory the Great. During the pestilence that struck Rome in the year 590, Gregory organized a great penitential procession through the streets of the Eternal City to beg God to withdraw the plague. Tradition says that when the march passed by the massive tomb of Emperor Hadrian, St. Michael appeared on its summit sheathing his sword, and the epidemic ceased. Today Hadrian’s fortified tomb is called the Castel Sant’Angelo — Castle of the Holy Angel — and for centuries it has been topped by a statue of St. Michael, dressed in the armor of a Roman soldier, returning his sword to the scabbard.

The other major Western shrine of the archangel is the famous Mont St. Michel, a rocky outcropping off the coast of Brittany, France, where the bishop of Avranches established a Benedictine monastery in AD 708, again on the advice of the Archangel Michael. In Cornwall, too, near the city of Penzance, there is a little offshore island resembling Mont St. Michel, which in medieval times was likewise the site of a Benedictine monastery that became an English place of pilgrimage.

Pope Leo XIII had the soldier-angel in mind when, in 1886, he ordered that a prayer to St. Michael and several other prayers be recited by priest and faithful at the end of every Low Mass. On May 18, 1890, twenty years after the Capture of Rome had deprived the Pope of the last vestige of his temporal sovereignty, and the papal residence at the Quirinal Palace had been converted into that of the King of Italy, a much longer prayer to St. Michael was approved for use, and we cite this here:

“O glorious Archangel St. Michael, Prince of the heavenly host, defend us in battle, and in the struggle which is ours against the Principalities and Powers, against the rulers of this world of darkness, against spirits of evil in high places (Eph 6:12). Come to the aid of men, whom God created immortal, made in his own image and likeness, and redeemed at a great price from the tyranny of the devil (Wis 2:23-24, 1 Cor 6:20).

“Fight this day the battle of the Lord, together with the holy angels, as already thou hast fought the leader of the proud angels, Lucifer, and his apostate host, who were powerless to resist thee, nor was there place for them any longer in Heaven. But that cruel, that ancient serpent, who is called the devil or Satan, who seduces the whole world, was cast into the abyss with all his angels (Rev 12:7-9).

“Behold, this primeval enemy and slayer of man has taken courage. Transformed into an angel of light, he wanders about with all the multitude of wicked spirits, invading the earth in order to blot out the name of God and of his Christ, to seize upon, slay and cast into eternal perdition souls destined for the crown of eternal glory. This wicked dragon pours out, as a most impure flood, the venom of his malice on men of depraved mind and corrupt heart, the spirit of lying, of impiety, of blasphemy, and the pestilent breath of impurity, and of every vice and iniquity.

“These most crafty enemies have filled and inebriated with gall and bitterness the Church, the spouse of the Immaculate Lamb, and have laid impious hands on her most sacred possessions (Lam 3:15).

“In the Holy Place itself, where has been set up the See of the most holy Peter and the Chair of Truth for the light of the world, they have raised the throne of their abominable impiety, with the iniquitous design that when the Pastor has been struck, the sheep may be scattered. Arise then, O invincible prince, bring help against the attacks of the lost spirits to the people of God, and bring them the victory. Amen.”