The Espousals Of The Blessed Virgin Mary

The Espousals Of The Blessed Virgin Mary

At the Council of Constance in 1416, John Gerson proposed that a votive Feast of the Betrothal of Mary Most Holy and St. Joseph be observed mainly by priests on the Thursday of Advent’s Ember Week when the Gospel of the espousal would fit nicely. In 1474, Franciscan Bernardine of Bustis wrote an Office for the feast. By 1517, the Annunciation Sisters founded by St. Jane of Valois already celebrated the feast. In 1537, the Franciscans adopted it to be celebrated on March 7, and soon after the Servites for March 8, and the Dominicans for January 22. A 1550 work invites people in Holland to celebrate the recently-instituted feast on January 15. In 1684, Pope Innocent XI permitted its celebration in the empire of Leopold I, and later also in Spain. In both France and Canada it was observed on January 22, while Polish confraternities celebrated it on January 23. In 1725, Pope Benedict XIII extended it to the Papal States, setting the date for January 23.

During the 19th and 20th centuries, various particular permissions have been given to celebrate the feast, usually on January 23, but occasionally on other days. In 1840, for example, it was granted to the United States of America. The extent of usage merited its inclusion in editions of the pre-Vatican II Roman Missal for January 23 in the section for particular places, pro aliquibus locis.

Under Pope Blessed Pius IX, the Dioceses of Lausanne, Geneva, and Perpignan were allowed to celebrate the feast as a double major with the commemoration of St. Joseph. The feast is listed in the 1848 martyrology of the Benedictine Nuns of the Adoration of the Blessed Sacrament. In 1849, the feast was extended to the Kingdom of Saigon, and in 1850 to the Province of Oregon. Various dioceses were granted permission to add the commemoration of St. Joseph to their celebration of the feast. At least since 1859, the feast is listed for February 11 in the Proper Office for the Archdiocese of Fribourg (and for February 13 in the 1894 edition). The feast and commemoration are contained in the calendar of St. Martin’s Monastery in Portugal, and in that of the Diocese of Cordoba, Argentina, both approved in 1878. For Cordoba, the feast is celebrated on November 26, rather than January 23 as in the other instances listed. 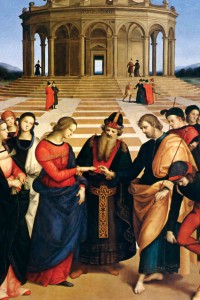 During the pontificate of Pope Leo XIII, similar such permissions continued to be extended. Among the calendars approved with the feast and commemoration of St. Joseph on January 23 were those of the Diocese of Rio de Janeiro, Brazil; the Martyrology of the Diocese of Fréjus-Toulon; the Capuchin Breviary; and the newly-founded Swiss-American Benedictines. The Augustinian Canonesses of the Congregation of Notre Dame at Épinal, France, and the Hungarian Cistercians were granted the same feast, but without explicit mention of the commemoration of St. Joseph. In Spain, the Pious Society of Devotees of St. Joseph in Barcelona, the Diocese of Huesca, and the Cistercian nuns of Segovia all celebrated the feast on November 26, and the first two of these were permitted an extrinsic celebration on the last Sunday after Pentecost.

During the 20th century, the Feast of the Espousals on January 23 continued to be found in more particular calendars: St. Mary Major Basilica in Rome, 1913; Marello’s Oblates of St. Joseph, 1921; the Oratory of St. Joseph in Montreal, Canada, 1940; and Murialdo’s Congregation of St. Joseph, 1946. The Diocese of Zacatecas, Mexico, was granted the November 26 feast in 1958. In Vienna, Austria, the Piarist Church of the Espousals, which includes a Corradini sculpture of Mary and Joseph being blessed by the high priest, was named a minor basilica in 1949.

In 1961 the Sacred Congregation of Rites issued an instruction that removed from particular calendars numerous particular feasts, including the Feast of the Espousals of Mary and St. Joseph, except in places where the feasts have a special connection with the place itself. In the post-Vatican II period of liturgical renewal, the feast is again being permitted for particular liturgical calendars. In 1989, for example, the Oblates of St. Joseph obtained permission to celebrate on January 23 “The Holy Spouses Mary and Joseph” with the liturgical rank of “Feast,” and full proper texts, including a preface:

You give the Church the joy of celebrating the feast of the Holy Spouses, Mary and Joseph: in her, full of grace and worthy Mother of your Son, you signify the beginning of the Church, resplendently beautiful bride of Christ; you chose him, the wise and faithful servant, as husband of the Virgin Mother of God, and made him head of your family, to guard as a father your only Son, conceived by the power of the Holy Spirit, Jesus Christ, our Lord.