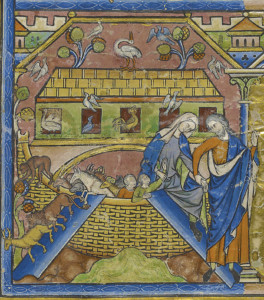 A folio of the bible: a joyous landing for Noah’s Ark.

One of the most extraordinary illuminated manuscripts ever created, the Crusader’s Bible, also known as the Morgan Bible or the Maciejowski Bible, is a medieval picture Bible of 46 folios, renowned for its unrivaled and boldly-colored illustrations and for its fascinating history. Two folios are conserved in the Bibliothèque Nationale de France (MS nov. acq. Lat. 2294); a single folio in the J. Paul Getty Museum in Los Angeles; and 43 since 1917 in New York’s Pierpont Morgan Library. Unbound after many years, about half of these, probably the work of seven unknown artists, are on display in New York until January 4 in a exhibition called “The Crusader’s Bible: A Gothic Masterpiece,” which coincides with the celebration of the 800th anniversary of the French King Louis IX’s birth.

In all likelihood commissioned by this deeply devout Catholic monarch in the 1240s, the folios bring Old Testament stories to life in bright images replete with medieval castles, towns, and battling knights in armor, all intentionally set in thirteenth-century France to make the Bible’s lessons relevant to contemporary “readers” or, more appropriately, “observers.”

“The manuscript,” reports the Morgan’s press release, “does not illustrate the entire Old Testament, but only select portions of Genesis, Exodus, Joshua, Judges, Ruth, and Samuel. Its 46 folios are decorated with approximately 350 episodes, and about 40 percent of the pages contain scenes from the life of David. 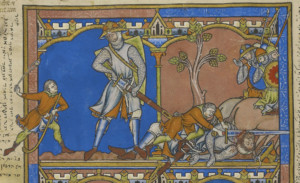 A folio of the Bible: David slays Goliath.

“Also on display,” continues the press release, “a selection of period artifacts and armor, on special loan from the Metropolitan Museum of Art, will offer visitors tangible evidence of the objects depicted so dramatically in the book.” One such object is a large stone catapult projectile excavated at Montfort Castle in the Upper Galilee region in today’s northern Israel near present-day Akko, “a site,” the press release tells us, “that Louis IX and his family likely visited during his stay in nearby Acre from May 1250 to April 1254.”

Others are: a sword, a war hat, a prick spur, a shirt of mail, an aquamanile, and a gemellion or hand basin.

King Louis IX (1214-1270) reigned from 1226 until his death. Much of what we know about his life comes from a biography written by his close friend, confidant, and counselor Jean de Joinville, who, according to Wikipedia, “also participated in the papal inquest into Louis’ life that ended in his canonization in 1297 by Pope Bon­iface VIII.”

The only French king to be declared a saint and often considered the model of the ideal Christian monarch, he took very seriously his mission as “lieutenant of God on earth.” To fulfill his duty, though historians believe it was to get away from his obnoxious mother Blanche of Castile, he conducted two crusades, the 7th (1248) and the 8th (1270). Though unsuccessful, they contributed to his prestige. So did his building of the Sainte-Chapelle (“Holy Chapel”), located within the royal palace complex (now the Paris Hall of Justice), on the Île de la Cité in the center of Paris.

The Sainte Chapelle was erected to house the Crown of Thorns and a fragment of the True Cross, precious relics of the Passion of Jesus. Louis purchased these in 1239-41 from Emperor Baldwin II of the Latin Empire of Constantinople, for the exorbitant sum of 135,000 livres (the chapel cost only 60,000 livres to build).

Louis is honored as co-patron of the Third Order of St. Francis and, according to legend, though it’s unlikely, he joined the Order. This is a possibility because, according to his Wikipedia entry, “even in childhood his compassion for the poor and suffering people had been obvious to all who knew him, and when he became king, over 100 poor people ate in his house on ordinary days. Often the king served these guests himself.”

Louis died on August 25, 1270, probably of dysentery, at Tunis, during the 8th crusade. His entry in Wikipedia tells us: “As Tunis was Muslim territory, his body was subject to the process known as mos Teutonicus (a postmortem funerary custom used in medieval Europe whereby the flesh was boiled from the body, so that the bones of the deceased could be transported hygienically from distant lands back home) for its transportation back to France… Christian tradition states that some of his entrails were buried directly on the spot in Tunisia, where a Tomb of Saint-Louis can still be visited today, whereas his heart and other parts of his entrails were sealed in an urn and placed in the Basilica of Monreale, Palermo, where they still remain… His corpse was taken, after a short stay at the Basilica of Saint Dominic in Bologna, to the French royal necropolis at Saint-Denis, resting in Lyon on the way. His tomb at Saint-Denis was a magnificent brass monument designed in the late 14th century. It was melted down during the French Wars of Religion [1562-98], at which time the body of the king disappeared. Only one finger was rescued and is kept at Saint-Denis.”

Many places worldwide are named for this pious monarch; in the United States, St. Louis, Missouri; St. Louis, Michigan; San Luis, Arizona; and San Luis, Colorado. The most famous churches dedicated to him are the cathedrals in Versailles, St. Louis, Missouri, New Orleans, and the national church of France, San Luigi dei Francesi, in Rome with its three Caravaggio paintings of St. Matthew. 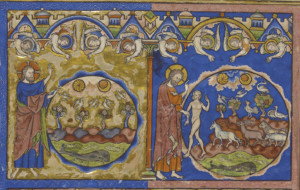 A folio of the Bible: fifth day of Creation.

Less well-known are his portraits: in a bas-relief of historic lawmakers in the U.S. House of Representatives; a frieze of important lawgivers throughout world history in the courtroom of the U.S. Supreme Court; a statue on the roof line of the New York State Appellate Division Court at 27 Madison Avenue in Manhattan; and The Apotheosis of St. Louis in an equestrian statue of the saint by Charles Henry Niehaus in front of the St. Louis Art Museum in Forest Park.

To return to the Crusader’s Bible, King Louis probably used the book as propaganda for his crusading activities. “Whether the manuscript traveled with him to the Holy Land,” the press release tells us, “is unclear, but during the eight centuries since its creation, it has journeyed far and wide.” After Louis’ death, The Crusader’s Bible probably passed to his younger brother, Charles of Anjou (1226-1285), founder in 1266 by conquest of the Angevin dynasty in Naples.

After Charles’s death, in the early 14th century, it seems that a scribe trained in Bologna added captions in Latin for the images. These marginal inscriptions, describing the scenes illustrated, were the earliest ones; others added later in Persian and Judeo-Persian are indicative of changing owners. 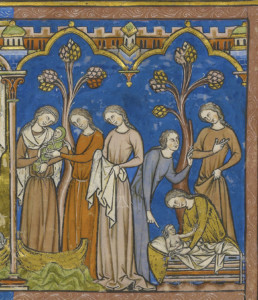 A folio of the Bible: Moses is retrieved from the basket.

In fact, the first documented owner of the Crusader’s Bible was Cardinal Bernhard Maciejowski (1548-1608), bishop of Cracow, elevated to the cardinalate by Pope Clement VIII in 1604. He may have acquired the manuscript in Italy while studying for the priesthood or when he was there as a diplomatic envoy on behalf of Emperor Sigismund III (r. 1587-1632).

The Persian inscriptions, mostly translations of the Latin ones, were added around 1608, when, shortly before his death, the cardinal presented the manuscript as a suitable diplomatic gift to the Persian ruler Shah ’Abbas the Great (1571-1629) in Isfahan to secure his tolerance towards Christians and to seek his help against the victorious Turks.

According to the press release, “the Judeo-Persian inscriptions…were probably added in 1722 or shortly thereafter, as that year Isfahan was sacked by the Afghans. Perhaps at that time the book was looted by an Afghan soldier and possibly exchanged with an Iranian Jew… The manuscript was subsequently owned by John d’Athanasi, a Greek living in Cairo who secured Egyptian antiquities for English collectors. In 1833, he put it up for sale at Sotheby’s auction house. The manuscript was bought by London dealers, who in turn sold it to [the insatiable book collector] Sir Thomas Phillipps (1792-1872).” In 1916, the Morgan’s stylish librarian Belle de Costa Greene, acting on behalf of J.P. Morgan Jr., visited Phillipps’ heir and grandson, promising to buy the manuscript for £10,000, which she did secretly before receiving her boss’ final approval.

Epilogue: The entire Crusader Bible can be seen online by clicking on www.themorgan.org/Crusader-Bible. It is also possible to purchase one of its recently-produced 800 facsimiles from www.faksimile.de in Munich. (Several other reproductions were made earlier, the earliest in 1927 by J.P. Morgan Jr. himself as “Old Testament Miniatures.”) This new German facsimile comes with a commentary volume written by Professor Daniel Weiss, Johns Hopkins University, Baltimore, considered today’s most proficient expert on the manuscript. The commentary provides a transcription of the Latin, Persian and Hebrew texts, which allows the reader to recognize a shift in meaning attributed to certain pictures.