“Verbum Domini” Exhibit on the Bible

“Verbum Domini” Exhibit on the Bible

Natalia Tsarkova celebrates after using a replica of a Gutenberg printing press at the Verbum Domini exhibit. She was assisted by Clifford Keister of the Green Collection.

Who among us does not have maybe four or five copies of the Bible at home? Perhaps there is Grandma’s Bible, a little worn, together with one of those beautiful leather-bound Bibles with gold lettering, and a modern copy which we may have used studying the catechism, and perhaps a more recent, updated and revised “vernacular” translation. But not everyone can boast a collection of biblical texts consisting of more than 50,000 objects of every age and in every language. This is the Green Collection, the richest private collection of biblical texts in the world. This private collection was born from the passion of the family of Steve Green. Green follows the growth of the collection with great interest, and organizes events to raise awareness of this heritage of history, faith and culture. Some 150 pieces from the Green Collection, along with some manuscripts from other private collections, were displayed at the Vatican in the Braccio Carlo Magno in St. this spring.

The Verbum Domini exhibition was an extraordinary experience for the visitor.

Manuscripts, scrolls, books and objects were set in reconstructions of the environments to which they belong, starting from the third century synagogue of Dura Europos, with images which have not yet been fully deciphered.

Visitors then passed through the caves of Qumran where the Dead Sea Scrolls were found. The exhibition provided beautiful reproductions of several scrolls. Then came the Egypt of the Septuagint, and the Oxyrhynchus Papyri, and the Mon­astery of St. Catherine at Sinai, where the first nearly complete Bible was discovered, the Codex Sinaiticus.

Monasteries with their illuminated manuscripts were presented next to a working copy of the Gutenberg printing press. And there was also a room of the castle of Wartburg, where Luther worked in exile on his German translation of the Bible. The exhibition ended with the famous King James translation into English, done in the early 1600s.

Thus, this collection told the story of the Bible, a book which Christians and Jews share. (The exhibition included Renaissance texts in Hebrew.)

The Verbum Domini project was supported by Cardinal Raffaele Farina, archivist and librarian of the Holy Roman Church; by Cardinal Giovanni Lajolo, former president of the Pontifical Commission for Vatican City State and former president of the Governorate of Vatican City State; by Msgr. Nikola Eterovic, secretary general of the Synod of Bishops; and by the Chief Rabbi of Rome, Riccardo Di Segni.

A 1611 first edition of the King James Bible.

This was not an event for collectors but rather a wide-ranging cultural project, Scott Carroll, director of the Green Collection and coordinator of the lecture series accompanying the exhibition, told us.

Students from more than 30 universities have contributed to the research on these objects, under the guidance of experienced teachers. Distinguished professors around the world have the function of supervisors of local research groups. Important conferences are going on, and there will be three academic publications about the Green Scholars Initiative, and a catalog published by Vatican Press.

Among the exhibits was a fascinating section on the Jeselsohn Stele, or “revelation of Gabriel,” a slab of sandstone almost three feet high and weighing about 68 kilograms, discovered near the Dead Sea in Jordan. It contains 87 lines of Hebrew text of the first century before Christ which are believed to foretell the coming of the Messiah.

The long-term goal is to create a national Bible museum in the US on the Mall in Washington, DC. 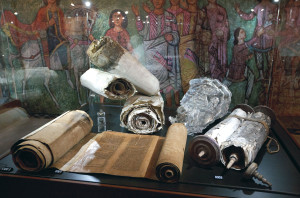 A Torah begun in 13th-century Spain, and Torahs burned during the Holocaust and by Communists
(CNS photos).

The Green family owns the Hobby Lobby chain of craft stores. Specialists estimate the family has bought illuminated, or decorated, manuscripts, Torahs, papyri and other works worth $20 million to $ 40 million from auction houses, dealers, private collectors and institutions. Forbes magazine has estimated the Green family’s fortune at $2.5 billion.

The family has caught everyone’s attention because no one in recent memory has spent so much on Bibles.

Mr. Green is a Pentecostal Christian, but other family members worship in churches of other denominations, including Baptist and Assemblies of God.

For the Green family, the time seems ideal for buying religious works.

“This exhibition,” Scott Carroll said, “is the demonstration of the work of interreligious cooperation of the peoples of the Book, and also illustrates that the Bible has been preserved not only through institutions or beautiful churches, but also by private collectors around the world.”

The Green Collection, presently based in America’s Protestant Bible Belt, is just over two years old. The ever-growing collection currently has some 50,000 items and constitutes the largest and most significant collection of ancient biblical and biblically-related artifacts, scrolls, manuscripts and rare books in private hands in the world.

“The day that Verbum Domini opened in Vatican City, an exhibit by the Vatican Library on secret papal archives also opened in Rome,” Carroll said. “I guess the secret is finally out: Roman Cath­olics, Jews, Protestants and Orthodox Christians can finally come together and share their love for the Word of God and honor those who have preserved it over the ages.”

The idea to bring this collection to Rome, Hobby Lobby President Steve Green said, was related to Rome’s role as a center of religious life.

“As the world comes to Rome for Lent and Easter, and hundreds of thousands visit St. Peter’s Square, there is no better stage on which to share the history of God’s Word with people of all faith traditions,” he said.