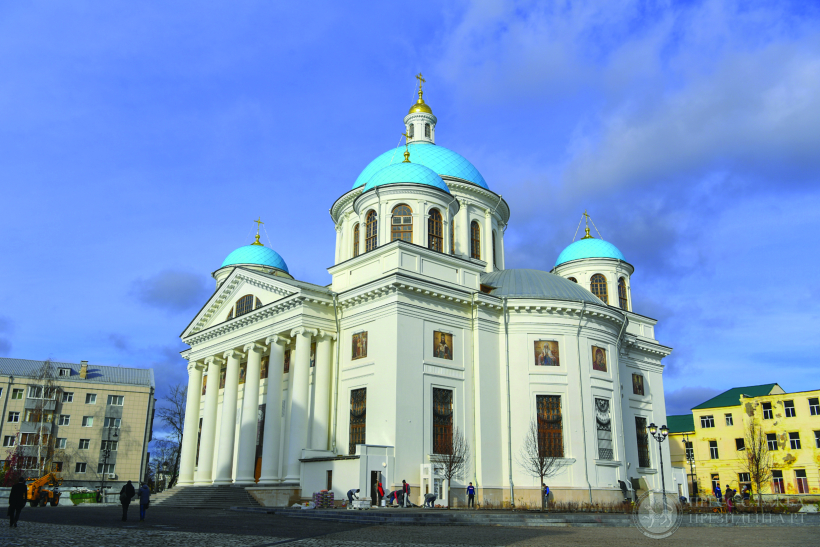 In 1579 in Kazan, Russia, a 10-year-old girl named Matrona had a vision of an icon of the Mother of God which spoke to her and told her to dig in a certain spot to discover this icon. Matrona subsequently did so and found the icon at a depth of approximately one meter. It was wrapped in a red cloth and was completely undamaged by the earth. The icon was taken in a procession to a neighboring church, and two blind men near the procession had their sight restored. Many other miracles were later attributed to the icon, and it became perhaps the most revered icon in Russia. Tsar Ivan IV directed that a monastery and cathedral be established at the site of the discovery.

Elizabeth Federovna, the sister of Tsarina Alexandra, visited the Kazan cathedral. After the assassination of her husband, she had become an Orthodox nun and had become famous for her charitable work. She suggested that a “cave church” be built under the floor of the cathedral so that the cave church would occupy the exact space where the original icon was buried. This was done, and Elizabeth was present for the consecration of the cave church in 1913. Five years later, Elizabeth and her assistant Sister Barbara were taken by the Bolsheviks with certain other members of the Romanov family and thrown down a mine shaft. The bodies of Elizabeth and Barbara were later discovered by the White Army and taken to the Russian Orthodox church in the Garden of Gethsemane in Jerusalem. Both women were later canonized.

In the early 1930s the Communists completely destroyed the cathedral at the Kazan monastery, and a tobacco factory was subsequently built on the location. However, in 2005, there was an important event which marked the beginning of the resurrection of this famous Marian shrine. The Orthodox Church in Kazan was given the beautiful copy of the Kazan icon which had been in the possession of Pope John Paul II for eleven years and to which he had become greatly devoted. The Pope’s icon became the replacement for the original icon destroyed in 1904.

The exterior work on the beautiful cathedral has now been completed. On February 25, 2020, Orthodox Metropolitan Feofan of Kazan consecrated the subterranean cave church. Appropriately, fragments of the relics of St. Elizabeth and St. Barbara were brought from Jerusalem for the consecration and will remain permanently in the cave church for pilgrims to venerate. It is anticipated that the entire cathedral will be consecrated by Patriarch Kirill in 2021. It is hoped that the cathedral with St. John Paul II’s beautiful Kazan icon will be a major pilgrimage destination for both Orthodox and Catholics.