Reflections after the Synod

Reflections after the Synod

Cardinal Péter Erdö: “I think that this has been a very fruitful Synod”

The mission is to proclaim Christ, says Cardinal Peter Erdö of Budapest, Hungary. All the baptized are called on to bear witness to the Gospel, said the president of the Council of European Episcopal Conferences, commenting on the work of the Synod for the New Evangelization. This is what he said to Paolo Ordanza, taking stock of the Synod’s work. 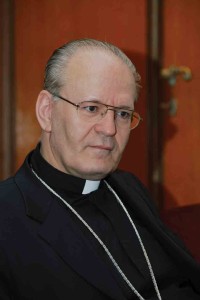 Cardinal Péter Erdö: I think that this has been a very fruitful Synod. Evangelization is not simply the transmission of intellectual content — this would be information —we must all be witnesses. All the faithful, all the baptized have this obligation. Thus evangelization is not an option, a task entrusted to a given category of Christians, but a duty that springs from our being baptized.

What are the frontiers of the New Evangelization in Europe?

Erdö: To begin with, the New Evangelization is not only aimed at continents with a long-established Christian tradition, but it is particularly important in our world, where Christian culture was once prevalent, but where secularization has now prevailed. In Europe there are very big differences between Holland, Turkey, Italy, Russia, and so on. Yet, all these countries have elements in common, among which is a very high degree of secularization.

The evangelical message, as you said, is written and carved on the stones of European cities and painted in the works of art which make these cities so beautiful and attractive for tourists who visit European countries…

Erdö: The artistic heritage to be found in the palaces of our cities still sends out the message of the Gospel. Therefore stones will “begin to shout” unless we announce the Gospel. We are called on to make the message of stones clear.

We must come to know and appreciate our heritage: many people outside the Catholic Church appreciate Christian culture even though they do not live the Christian faith. We are called on to accomplish our mission of evangelization even through art.

Will this Synod start a renewal of evangelization in Europe?

Erdö: I am convinced it will. This is what we are praying for.

Father Julián Carrón: “Make Christianity a reality present in us” 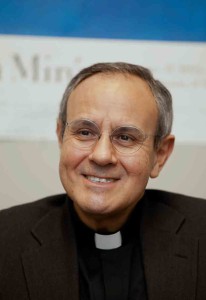 Father Julián Carrón: When I reread the document Porta Fidei (“The Door of Faith”), I was struck by the Pope’s statement that today faith cannot be taken for granted: it is not an obvious premise. Bearing this in mind and rereading the Instrumentum laboris, the document for the preparation of the Synod, I was struck by a passage emphasizing the fact that the Christian message is not proclaimed in the places where men live: in the working environment, the neighborhood, etc. This is a real challenge we have to take up, because today nobody is interested in us. We must cope with the challenge of making Christianity a reality present in us, in the way we face the problems of our daily life, otherwise it will be difficult for men to be interested in what we do when we meet for Sunday Mass.

So the challenge is to be in the places where people live, to get in tune with them and with their need for the absolute. How do you put this into practice?

Carrón: By constantly trying to be present anywhere, in schools, universities and workplaces, where, using our irony, we try to propose and bear witness to the Christian message. We take this to heart; it is our opportunity to prove the truth — in our daily life, our job, our family and our relations with other people — of what we believe in. And first of all we want to achieve this for ourselves; if our faith is true for us, we will be able to prove to others how it can transform their daily lives.

Is personal conversion the starting point?

Carrón: Yes, it is the starting point of any transmission of faith. It is the first step. Once we come to accept Christ, we can experience that this conversion is useful for our life, for that of our brothers and of the whole world.

Today all this has a further motivation, considering the crisis of values — even in politics — which our society is going through. So, what can this commitment imply?

Carrón: It implies a certain way of exercising one’s profession in one’s workplace, a certain way of being present in one’s neighborhood or town. If a new lifestyle prevails, along with the desire to transmit it to your neighbors so that they may benefit from it, emphasizing the positive implications for everyone, then it will be passed on to those involved in politics.

What is your wish for the opening of the Year of Faith?

Carrón: My wish for my friends and for all Christians is expressed in the Pope’s words: that we may be able to rediscover the value of faith, so that at the end of this event we may be more convinced than ever that faith is the most precious gift we happen to have received in our life.

The challenges of being human and of living in a world that does not always want to hear about faith do not lessen the obligation to proclaim the Gospel and to call the baptized to live their faith more fully, said Cardinal Donald W. Wuerl of Washington.

“We already know our difficulties, the tensions, our restlessness, our faults and our human weakness,” Cardinal Wuerl told members of the Synod of Bishops on the new evangelization October 17. 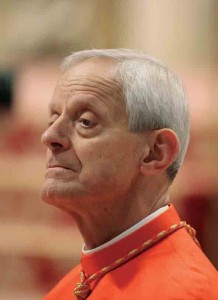 Nevertheless, God calls members of the Church to proclaim salvation in Christ to the ends of the earth and to re-propose the Gospel “to those who are now distant from the Church,” said the cardinal, who was serving as the Synod’s relator.

Summarizing — in Latin — the speeches Pope Benedict XVI and Synod members gave October 7-17, the Washington cardinal formulated a dozen questions for participants to discuss in their small groups before drafting propositions to present to the Pope.

The “two great pillars of evangelization” must be a commitment to know and proclaim the truth of Christ and to do so with love, he said.

In the more than 230 speeches delivered at the synod, Cardinal Wuerl said, members agreed that the duty to proclaim the Gospel “is not just the responsibility of clergy and religious.” Lay people share the obligation as well, so the Church must prepare them, educate them and support them, he said. The cardinal asked members to consider in their small groups concrete ways to increase people’s awareness of their responsibility. “It is the task of the individual Catholic to invite people back to the practice of the faith,” he said.

The family and the parish deserve special recognition and special support, because they are the places where most people first encounter the faith and where they most grow in faith, he said.

Cardinal Wuerl asked members to consider ways the Church could devise a program of catechesis that is “basic, complete and inspiring in the search for truth, goodness and beauty” and suggested the small groups discuss the idea advanced by several Synod members of formally establishing the ministry of catechist in the church.

Attacks on the family and increasing secularization around the globe mean the Church may have to re-evaluate its normal way of proceeding, he said. The situation is even more complicated for Catholics living in countries where they are a tiny minority or where they face limits on their freedom to exercise the faith.

Many of the Synod speeches, he said, emphasized the treasure and the role of the liturgy and the sacraments in attracting people to the faith and in sharing God’s grace with them.

The cardinal also emphasized the evangelizing power of the Church’s social outreach to the sick and the poor, an outreach that makes the Church “the very presence of Christ in the world today.”

If the Synod of Bishops on the new evangelization has seemed to lack a certain “fire and energy,” the gathering’s sober tone reflects the fact that the Catholic Church is “in the midst of an enormous struggle between good and evil,” Australian Cardinal George Pell of Sydney said during the Synod.

“It’s much easier to reorganize a seminary; it’s a different challenge to spark a religious revival,” especially in most modern cultures, the cardinal told reporters at a press conference on October 19. 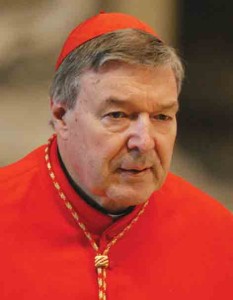 The Synod is not trying to solve all the world’s problems, he said. The new evangelization is about promoting or reviving faith in Jesus Christ, “the call to salvation and the consequences that has for social justice and the integrity of creation.”

“Is Christ the son of God? Is he divine?” Those are questions the bishops are trying to help people answer, Cardinal Pell said. They want people to know that Jesus is “more than just a good example,” he’s the Savior.

While the Holy Spirit “blows where it wills,” he said, bishops must plan and share strategies to protect the Spirit’s initiatives.

Pell agreed that the first 10 days of the Synod may have seemed plodding at times, but said that was largely because the format requires participants to sit in a hall for six hours each day listening to hundreds of speeches. “We had a framework (for the discussions). It’s logical, loving, faith-filled, but we need fire, energy, that’s what the new evangelization is all about,” he said. “We’re in the midst of an enormous struggle between good and evil, faith and fear on a supernatural as well as a natural level. We could do with a bit more bite.”

Pell said bishops in the West constantly are being called to comment publicly on political, ethical and moral matters that touch the faith and the good of the human person. “We bishops have got to be prudent, but we’re all constrained by our vocation to preach the Gospel, to preach what Christ taught,” he said. “Sometimes we have to give the Church’s moral teaching in a political situation where we know it’s almost impossible it’s going to be accepted.”

Pell said the Church’s recognition of saints is an excellent instrument for the new evangelization. Having a saint from one’s own country, he said, shows that “you don’t have to be from a banished millennium or from a world that has disappeared to be a heroic follower of Christ.”

While several Synod members spoke about ways to reach out to lapsed Catholics and bring them back into the fold, Pell said sometimes it is better for a person to leave the Church than to stay and pretend they can be a good Catholic while opposing Church teaching. “Nobody wants anybody to leave the Church,” he said, but if people don’t believe in the divinity of Christ or if they “fundamentally reject the Church’s teachings in areas of morality — fundamentally reject, not just that they are weak and can’t quite follow them — I think that as a matter of integrity, it’s not inappropriate that they do leave.”