Family as a Key to Reading His Pontificate and His Life

Family as a Key to Reading His Pontificate and His Life

In the classroom, the Curia and the Papacy, Benedict treated all as members of a family 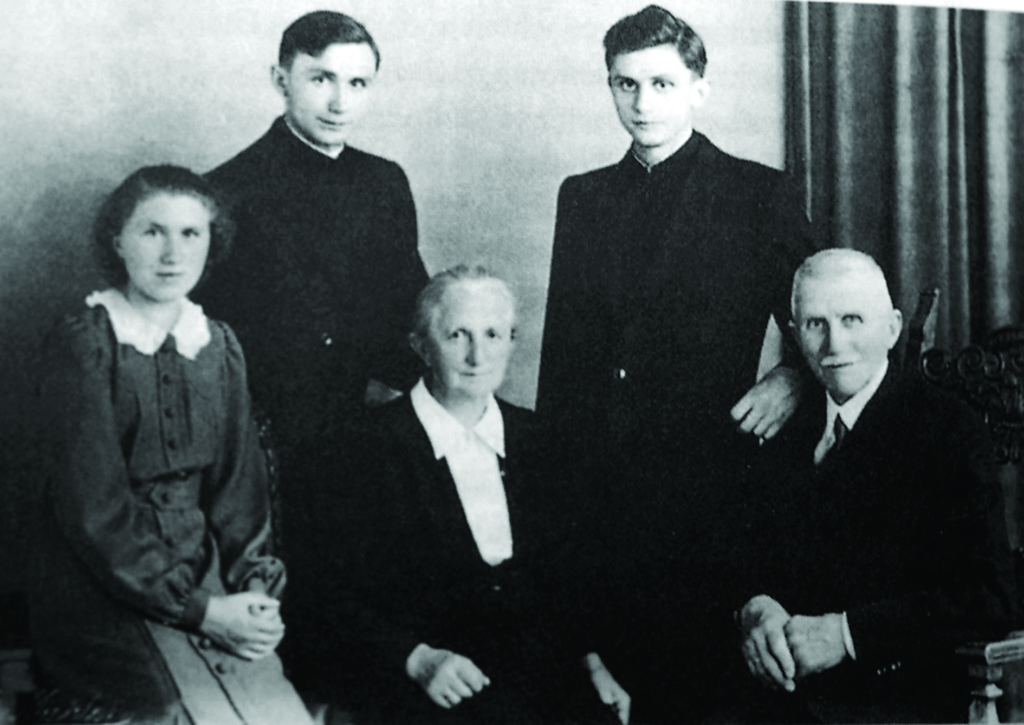 Joseph Ratzinger, top right, is pictured with his family in a 1951 photograph. Next to the future Pope Benedict XVI is his brother, Georg. Seated are his sister, Maria, and his parents, Maria and Joseph. (CNS photo from Catholic Press Photo)

For a long time, we have been struggling to interpret the pontificate of Benedict XVI with the categories of politics and ideology, and those who were perhaps the most refined of us went on to try to prove his theological thought, to understand the how and why of many of his choices. Yet, there is a key to interpreting Benedict XVI that we have often overlooked, which is perhaps the most significant: his bond with his family and the fact that he tended to experience everything in terms of “family.”

All this can be seen from the only actual request that Benedict XVI has made since he became Pope Emeritus: that of organizing a trip to Germany, in the middle of the pandemic, to be able to say goodbye to his brother Georg, who was very ill and at the end of his earthly life.

In the light of that trip of June 2020, we may read not only the entire pontificate of Benedict XVI, but also his entire life.

Benedict XVI was, first of all, a Pope anchored in his life. He and his brother Georg had been ordained on the same day together. Their sister Maria took care of them and never got married. The Ratzinger family remained united, and there had never been a time when they doubted each other.

It was a family raised in the Catholic faith. Everyone in that family cultivated their talents: Joseph was able to carry on his passion for studying brilliantly; Georg grew his love for music with excellent results.

When Benedict XVI returned to Germany in 2020, he reconnected the threads of this family fabric. He went to Pentling to pray at his parents’ grave. He celebrated Mass with his brother Georg. He got back in touch with his roots. He acted as one of the family.

The diocese of Regensburg, also, treated him like one of the family, following his movements step by step, communicating his activities in a daily bulletin, but always discreetly, respecting his privacy as much as possible.

The same happened when Benedict XVI was vacationing in Castel Gandolfo in the summer, and the locals accepted him with so much sympathy that they did not attack him even when, a little late for dinner, he was seen passing by on a golf car, cutting through the town square towards the entrance in the central door instead of retracing his path through all the gardens of the villas.

Thus, where Benedict XVI is, a family is created. When he was elected Pope, Georg Ratzinger confided to Michael Hesemann in the book My Brother, the Pope that his first concern was “the challenge of this office, which now demanded everything of him, and the burden it meant.” But above all, he confided, he was “sad, because now he probably wouldn’t have time for me anymore.”

The pupils of the Schuelerkreis, the circle of former students who had gathered around Cardinal Joseph Ratzinger, were also presumably sad when Paul VI recalled him from his university life to become archbishop of Munich and Freising in 1978. And his pupils were also sad when Cardinal Ratzinger was called to Rome as prefect of the Congregation for the Doctrine of the Faith in 1981. In all cases, they thought he would no longer have time for them.

But his former students and brother were wrong. Benedict XVI never failed to have time for the people he loved. He never formed a real theological school as a theologian, but created a theological family.

People who loved him esteemed him and, above all, appreciated his ideas. He convinced people with the humility of his person and the refinement of his reasoning. He never wanted to be a leader, but this was precisely his strength — in not wanting to be one.

Cardinal Ratzinger maintained this “human” character during his tenure as Prefect of the Congregation for the Doctrine of the Faith. He established a working method that allowed everyone to be part of decisions. There was not only his very particular way of developing condemnations of false theology – never punitive and always explanatory; I think that there are two instructions on Liberation Theology, one that highlights what is good, another that instead is aimed at highlighting what the errors are. There was also the way in which he conducted the meeting of the Feria IV (on Wednesdays), in which everyone had to be involved – everyone had to be, in some way, family.

In a family, no one is left behind. And Benedict XVI does not leave behind the people he loves. This is a key to understanding why he did not ask Cardinal Tarcisio Bertone, Secretary of State, to leave his position when many pushed him to do so. Following this rationale, it could have come as no surprise that Benedict XVI pardoned his unfaithful butler Paolo Gabriele, who leaked documents (and was tried and sentenced for it).

Benedict XVI looks beyond people’s errors; he looks at people and the personal growth of each one. He holds everyone responsible. 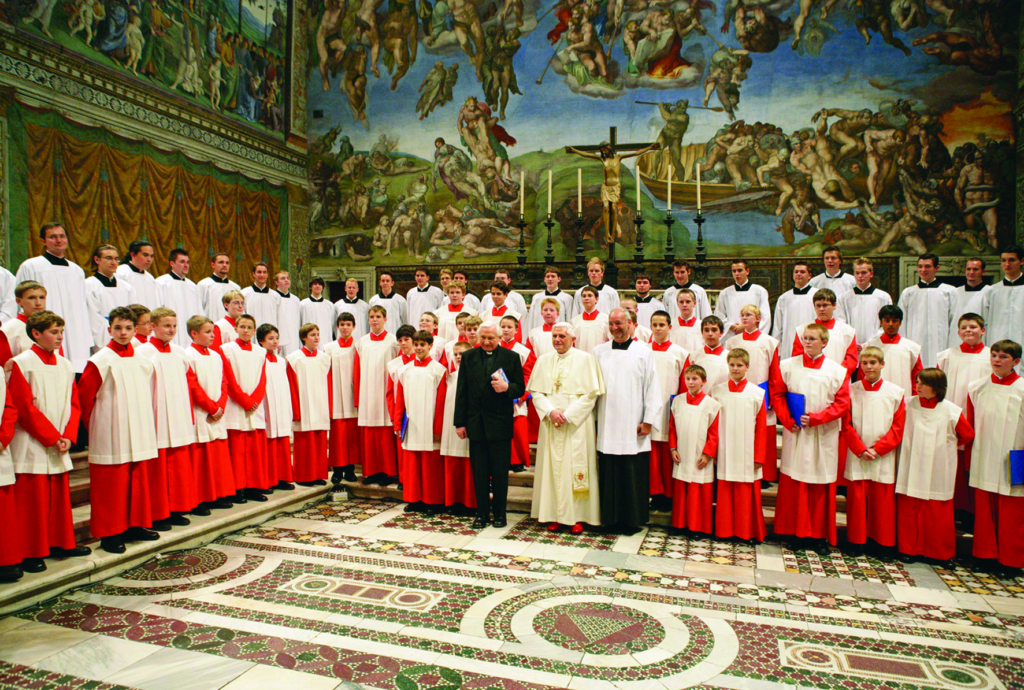 Amid Ireland’s 2010 abuse scandal, he did not respond by asking the bishops to resign. Instead, he accompanied the dioceses with an apostolic visitation, called the bishops to accountability in two meetings in the Vatican (and the Church leaders offered their resignations step by step), and then sent a letter to the Catholics of Ireland, which still today remains one of the masterpieces of his pontificate and one of the most profound interpretations of the ongoing abuse crisis.

Benedict XVI could not understand the plots and intrigue in the Vatican because there could be no such intrigue in a family. There are rivalries and disagreements, but there is also love and reciprocity. The rejection of “biting and devouring,” for example, is highlighted in his 2009 letter rescinding the excommunication of four Lefebvrian bishops.

Benedict XVI wanted the Curia to be a family — and he also felt betrayed by that family. But he never thought of personal vendettas or managing the Curia according to categories of power.

Ultimately, Benedict XVI’s goal was, first of all, to exercise paternity. When we speak of him as a little-loved Pope, we say it only because we read the pontificate through the prisms of politics, ideology and power — all characteristics that did not concern Benedict XVI at all.

But then we have to look at the facts: there was an ever-increasing presence of people attending General Audiences and the Angelus messages at the Vatican, who went there not just to see a leader, but to hear him, to hear his lectures and his readings. They did not count the “image” of the Pope important, but rather, what the Pope said — what truths the Pope transmitted.

The whole pontificate is thus about understanding that family is at the center of everything, starting with the Ratzinger family. It was a humble family, which also gave birth to a Pope who is among the most outstanding contemporary theologians, his sensibilities firmly rooted in unchangeable Tradition, yet so modern that he dared to renounce the pontificate; and his brother, the brilliant musician who for years conducted the Regensburg choir.

To those who ask why Benedict XVI is loved despite everything, despite the ferocious campaigns that have been conducted against him, even though little has been understood about him — the answer lies precisely in his authenticity, in his having always remained himself. He did not become a man of power by taking power. On the contrary, he has served the Truth, always keeping his motto “Cooperatores Veritatis” firm. And he did it by looking at the first substantial example of his life: the family.