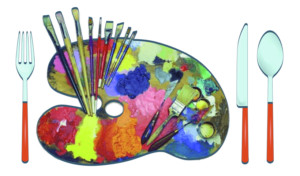 Already an acclaimed artist, at the end of 1508 Raphael (1483-1520) left Florence for Rome, where he lived for the rest of his short life. He was invited to come by Pope Julius II (reigned 1503-13), probably at the suggestion of the architect Donato Bramante, who was working on St. Peter’s Basilica. Bramante came from just outside Urbino, Raphael’s birthplace, and was distantly related to the “divin pictor” (“divine painter”), the biographer Giorgio Vasari’s nickname for Raphael.

Raphael’s first commission was to paint the frescoes for Julius II’s new papal apartments, known as “The Raphael Rooms” and today part of the Vatican Museums and generally regarded as his greatest masterpieces. Julius II’s death in 1513 did not interrupt Raphael’s creativity. Quite the contrary, Raphael had an even closer relationship with Julius II’s successor, Pope Leo X (reigned 1513-21). His close friend and patron Cardinal Bernardo da Bibbiena was also a former tutor, close friend, and advisor of the Medici Pope. Cardinal Bibbiena had a niece Maria who fell in love with Raphael.

Although he didn’t reciprocate, Raphael became officially engaged to Maria so as not to lose favor with the cardinal and the Pope. However, he kept on postponing their marriage. Leo X may have promised to make him a cardinal, but his heart, it seems, belonged to Margherita Luti, the daughter of Francesco Luti, a baker (fornaio) from Siena, who lived on Via del Governo Vecchio just across the Tiber from St. Peter’s.

Although no one cites a date, supposedly the lovers first met after Raphael watched her bathing her feet in the Tiber in a garden near his first Roman home in Trastevere. They would meet in a nearby house, maybe hers, now the restaurant Romolo at Via di Settimiana 8, which specializes in delicious Roman dishes with excellent service. House specialties: cacio e pepe, all’amatriciana, carbonara, trippa, coda alla vaccinara, and saltimbocca.

It’s also said, that, when commissioned by the very rich banker Agostino Chigi to decorate his nearby Villa Farnesina, Raphael couldn’t concentrate on his work until Margherita was allowed to come to live at his side there. She was also one of his models: for his Madonna della Seggiola and his Madonna di Foligno, the kneeling figure in the Vatican Museums’ Transfiguration, the Ecstasy of St. Cecilia, and Galatea. His La Velata and La Fornarina are both her portraits. La Fornarina, identified by Vasari as Raphael’s mistress, wears a blue ribbon on her left arm with the artist’s name. X-rays during restoration in 2012 revealed a ring with a ruby on the third finger of her left hand, which had been painted over by Raphael’s apprentices. Other symbols of the artist’s love for Margherita are the pearls, margarita in Latin, in both canvases. Although generously provided for in his will, on his deathbed Raphael sent Margherita away. At the time there were rumors that they’d been secretly married in spite of her humble origins. A document discovered in 1897 reports that she retired to the Convent of Santa Apollonia in Trastevere four months after Raphael’s death, registered as “widow Margherita.”

Instead, Maria, who died a maiden before Raphael, may be buried with him in the Pantheon. Raphael or his apprentices installed a memorial plaque to her there. All three carried the truth to their graves. Their story has been the subject of numerous artworks: by Ingres, Dante Gabriel Rossetti, Turner and Picasso, to name just a few.

For a very special meal overlooking the Pantheon, head to rooftop “Idylio by Apreda” in the 5-star Pantheon Iconic Rome Hotel. Only six months after opening last year, Neapolitan Chef Francesco Apreda, formerly executive chef at Imagò, the rooftop restaurant in the deluxe Hassler Hotel at the top of the Spanish Steps, was awarded a Michelin star.

You can order à la carte or choose among three tasting menus: “Inside the Pantheon,” or Rome through Apreda’s eyes (120 euros); “Iconic Signature by Apreda” (140 euros), a journey through Apreda’s experience of gourmet dishes from around the world; or “Seasons at the Pantheon” (160 euros).