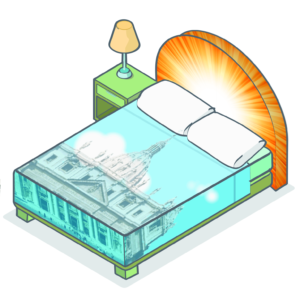 The non-profit Association Ospitalità Religiosa Italiana (Italian Religious Hospitality) (www.ospitalitareligiosa.it), headquartered at Via Molina 10 in Varese, a city in Lombardy northwest of Milan, tel. 327-3842841, counts some 4,000 “religious places to stay” in Italy, with a total of some 287,000 beds. These include guesthouses, holiday houses, B&Bs, campsites, hostels, and hermitages, convents, and monasteries which open to visitors on vacation and to students.

Of these “stays,” 1,818 with 113,356 beds are administered directly by religious personnel; 1,487 with 123,985 beds belong to a religious order but are run by laypeople; 189 with 13,157 beds belong to non-profit Christian associations and 447 with 36,301 beds are run by laypeople for profit but specialize in accommodations for religious groups. Of all these, 817 have facilities for the disabled, 1,209 for sports activities, and 1,120 for meetings. Many are particularly appropriate for families and several accept pets.

No other country, not even Spain, offers similar “religious” hospitality. They are found in all 20 regions of Italy with the largest number, some 600, logically in Lazio, the province of Rome, with many in Rome and several within walking distance to Vatican City. I’ve described a few in my “Food For Thought”: Want a Cheap Room Near the Vatican? Try Via Monte del Gallo,” ITV, February 2015. Others nearby that I can recommend and that are also on O.R.I.’s website are Centro Boemo Velehrad at Via delle Fornaci #200; Emmaus Hotel at Via delle Fornaci #25; and Holiday Home Santa Maria alle Fornaci at Piazza Santa Maria delle Fornaci #27. Farther afield: Villa San Giovanni at Via del Casale di San Pio V, #1 and Hotel Santa Prisca at Largo Manlio Gelsomini #25.

The Association’s multilingual (Italian, English French, Spanish, Portuguese, and German) state-of-the-art website lists them all. Each entry has a photograph and icons of all the services offered as well as a description of nearby transportation and tourist attractions. Most “stays” include breakfast and Wi-Fi and accept credit cards. Thus you only need to make a few clicks to check out and book the “stay” that best fulfills your needs. There’s even an entry with a list of the O.R.I. “stays” that have never closed during lockdown.

Sadly, but predictably, in mid-May, I received an alarming press release from Fabio Rocchi, the Association’s President. Its headline was: “Religious hospitality in Italy is on its knees, and this time not for prayer.” The bad news is that only half of the website’s entries (not yet specified which ones) will definitely reopen this summer. One in three is waiting to see how the COVID-19 pandemic evolves before making a decision. About 200 have decided not to reopen in 2020 and another 100 not to reopen ever again.

The entries’ economic loss is estimated to have been 5 million euro a day during the lockdown, which not only damages access to affordable tourism but more importantly diminishes the finances of the many Church-supported schools and charitable parochial groups in Italy but also in the Third World that receive contributions from these “religious stays.”

Yet the press release is not totally pessimistic. The good news is, that in spite of their overwhelming lost income and the expenses of sanitizing their premises, all of the “religious stays” that are definitely reopening have decided not to lay off any of their employees and not to raise their prices. In fact, many have decided to lower their prices even if three-quarters of them expect to lose between 40 and 90 percent of their income in 2020.

Needless to say, it is well known that tourism is one of Italy’s main industries, the country’s petroleum. It accounts for c. 12% of its GDP and c. 13% of its total national employment. In 2019 it contributed 40 billion euro to the economy, 6% more than the year before. Rocchi’s press release is undoubtedly an attempt, with the help of us journalists, to gain the government’s attention, intervention and protection for religious tourism. If you can, come to Italy…