God’s self-revelation through signs, and the unity of Scripture 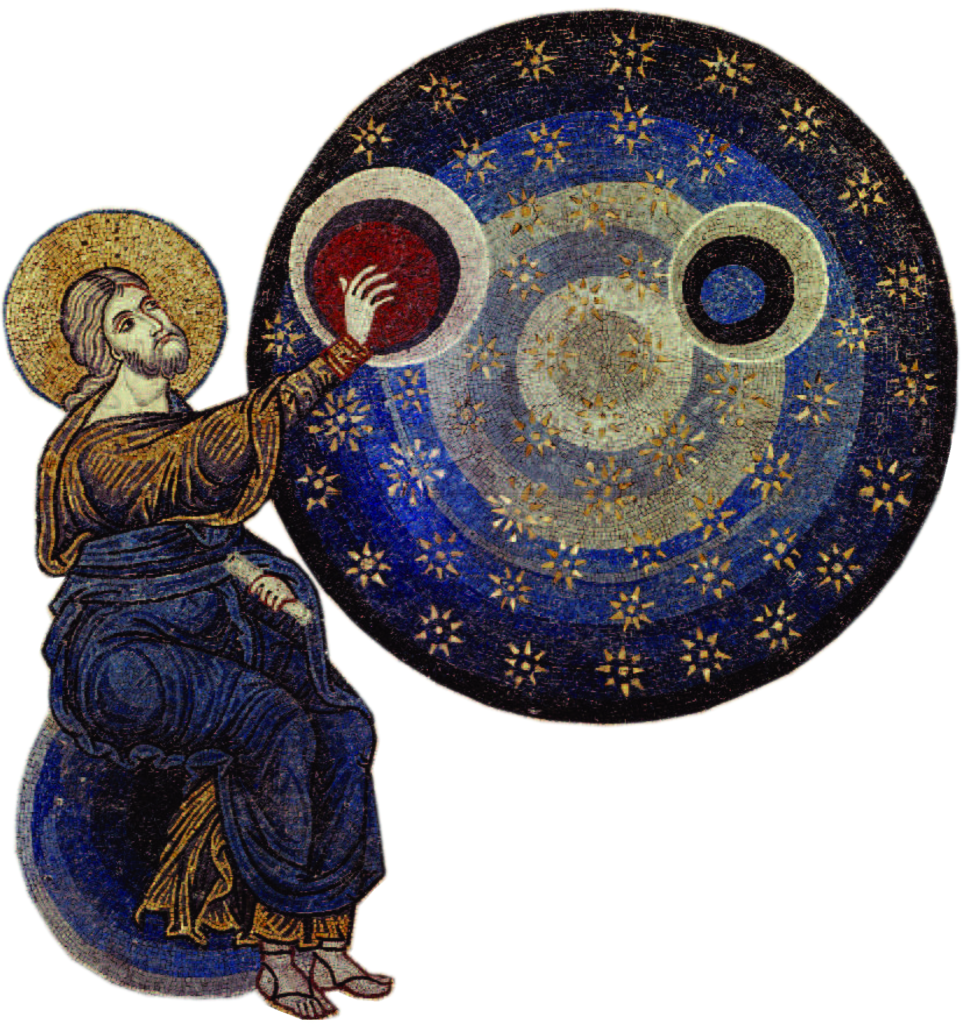 Close-up of the mosaic of Creation in the Duomo of Monreale (just outside of Palermo, Sicily)

Biblical scholars have long agreed that there are four ancient sources for the Pentateuch, the first five books of the Bible. They have labeled them J, for the Jahwist, who names God with the tetragrammaton IHWH; E, for the Elohist, who names God Elohim; P, for a Priestly source associated with the religious reforms under King Josiah, and D, for the postexilic Deuteronomist. They generally agree that the sources were using texts and traditions that were ancient indeed, and the Bible itself mentions historical books that we do not have. These scholars are by no means always certain how to assign every verse.

I am not going to dispute the theory here. What strikes me, when I read Genesis, is not that it is a patchwork, but that it is a staggeringly unified whole, with each incident reflecting in a variety of ways upon every other. It is like an epic written by a master poet. We who believe that the Bible as we have it is the word of God must, it seems to me, approach it as a whole, of course, allowing for development within the whole, as God’s self-revelation to the children of Israel was not a set of theological theorems shining in intellectual splendor, but an intensely personal story of divine light dawning upon human darkness.

Much of the sense of unity is softened in translation. Let me give an example. When God creates the great luminaries in the heavens, the sun and the moon and the stars, the sacred author, said to be P, says that God set them there to be signs, to mark seasons and days and years (Gen. 1:14). It is a sword to the heart of the pagan astral systems, that made the lights out to be divine. Here they are creatures, no less than grasses and fruit trees are, which God has already made. Light and warmth already do their work. Now God gathers them up into distinct lights, whose chief role is liturgical. Just as creation is all oriented toward the seventh day, the Sabbath rest, so the heavens mark time for yearly and seasonal feasts.

The Hebrew for sign is ’oth. The next time we meet it, it is in the context of a feast. It is harvest time, and Cain and Abel have made offerings to the Lord. Cain has offered of “the fruit of the ground,” and Abel of “the firstlings of his flock and the fat thereof” (4:3-4). God accepts Abel’s offering but does not accept Cain’s. We are not told why. Perhaps Cain did not make his offering from a generous heart. When Cain goes away disgruntled, God reproaches him rather gently, advising him to do well and not ill. But Cain takes Abel aside and murders him. It is the first bloodshed, and it is followed not by the first plea for leniency. “Every one that findeth me shall slay me,” says Cain. So the Lord says that whoever slays Cain shall be punished sevenfold, and he “set a mark upon Cain, lest any finding him should kill him” (14-15). The Hebrew for mark is the same ’oth.

This second text, they say, is from J, the Jahwist, but what we ought to say is that one mind has made the sources, whatever they may have been, into one. The word that pointed to the beautiful signs in the heavens, signs for the worship of God, “the moon and the stars, which thou hast ordained,” as the Psalmist says (Ps. 8:3), now points to a sign of alienation, like an indelible blemish. Cain is, literally, a marked man. He will not be murdered, but he will always be known as a murderer. So does evil divide and make small. 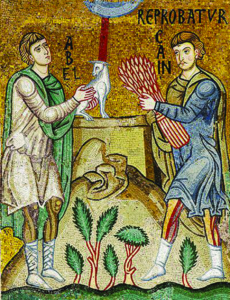 The Offerings of Abel and Cain, mosaic in the Cappella Palatina in Palermo

God alone can obliterate such a mark, the dye of blood and sin. That is accomplished ultimately by Christ and in Christ, but in the meantime, God does turn the mark against itself. For when the children of Israel await the tenth plague of Egypt, the death of the firstborn, they are to eat the first Passover, and to splash their doorposts and lintels with the blood of a yearling ram, unblemished, so that the angel of death will pass them by. “And the blood shall be to you for a token upon the houses where ye are,” says God to Moses (Ex. 12:13). The Hebrew for token, again, is ’oth.

We may well think here of the most important sign God promises to give to his people, as faithless as they so often are. It is promised to the wicked king of Judah, Ahaz, who was apostate in every conceivable way, sacrificing his son to Moloch (2 K. 16:3), robbing the temple to bribe the king of Assyria to come to his help (8), and ordering the chief priest to refashion the altar according to what the Assyrians do (10). The Lord speaks to Ahaz through the prophet Isaiah, saying, “Ask thee a sign of the Lord thy God; ask it either in the depth or in the height above” (Is. 7:11). Ahaz declines, with a show of piety. He will not ask. To which the Lord replies: “Is it a small thing for you to weary men but will ye weary my God also? Therefore the Lord himself shall give you a sign; Behold, a virgin shall conceive, and bear a son, and shall call his name Immanuel” (13-14). The Hebrew for sign, here too, is ’oth.

It is the smallest and most intimate sign of all, and the greatest, beneath all depths and beyond all heights.

Anthony Esolen, Ph.D., is a faculty member and Writer-in-Residence at Magdalen College of the Liberal Arts in New Hampshire. Dr. Esolen is a renowned scholar and translator of literature and an author of multiple books and hundreds of articles in both Catholic and secular periodicals.