More than a century ago, Monsignor Robert Hugh Benson foresaw the rise of secular humanism,  the contraction of the Catholic Church, and the coming of the Antichrist… 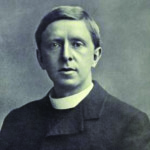 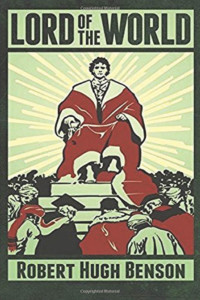 LORD OF THE WORLD

There was an exclamation, then silence, as a tall, beautiful girl with flushed face and shining grey eyes came forward and stopped, followed by a man whom Percy knew at once from his pictures. A little whimpering sounded from the bed, and the priest lifted his hand instinctively to silence it.

“Why,” said Mabel; and then stared at the man with the young face and the white hair.

Oliver opened his lips and closed them again. He, too, had a strange excitement in his face. Then he spoke.

“Who is this?” he said deliberately.

“Oliver,” cried the girl, turning to him abruptly, “this is the priest I saw—-”

Percy drew a breath to steady that maddening vibration in his throat. “Yes, I am a priest,” he said.

Again the whimpering broke out from the bed; and Percy, half turning again to silence it, saw the girl mechanically loosen the clasp of the thin dust cloak over her white dress.

“You sent for him, mother?” snapped the man, with a tremble in his voice, and with a sudden jerk forward of his whole body. But the girl put out her hand.

“Yes, I am a priest,” said Percy again, strung up now to a desperate resistance of will, hardly knowing what he said.

“And you come to my house!” exclaimed the man. He came a step nearer, and half recoiled. “You swear you are a priest?” he said. “You have been here all this evening?”

“And you are not—-” he stopped again.

Mabel stepped straight between them.

“Oliver,” she said, still with that air of suppressed excitement, “we must not have a scene here. The poor dear is too ill. Will you come downstairs, sir?”

Percy took a step towards the door, and Oliver moved slightly aside. Then the priest stopped, turned and lifted his hand. “God bless you!” he said simply, to the muttering figure in the bed. Then he went out, and waited outside the door.

He could hear a low talking within; then a compassionate murmur from the girl’s voice; then Oliver was beside him, trembling all over, as white as ashes, and made a silent gesture as he went past him down the stairs.

The whole thing seemed to Percy like some incredible dream; it was all so unexpected, so untrue to life. He felt conscious of an enormous shame at the sordidness of the affair, and at the same time of a kind of hopeless recklessness. The worst had happened and the best—that was his sole comfort.

Oliver pushed a door open, touched a button, and went through into the suddenly lit room, followed by Percy. Still in silence, he pointed to a chair, Percy sat down, and Oliver stood before the fireplace, his hands deep in the pockets of his jacket, slightly turned away.

Percy’s concentrated senses became aware of every detail of the room—the deep springy green carpet, smooth under his feet, the straight hanging thin silk curtains, the half-dozen low tables with a wealth of flowers upon them, and the books that lined the walls. The whole room was heavy with the scent of roses, although the windows were wide, and the night-breeze stirred the curtains continually. It was a woman’s room, he told himself. Then he looked at the man’s figure, lithe, tense, upright; the dark grey suit not unlike his own, the beautiful curve of the jaw, the clear pale complexion, the thin nose, the protruding curve of idealism over the eyes, and the dark hair. It was a poet’s face, he told himself, and the whole personality was a living and vivid one. Then he turned a little and rose as the door opened, and Mabel came in, closing it behind her.

She came straight across to her husband, and put a hand on his shoulder. “Sit down, my dear,” she said. “We must talk a little. Please sit down, sir.”

The three sat down, Percy on one side, and the husband and wife on a straight-backed settle opposite.

The girl began again. “This must be arranged at once,” she said, “but we must have no tragedy. Oliver, do you understand? You must not make a scene. Leave this to me.”

She spoke with a curious gaiety; and Percy to his astonishment saw that she was quite sincere: there was not the hint of cynicism.

“Oliver, my dear,” she said again, “don’t mouth like that! It is all perfectly right. I am going to manage this.”

Percy saw a venomous look directed at him by the man; the girl saw it too, moving her strong humorous eyes from one to the other. She put her hand on his knee.

“Oliver, attend! Don’t look at this gentleman so bitterly. He has done no harm.”

“No harm!” whispered the other.

“No—no harm in the world. What does it matter what that poor dear upstairs thinks? Now, sir, would you mind telling us why you came here?”

Percy drew another breath. He had not expected this line. “I came here to receive Mrs. Brand back into the Church,” he said.

“Would you mind telling us your name? It makes it so much more convenient.”

Percy hesitated. Then he determined to meet her on her own ground.

“Certainly. My name is Franklin.”

“Father Franklin?” asked the girl, with just the faintest tinge of mocking emphasis on the first word.

“Well, then, Father Percy Franklin; can you tell us why you came here? I mean, who sent for you?”

“Oh, very good… May we know what good comes of being ‘received into the Church?’”

“By being received into the Church, the soul is reconciled to God.”

Percy stood up abruptly. “This is no good, madam,” he said. “What is the use of these questions?”

The girl looked at him in open-eyed astonishment, still with her hand on her husband’s knee.

“The use, Father Franklin! Why, we want to know. There is no church law against your telling us, is there?”

Percy hesitated again. He did not understand in the least what she was after. Then he saw that he would give them an advantage if he lost his head at all: so he sat down again.

“Certainly not. I will tell you if you wish to know. I heard Mrs. Brand’s confession, and gave her absolution.”

“She ought to receive Holy Communion, and anointing, if she is in danger of death.”

“Oliver!” cried the girl entreatingly. “Please leave this to me. It is much better so.—And then, I suppose, Father Franklin, you want to give those other things to my mother, too?”

“They are not absolutely necessary,” said the priest, feeling, he did not know why, that he was somehow playing a losing game.

“Oh! they are not necessary? But you would like to?”

“I shall do so if possible. But I have done what is necessary.”

It required all his will to keep quiet. He was as a man who had armed himself in steel, only to find that his enemy was in the form of a subtle vapour. He simply had not an idea what to do next. He would have given anything for the man to have risen and flown at his throat, for this girl was too much for them both.

“Yes,” she said softly. “Well, it is hardly to be expected that my husband should give you leave to come here again. But I am very glad that you have done what you think necessary. No doubt it will be a satisfaction to you, Father Franklin, and to the poor old thing upstairs, too. While we—- we—” she pressed her husband’s knee— “we do not mind at all. Oh!—but there is one thing more.”

“If you please,” said Percy, wondering what on earth was coming.

“You Christians—forgive me if I say anything rude—but, you know, you Christians have a reputation for counting heads and making the most of converts. We shall be so much obliged, Father Franklin, if you will give us your word not to advertise this—this incident. It would distress my husband, and give him a great deal of trouble.”

“One moment… You see, we have not treated you badly. There has been no violence. We will promise not to make scenes with my mother. Will you promise us that?”

Percy had had time to consider, and he answered instantly.

“Certainly, I will promise that.”

“Well, that is all right. We are so much obliged… And I think we may say this, that perhaps after consideration my husband may see his way to letting you come here again to do Communion and—and the other thing—-”

Again that spasm shook the man beside her.

“Well, we will see about that. At any rate, we know your address, and can let you know… By the way, Father Franklin, are you going back to Westminster to-night?”

“Ah! I hope you will get through. You will find London very much excited. Perhaps you heard—-”