“Hitler’s Pope” or “Righteous Among Gentiles”?

“Hitler’s Pope” or “Righteous Among Gentiles”? 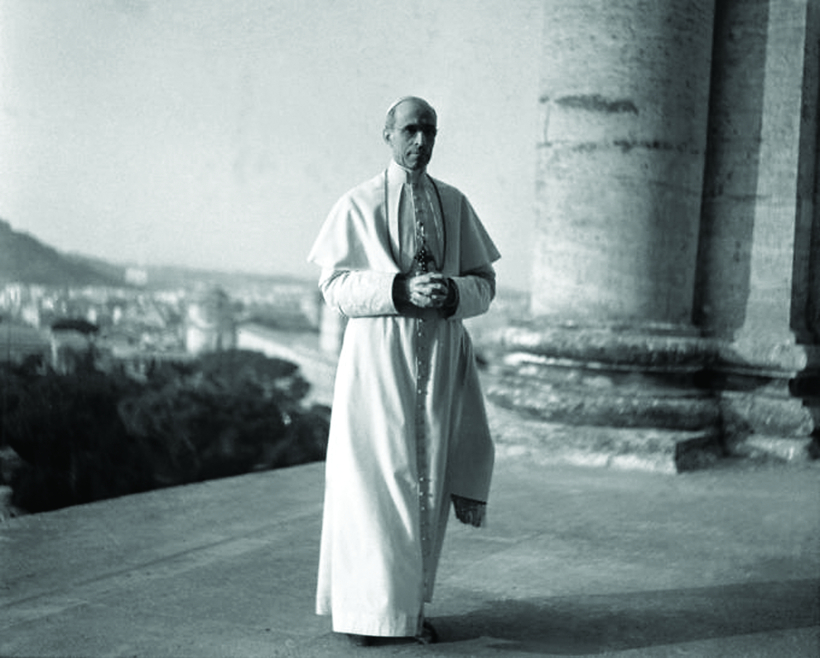 Pope Pius XII, who led the Catholic Church from 1939 to 1958, is pictured in his undated photo. (CNS photo/Vatican Media)

Will the documents shed new light on the pontificate of Pius XII? This question can be answered by industrious historians henceforth: on March 2, the Vatican opened, for the first time, the archives of documents regarding Pius XII and his actions during World War II. The archivists have already said that they do not expect great surprises. 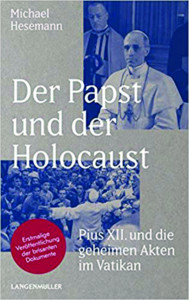 The Pope and the Holocaust 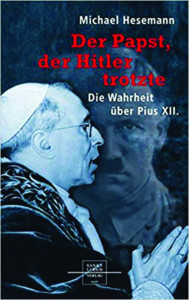 The Pope Who Defied Hitler

Specialist on the topic is German historian Michael Hesemann, who argued in his books (The Pope and the Holocaust and The Pope Who Defied Hitler) that Pius XII deserves beatification and canonization for his personal responsibility in saving hundred of thousands of Jews and more.

Inside the Vatican special correspondent Jan Bentz had a chance to interview him about the opening of the archives.

Inside the Vatican: Dr. Hesemann, you have already done extensive research on Pius XII. What are you most looking forward to researching in the newly-opened archives?

DR. MICHAEL HESEMANN: Indeed, we had a pretty good idea about the extent of the Pope’s and the Vatican’s humanitarian help during the Holocaust because many of the most important documents were already published. In 1963, as a reaction to Rolf Hochhuth’s scandalous play, The Deputy, Pope Paul VI ordered a team of four renowned historians of the Society of Jesus (the Jesuits) to go through the undisclosed files from Pius XII’s pontificate and publish everything relevant in a scientific edition. They did so, with about 5500 documents in eleven volumes of about 7300 pages. Also, Paul VI opened the beatification process of Pius XII and gave the postulator, another Jesuit Father, permission to go through all those files.

When the process was over and Pope Benedict XVI was presented with the verdict of the Congregation for the Causes of Saints, he sent another historian into the archives to verify their conclusion before he signed the decree on the heroic virtues of Pius XII. Also, our independent research as historians of the Pave the Way Foundation (PTWF.org), based in New York, forwarded thousands of hitherto-unknown documents demonstrating that Pius XII indeed did everything humanly possible to save as many Jewish lives as he could. 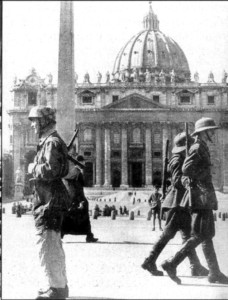 On March 2, 2020, I was one of the 25 first historians who got access to the newly-released archive documents which were made available for qualified experts. Personally, I doubt that there will be any dramatic, big surprises, but for sure many interesting, small surprises. There are, of course, several aspects I look for. For example,I am trying to find any written order or at least a document confirming that such an order came directly from the Pope to open the Roman monasteries for the Roman Jews after the razzia (Nazi round-up) of October 16, 1943. Last week, I found the evidence that the Vatican requested 550 placards signed by the German Army’s town commander, General Stahel, declaring those monasteries “Property of the Holy See” and forbidding German soldiers and SS-troops to enter them. Believe it or not, they all followed this order and indeed all those places remained untouched during the nine months of German occupation. In 235 of those monasteries, about 4400 Roman Jews were hidden and survived.

The historical myths (of Hochhuth and others) that Pius was a collaborator of Hitler’s have been widely refuted by your previous books. Have you had any new insights from your most recent studies? What remains to prove and to demonstrate?

For sure, Pius XII was neither “Hitler’s Pope” nor did he consider the Nazis helpful in the fight against Communism. That’s a black legend which had its origin in Moscow (where it was already claimed in early 1945 and considered “rather comical” by Goebbels who commented on it in his diaries) and was brought on stage in Berlin/Germany by Erwin Piscator, a Communist director, who had just returned from Moscow to Berlin, bought the “Freie Volksbühne” with Soviet money, and edited Hochhuth’s amateurish play which was commissioned by the KGB. Indeed, already by 1925, Pius XII considered National Socialism “the most dangerous heresy of our times.” He called Hitler “an untrustworthy scoundrel” and “a fundamentally wicked person” in 1937, and supported the German military opposition’s plan to overthrow or even kill Hitler as early as October 1939. When the Nazis hoped he would bless their invasion into Russia as a “crusade against Bolshevism,” he replied that it was rather “one devil hunting the other and the one is worse than the other.”

In fact, he openly protested against the Holocaust thrice, in a way everyone understood, although without naming the persecutors and their victims. He did so because he knew that any open provocation of the Nazis would only be counterproductive; it would help nobody, increase the speed of killing, and destroy all possibilities to help the persecuted Jews.

Instead of buying the applause of the civilized world with the blood of innocent Jews, his motto was “help and save as many Jewish lives as possible for any price.” And the numbers are impressive. More than 960,000 Jews owe their lives to the diplomatic interventions and the humanitarian actions of Pius XII.

It was impressive to see the sheer numbers of pleas for help, often enough from individuals or families, which were all answered with great care. In nearly all cases, Rome was contacted, countries which could potentially supply visas were contacted, and so much was done.

In 1943, Catholic institutions in the south of France had hidden away about 3,000 Jewish orphans whose parents were already deported to the death camps.

When the Germans took over control of this area, the bishops decided it would be safer for both the Jewish orphans and theCatholic institutions to bring those orphans into secure countries. And indeed, with the help of the nuncio in Bern, Switzerland, and the bishop of Grenoble, several embassies were contacted, and eventually the US, Canada, and the Dominican Republic were willing to accept one thousand each.

In another case, in the winter of 1943/44, the nuncio in Bern learned that about 250 Jews who had already gotten South American passports from the Vatican were being held in a concentration camp in Vittel, France, with the danger of being deported to the death camps. The nuncio tried everything, wrote to every SouthAmerican country, without success. Only Brazil was willing to accept one Jewish family; all the others said no. He then wrote to the US Embassy and got a shocking reply: “The U.S. government has advised Latin American countries that they are not expected” to admit those individuals. A few weeks later they were all deported to Auschwitz. 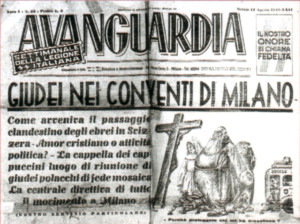 The front page of a Fascist paper that accused the Church of hiding Jews in the convents of Milan.

But maybe the key document which surfaced during this first week was a handwritten note by Pius XII himself.After the razzia on October 16, 1943, the Vatican Information Service wanted to report: “On the night of 15-16 October a considerable number of Jews were arrested in various parts of Rome (stop) after being held 24 hours in the military college were transported to an unknown destination (stop) it is said here that the Holy See was concerned that similar events should not be repeated and in favor of particular cases.” This ended up on the desk of the Pope, who commented: “Is it prudent for the press service to send this news?” Pius XII then added that he was “well aware that it would not help to wake sleeping dogs, especially not Nazis, to humanitarian actions originating from the Apostolic Palace.” He did everything to help Jews — but prudently, in secrecy!

More than 150 people have applied for access to the archives; do you think that there will be contrary or even contradictory results in the research?

Of course the interpretation of documents varies. For example, we found three horrible photos in the files of the nunciature in Bern, sent there by an anonymous eyewitness, showing a mass execution of Jews: first six or seven naked men in a row, starved and bowed, then a pile of human bodies in a trench, eventually the naked body of a man, according to the eyewitness still alive, thrown on top of that pile. They arrived there on April 6, 1943 and reached the Vatican three weeks later. My German colleague, Prof. Wolf, a Pius-debunker, commented in a German magazine: “The Pope knew about the Holocaust — and remained silent.” I commented two days later in the same magazine: “The Pope knew about the Holocaust — and tried to help.” 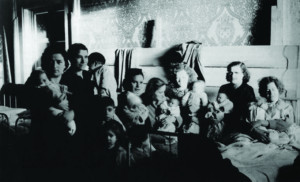 Indeed, Pius XII learned about those horrible mass executions in the summer of 1941. To verify the reports, he sent a long-time friend, the Roman priest Fr. Pirro Scacvizzi, an army chaplain of the Knights of Malta, to the Eastern front. In November, Fr. Pirro returned to Rome, was received by the Pope, told him what he learned, “and saw him crying like a child and praying like a saint,” as he noted later. Yes, he knew about the mass killings, phase one of the Holocaust. He also heard rumors about the death camps, but only had evidence about them rather late — probably in June 1944, when he protested the deportation of the Hungarian Jews in a telegram to the Hungarian head of state, Horthy, and, indeed, moved him to stop the trains to Auschwitz — one even returned right from the border. That’s why he did so much to save as many Jews as possible. But he also knew that any open protest, any provocation of the Nazis, would have been counterproductive and just cost an immense number of both Jewish and Catholic lives.

Rumors have it that Pius XII tried to exorcise Hitler and identified the Nazi ideology as “satanic”; are these beliefs substantiated?

Absolutely, yes. Several eyewitnesses of the inner circle around Pius XII confirmed those exorcisms under oath; you find their testimonies in the Positio of the beatification process. Pius XII called National Socialism a “satanic” doctrine several times, for example, in his homily on June 2, 1945, right after the war.

How will the new research impact the eagerly-awaited beatification process of Pius XII – do you have any insights or information?

Until now, critical voices used to say: “We have to wait for the beatification of Pius XII until theArchives are open— who knows what will come up there.” Even in Yad Vashem, the Holocaust memorial in Jerusalem, the placard on Pius XII says: “Until all relevant material is available to scholars, this topic will remain open to further inquiry.”

Now all material is available to scholars and all American, Israeli, and European experts are welcome to go through it personally. If they come with an open mind, they will be overwhelmed by the evidence of humanitarian help. But of course there are also those who will keep on saying: “Don’t bother me with the facts, I already made up my mind.” Nothing, not the best evidence, will convert them. But, for sure, they will soon be a minority. The truth about Pius XII will make us grateful – grateful to see true charity in action, to see there was still a light even in the darkest hour of human history.