Francis has personally directed his closest collaborators, the cardinals and archbishops of the Roman Curia, to take turns hearing daily confession in the Church of Santo Spirito in Sassia, an ordinary Roman church outside of the Vatican. (It is just down the street from the Vatican, at via dei Penitenzieri #12, next to the Santo Spirito hospital and across the street from the Curia Generalizia of the Jesuit Order.)

And it is even possible that the Pope himself, at a time of his choosing, will go to this church, in coming weeks, at 3 p.m., to hear confessions. (Pope Francis made a brief, unannounced stop at this church in April, as I reported at the time.) 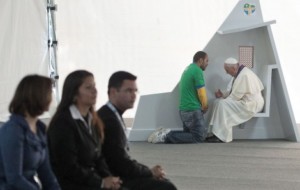 Pope Francis hears the confession of a man while in Rio de Janeiro. source

Santo Spirito in Sassia is the church in Rome dedicated specifically to the Divine Mercy devotion announced by St. Faustina Kowalska 80 years ago and promoted by Pope John Paul II, who died on the Feast of Divine Mercy. The center of the devotion is the belief that God’s mercy, God’s love for sinful human beings even though they are undeserving of that love, is always available, no matter what sins may have been committed.

This initiative expands an already existing one.

For several weeks, the man who has become known as “the Pope’s arms and hands” in Rome, because he works bringing the Pope’s help to the poor of the city, Archbishop Konrad Krajewski, hears confessions daily at 3 p.m. in the first confessional on the right as one enters the church.

The announcement of the Pope’s initiative was made this evening after the 6:30 p.m. Sunday Mass by the parish priest, Father Jozef Bart, who is from Poland.

“And do you think the Pope himself may actually come to hear confession?” I asked.

“Because he wishes to emphasize the importance of confession, and of God’s great goodness in forgiving human sin.”

The new initiative began already on Friday afternoon at 3 p.m., when Archbishop Beniamino Stella, the newly-named head of the Vatican’s Congregation for the Clergy, the office with oversight authority over all of the priests in the Church worldwide, entered one of the confessionals near the front of the church and began to hear confessions from ordinary Romans and pilgrims.

The initiative is scheduled to continue this week, though the list of which cardinal or archbishop will be present which day is not yet finalized, don Jozef said.

It is an old Church tradition that one of the best ways to prepare for Christmas, for the coming of the Christchild into the world, is to go to confession.

And so, implicitly, what Pope Francis is asking of all Catholics during these final days of Advent, is to go to confession…

Let’s follow Pope Francis’s guidance in this matter, in these nine days before Christmas.