Mary’s Holy Communion and Ours

Mary’s Holy Communion and Ours

Reflections on The Contemplative Riches of the Mass

Quotations are from Iota Unum, by Romano Amerio, and Mother of Our Savior and the Interior Life, by Reverend Reginald Garrigou-Lagrange, O.P. 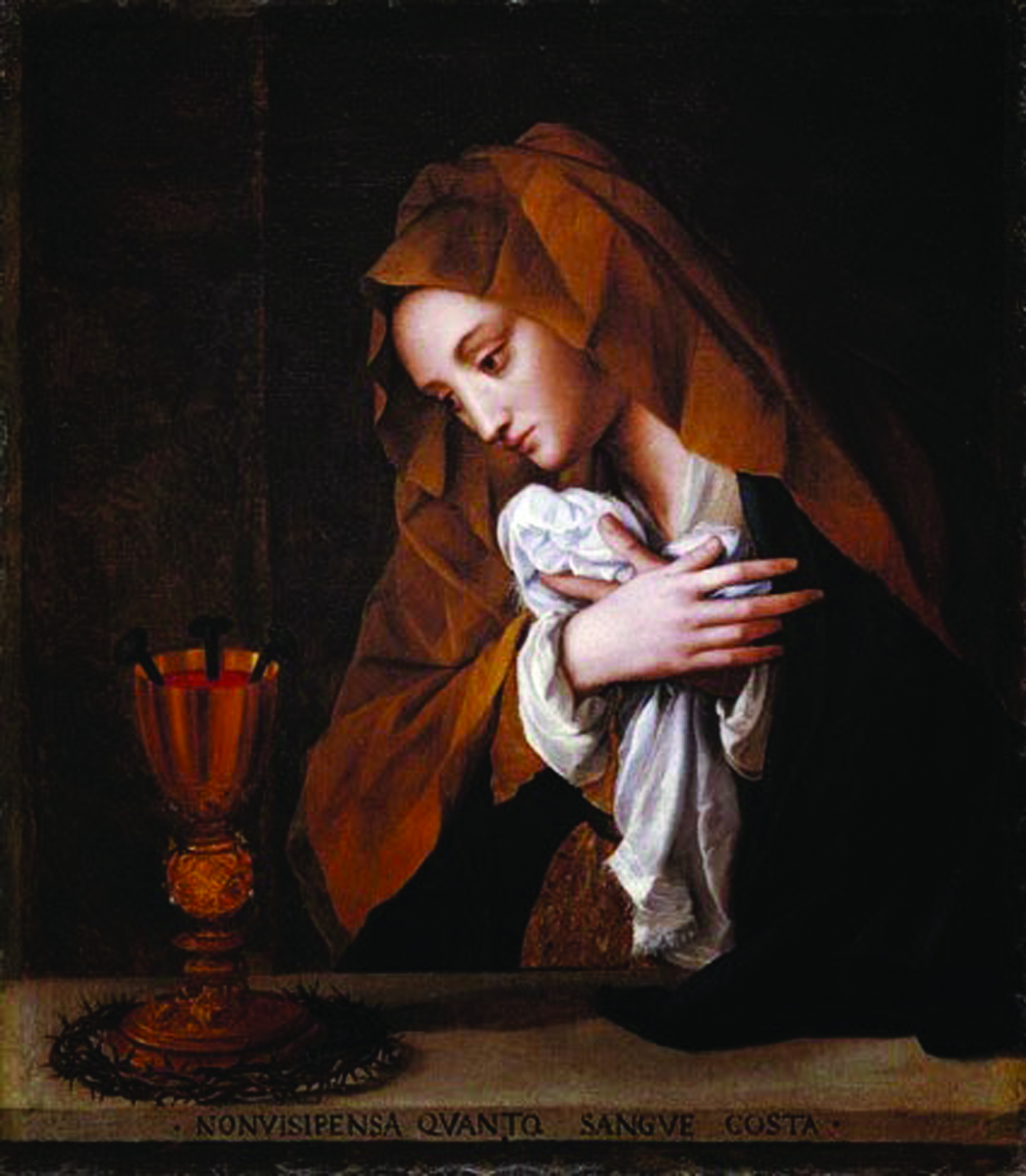 The Grieving Madonna with the Symbols of Christ’s Passion by Allesandro Allori, Uffizi Gallery, Florence, Italy

At the consummation of a Mass, the communicant is invited to enclose himself in the Eucharistic Heart of Jesus, and also to have the Eucharistic Heart enclosed within his own heart. This must have been the way Our Lady was all the time, and especially with regard to receiving her Son and Lord in Holy Communion during the days of her exile on earth. Fr. Reginald Garrigou-Lagrange writes:

“Her love of God, like an intense thirst, was accompanied by a sweet suffering which ceased only when she died of love and entered on the union of eternity. Such was her desire of the Eucharist. Jesus for His part desired most ardently to consummate Mary’s holiness, to communicate to her the overflowing riches of His Sacred Heart.”

“If He could suffer in glory, He would suffer from the resistance we offer to the same desire He has in our regard. But He found no resistance in Mary. And so He was able to communicate Himself to her in the most intimate way possible for two lives to be fused into one on earth: Jesus’ union with Mary was a reflection of the sanctifying union of the Word with the Sacred Humanity, an image of the communion of the Three Divine Persons in the one infinite Truth and the one limitless Goodness.”

The “sweet” suffering of longing to receive God in Holy Communion is a suffering for which one must pray. God will grant it, but this is a prayer not many will be prepared to make. This sweet suffering of desire rarely satisfies the emotions and senses, and mostly causes pain to our lower faculties. Resistance to the advances of Divine Love in Holy Communion comes about whenever there is an absence of holy awe for Holy Communion. Attachment to personal feelings, personal interests, personal opinions, and other pettiness is a sure way to forget holy awe when approaching the communion rail. Our Lady had none of these attachments.

Instead, an effort to shun these worldly attachments to focus on consuming the God-man in the flesh, will make one become like Our Lady in her Holy Communions. “Mary became again the pure living tabernacle of the Lord when she communicated—a tabernacle which knew and loved; one a thousand times more precious than any golden ciborium; a true tower of ivory, house of gold, and ark of the alliance.”

Again, Our Lord may not find too many “takers” for His invitation to the degree of mutual vulnerability required for a “holy” Communion. The good effects in the soul are enough to scare away many who want to keep their lives as comfortable as possible. “What were the effects of Mary’s communion? They surpassed anything St. Teresa recounts of transforming union in the Seventh Mansion of the Interior Castle. Transforming union has been compared, in its power to transform the soul in some way into God by knowledge and love, to the union of fire with a piece of iron, or that of light with the air it illumines. Rays of supernatural warmth and light came forth from the soul of Jesus and communicated themselves to Mary’s intellect and will. Mary could not take the credit to herself for the sublime effects they produced in her. Rather did she give praise on their account to Him who was their principle and end. As our Lord taught, ‘He that eateth me, the same also shall live by me; he who eats my flesh lives by me and for me, just as I live by my Father and for my Father.’ It is no small undertaking, and it is not for the weak of heart.

The dark night of faith is the spiritual apparatus with which to receive the Eucharist. It is the “consummate expression of the sacred… The mystery of the real presence of the historical individual who is Jesus Christ, in the midst of His Church, does not take away from the structure of the created or uncreated Being, but rather adds something to both.”

“That presence is, in fact, the highest expression of the divine power because it contains the great miracle of Transubstantiation, that is, of the persistence of the accidents of bread and wine without their metaphysical substance, and contains too the mystery of the simultaneous presence of the same body in many places.” The interior life of the non-ordained is only nourished superficially by touching with ones’own un-consecrated hands the Body of Our Lord. Mary touched Him at His birth, throughout His earthly life, and finally embraced His crucified Body. But she had a unique privilege of familiarity then. How must she have received Holy Communion from the Apostles?

There is a certain vulnerability necessary in receiving our Lord – kneeling down, head back, tongue out, like a child receiving its mothers’ milk. As the Introit for Low Sunday says: “As newborn infants, desire the rational milk without guile…” This “rational” milk is the milk for the soul. Catholics who can debase and dispose themselves to this degree are proportionately rewarded with a similar intimate vulnerability of Divine Love. 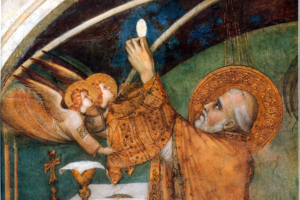 The Miraculous Mass (scene from the life of St. Martin), a fresco by Simone Martini in the Basilica of St. Francis, Assisi

The Eucharist is “the highest expression of God’s power in human creatures, who are enabled to perform the miracle of transubstantiation [i.e. the priest], who receive a pledge of their eschatological glorification, and who are strengthened in all their own moral energies.” The Holy Communion of the priest must be almost as special (private and intimate) as that of Our Lady. His “enclosure” at the altar, facing the tabernacle, far from excludes his flock in the Communion, but here again, takes them up” with himself. The Communion of the priest is efficacious for himself and others to the degree that he can focus only on the mysterious reality before him.

“The Eucharist is the highest expression of the divine wisdom because here God has established a marvelous way of communicating Himself sacramentally in the form of food, over and above his self-communication in creation, in the Incarnation, and through grace. Just as human nature exists without a person in the Incarnation, because that nature has been taken up into a divine Person, so in the Eucharist, the accidents continue to exist without their proper substance because they are sustained miraculously by the substance of Christ’s Body.” The Incarnation in the womb of the Immaculate, the communication of God in her soul by grace at her own conception, still cannot surpass the wonders of her own Holy Communions up until her own Dormition. One would be remiss in not recalling this fact in stirring up these same sentiments at the next opportunity to assist at Mass.

“Lastly, the Eucharist is the highest expression of divine love, because desiring to communicate Himself to his creature in every possible way, the Infinite Love that had already communicated itself in creation, in the Incarnation and through grace, now communicates itself in a new way, as man feeds on the body of Christ and in a mysterious manner takes on divinity. The eucharist adds too to man’s love because man is enabled to respond to God’s infinite Love with a love that runs through an infinity of space, to pour itself out and be dissolved in the Beloved.”