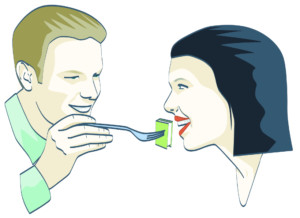 Since taking over this column in January 2014 from Friar Tuck, whose style was as expansive as his appetite(!), I’ve written about many Roman restaurants. Though all of Rome’s restaurants are now closed due to the virus, we are still hoping they will reopen soon, and we will once again enjoy the city’s food and each other’s company, which is what this exploration of Rome’s wondrous food is really all about.

Ristorante Spirito di Vino. This beautiful medieval house in Trastevere once belonged to the Jewish Italian lexicographer Nathan ben Jechiel (1035-1106). He turned to scholarship and religion after four of his five sons died before adulthood. (Yes, this world can be at times a vale of tears. Our faith allows us to hope for a better world to come, and the good things we do here often draw their inspiration from that hope.) The house’s basement, a cavernous wine cellar, counts 800 labels. It dates to 80 B.C.

Trastevere was Rome’s first Jewish quarter — St. Peter may have lived here — and over the centuries the house has been a synagogue, a convent, a foundry, a private home, and a warehouse before becoming a restaurant. Its chef/owner is Eliana Catalini, a devoted proponent of “Slow Food.” She was a researcher and lab technician to Nobel Prize winner Rita Montalcini Levi. Catalini’s motto is “fresh KM.0 products and ancient recipes.” A “KM.0” (zero kilometer) food is a fruit, vegetable, meat or drink raised near where it is eaten. These products can only be transported within a 100 km radius and there is no middle-man. The cost of traveling across oceans and continents disappears. Her famous dishes: chickpea crepes with codfish sauce, veal meatballs with ginger, artichoke clafoutis, and basil-scented ratatouille.

Caffetteria del Chiostro. With its large windows overlooking the Church of Santa Maria della Pace designed by Bramante (1444-1515), the cloister is the center of what originally was a monastery complex. Its menu is rigorously “homemade.” The Caffetteria also offers an interactive guide to the church and serves as a showroom for young artists.

Terrazza Borromini. Near Bramante’s cloister, on the top floor of Palazzo Doria Pamphili, designed by the Renaissance architect Borromini and home to Pope Innocent X (1644-55), Terrazza Borromini offers breathtaking views of Piazza Navona. It’s a unique venue for an apertivo. Below it is the study center Centro Pro Unione. Established in 1969, this library’s collection of 22,500 volumes and 400 periodicals spans the disciplines of ecumenism and the theologies of all Christian confessions. Hours: 9 AM-5 PM.

Caffè Colbert. Started in 2016 by four young entrepreneurs on the roof of the 16th-century Villa Medici, the Caffè overlooks the Villa’s magnificent gardens and the Spanish Steps. Once the Roman residence of the Florentine Medici family, the Villa Medici has been the French Academy for artists and scholars who win the Rome Prize since 1803. Among its famous borsisti (fellows) were Boucher, David, and Debussy. Besides the Caffè, the gardens are open to the public.

The French Academy, the oldest of all the many foreign academies in Rome, was established in 1666 by King Louis XIV. Before being transferred to the Villa Medici, it was housed near the Church of Sant’Onofrio on the Janiculum, then moved to the Palazzo Caffarelli, now part of the Capitoline Museums, in 1683; then to the Palazzo Capranica, now a cultural center, in 1684; and then to the Palazzo Mancini, now a bank, in 1725.

La Campana. Founded in 1518, this venue is Rome’s oldest restaurant(!). First a winery, then an inn, census records from 1526 show that a Pietro della Campana was the original owner, but its location on Vicolo della Campana probably gave the restaurant its name (and possibly the owner his surname, too). Today this home-style trattoria between the Pantheon and Piazza Navona is run by siblings Paolo and Marina Trancassini, members of the family who’ve managed it for more than 100 years(!). Not surprisingly, La Campana is known for its authentic cucina romana and was a favorite of Caravaggio, Picasso, Fellini, Guttoso, Anna Magnani, Alberto Sordi, Maria Callas and Pier Paolo Pasolini (1972-75), to name only a few of its illustrious habituées. Goethe even wrote about the place, referring to it as Osteria Campana in his Römische Elegien (Roman Elegies). Must-try dishes include tagliolini with anchovies and pecorino, puntarelle, and artichokes both alla romana and alla giudia. Buon appetito! 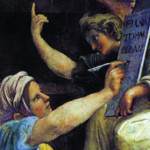 a section of Raphael’s fresco The Sybils

a view of Piazza Navona from La Terrazza 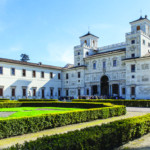 a view of Villa Medici