“I want the Catholic voice to be heard,” said the Pope Emeritus 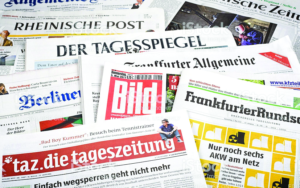 In what came as a surprise to many members of the Catholic elite in Germany, Pope Emeritus Benedict XVI has launched a foundation for Catholic journalism in his home country.

“I want the Catholic voice to be heard,” the retired Roman pontiff, who has resided in a Vatican monastery since his 2013 resignation, said of his decision.

Named after a weekly Catholic newspaper, the goal of the “Tagespost Foundation for Catholic Journalism” is to raise the equivalent of about $500,000 in 2020 to invest in training young journalists and to support a variety of projects, including research into issues of biomedical ethics, in Germany. Given that the country’s tax-rich dioceses and powerful bishops’ conference are already financing a wide array of media projects and news outlets that provide training, including a dedicated Catholic journalism school based in Munich, the initiative by the Pope Emeritus was recognized by both supporters and critics as a strategic move to bolster orthodox Catholic reporting independent of episcopal and other influences.

The “Society of Catholic Journalists” criticized the move, saying it raised concerns as to why the Pope Emeritus decided to undertake this initiative without involving the existing journalism school.

With a few notable exceptions — such as the German edition of Catholic News Agency, CNA Deutsch — the infrastructure of Catholic media and its representational bodies in Germany are deeply embedded in the overall structures and bodies of the Church there.

Given the Church tax system, the Kirchensteuer, and a number of historical arrangements, the Catholic Church, together with the Lutherans, is the second-largest employer in Germany after the state.

The Pope Emeritus’ decision to establish a foundation independent of this structure became public at a time where the very newspaper that carries the name of the new foundation was criticized by the president of the Central Committee of German Catholics.

Thomas Sternberg mentioned both the Tagespost and a private Austrian website as Catholic media in an interview in which he warned about nationalism and “hard-minded media.”

Speaking to CNA Deutsch, the CEO and editor-in-chief of the newspaper, Oliver Maksan, roundly rejected the criticism, decrying it as a political ploy and attempt to silence voices critical of the “Synodal Process” by labeling these as “right-wing.”