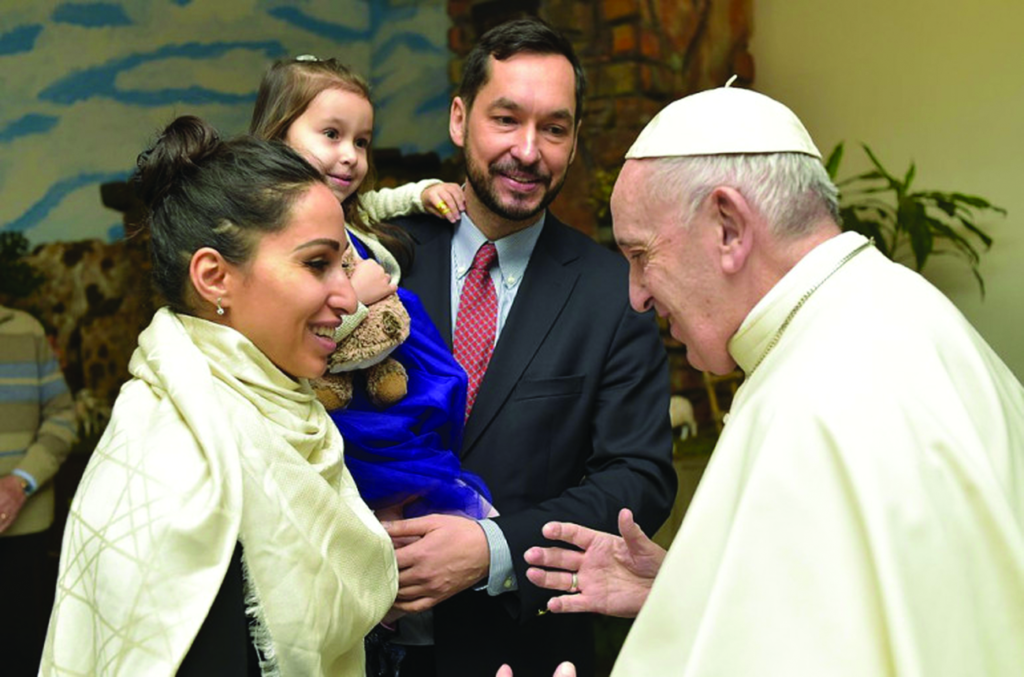 Pope Francis has bestowed the Order of Saint Sylvester upon Svetlana Kasyan, a Russian-Armenian opera singer. She thus became the world’s first woman to be honored with the pontifical award on May 2, 2019. Here she is with her husband, Leonid Sevastianov, and their daughter, Natalia. The photo was taken in Domus Santa Marta, the Pope’s residence, in July 2019

Russian opera singer and one of Inside the Vatican’s Top Ten people of 2019 Svetlana Kasyan was discharged in April from a Moscow clinic, where she spent about two weeks battling a coronavirus infection. “The virus was defeated, but pneumonia remains. Now we will continue to be treated at home. We are prescribed two weeks of compulsory quarantine,” Leonid Sevastianov, the singer’s spouse, head of the World Old Believers Union, who was also hospitalized with a similar diagnosis, told Interfax (interfax.ru) on April 8.

Kasyan could have become infected in one of the Old Believer churches of Moscow after talking with parishioners, one of whom was infected with the coronavirus. According to Sevastianov, the disease was quite difficult; they had to take strong drugs that treat malaria, which caused hallucinations; however, mechanical ventilation was not required.

After the quarantine, Kasyan planned to return to performances, including a charity concert, either in the Moscow Catholic Cathedral of the Immaculate Conception or in the Lutheran Cathedral of Peter and Paul. The singer would like to perform opera arias to the accompaniment of the organ. “The concert will be given in honor of the doctors who are fighting the epidemic today. We will organize donations and fundraising online. The proceeds will go to doctors who do their duty, despite low salaries and sometimes lack of technical equipment,” the source said.

Pope Francis called Svetlana Kasyan his favorite singer, repeatedly received her with her husband in Rome and even promised to visit her Moscow apartment. The Pope elevated the singer to the dignity of a Lady of the Order of St. Sylvester and gave her fragments of the Shroud of Turin. (Credo) 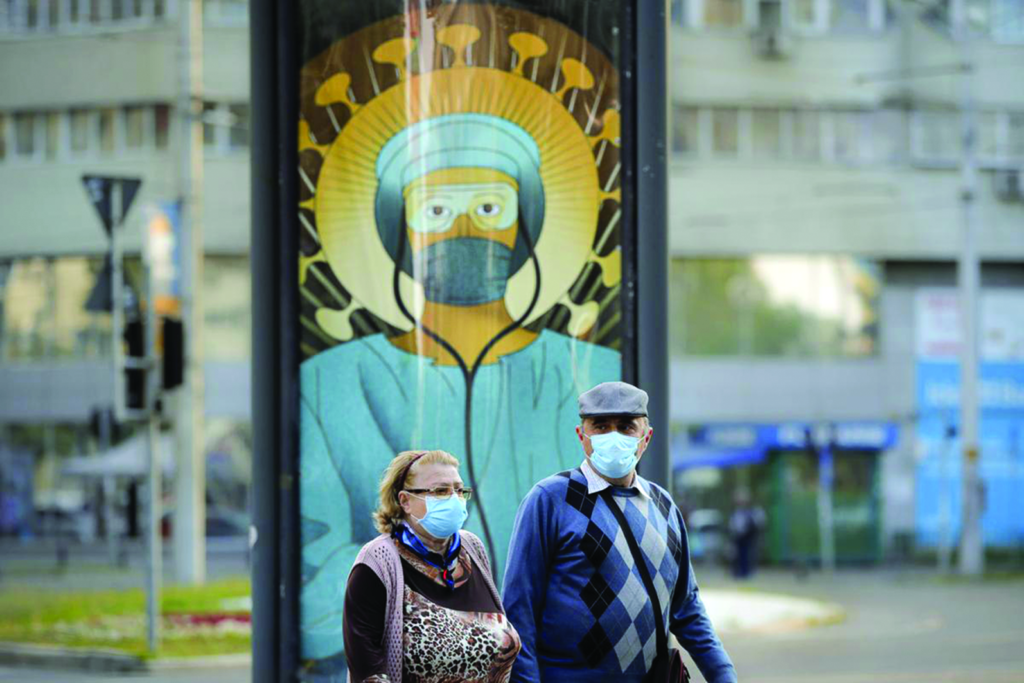 Romania’s Orthodox Church on April 29 criticized a billboard campaign showing doctors dealing with the coronavirus epidemic as saints with halos shaped like the virus.

According to a Church spokesman, the “blasphemous” campaign created by international advertising agency McCann Worldgroup in conjunction with local artist Wanda Hutira is “a visual abuse of Christian iconography.”

The campaign is “marked by bad taste fed by ignorance and a hideous ideology that only knows how to caricaturize Christianity,” said spokesman Vasile Banescu.

The posters, which could be seen this spring in Bucharest, the Romanian capital, were also offensive to doctors who “do not think of themselves as saints … and do not ask for public worship,” Banescu said, claiming that the campaign promotes “a dystopian vision of the situation caused by the pandemic.”

In response to the criticism, Bucharest officials said they would ask the posters to be taken down.

While the Catholic Church in Romania did not take an official position on the campaign, Serban Tarciziu, spokesman for the Archdiocese of Bucharest, told local media that he appreciated “the attempt to illustrate a beautiful idea in the visual style” of some religions. (Click on Detroit)

Holy Fire has descended in Church of Holy Sepulcher in Jerusalem 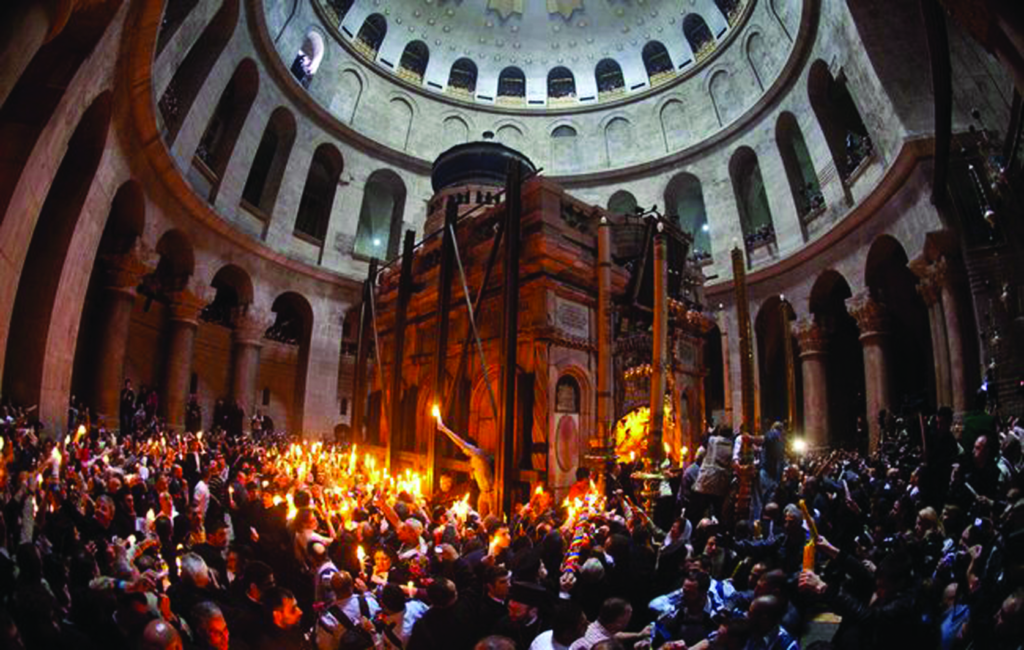 The Holy Fire once again descended in the Church of the Holy Sepulchre in Jerusalem, as seen on the live stream on the Facebook page of the Jerusalem Patriarchate.

His Beatitude Patriarch Theophilos III of Jerusalem entered the church a little after 1:00 PM (6:00 AM Eastern), and after vesting and processing thrice around the Lord’s Tomb, he entered the Tomb itself at 1:45 PM (6:45 AM).

Normally, after the Fire’s descent the Patriarch passes the holy gift to the faithful, though the ceremony was celebrated without parishioners and pilgrims this year due to the coronavirus pandemic.

The descent of the Fire was preceded by a complex ceremony: The doors of the Sepulchre were sealed with a large wax seal as a sign that its inspection had finished, and in it was found nothing that would allow the Patriarch of Jerusalem to light the fire by any ordinary means.

Shortly before the arrival of Patriarch Theophilos, the seal was removed from the door of the edicule, and a large lampada and thirty-three candles were carried into the tomb. Then the Patriarch entered and began to wait. Those present continually prayed for the granting of the Fire until the time of its appearing.

The Holy Fire is delivered to various Local Orthodox Churches around the world. This year, according to a new decision between the Romanian Orthodox Church and the Romanian Ministry of Internal Affairs, the Orthodox faithful were to be able to receive the Holy Fire at home, as a form of Paschal joy and consolation during this time of quarantine.

Parish employees and volunteers were responsible for maintaining proper sanitary measures during the distribution. Ministerial employees were also to distribute the Holy Fire to hospitals and quarantine centers. 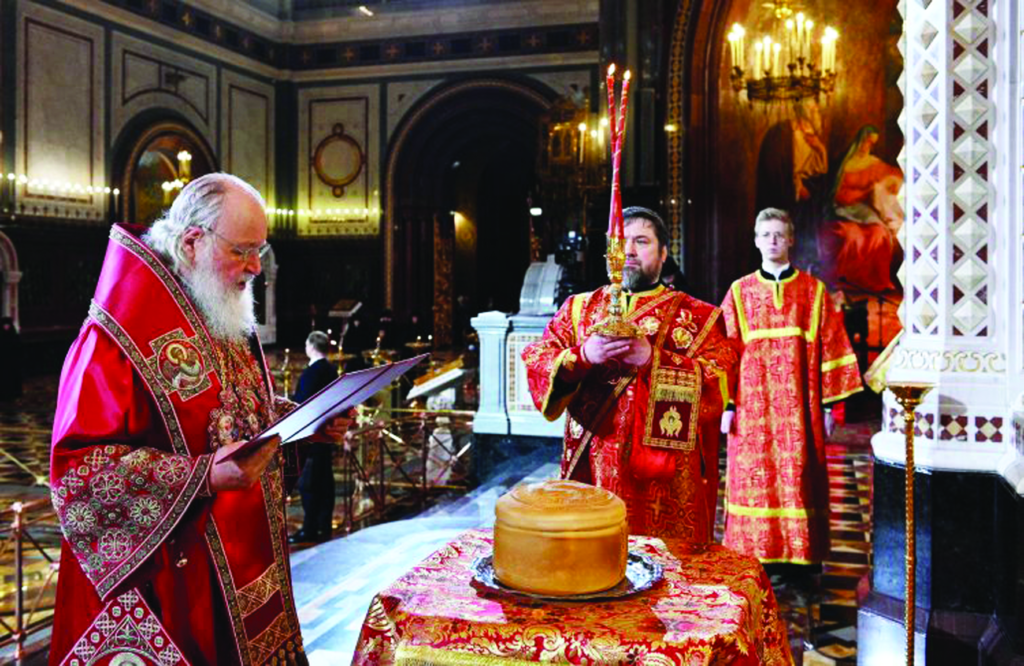 Easter 2020 in Russia: “Orthodox Easter behind closed doors in response to the appeal of Patriarch Kirill”

His Holiness Patriarch Kirill of Moscow and All Russian has sent Easter greetings to heads of nonOrthodox churches. Among the addressees are Patriarch Tawadros II of the Coptic Church, Pope Francis of Rome, Patriarch Mor Ignatius Aphrem II of the Syrian Jacobite Church, Supreme Patriarch and Catholicos Karekin II of All Armenians, Catholicos Aram I of Cilicia, Catholicos-Patriarch Mar Gewargis II Sliva of the Assyrian Church of the East; Maronite Patriarchate Bechara Boutros Cardinal al-Rahi; Metropolitan Baselios Mar Thomas Paulose II of Malankara, Patriarch Abune Mathias of Ethiopia, and others.

The message states: I cordially salute you on the Radiant Easter of the Lord and address to you the life-asserting greeting:

Today the great feast of feasts has come, according to St. John Chrysostom, the banquet of faith and the richness of goodness. The rising of the Saviour from the dead has destroyed the stronghold of hell and dissipated the darkness of sin. Let us rejoice on this wonderful day, for through the resurrection the human race has been granted eternal life in Christ Jesus our Lord (Rom. 6:23).

Sharing the joy of the feast with those who are near and who are far, let us join efforts to assert in society the unchanging moral values, help those who suffer from injustice, who are persecuted or endangered by the spreading coronavirus infection.

I wish you spiritual and physical strength and God’s help in fulfilling your lofty ministry, and to your flock, I wish peace and welfare.

+ Kirill Patriarch of Moscow and All Russia (mospat.ru) 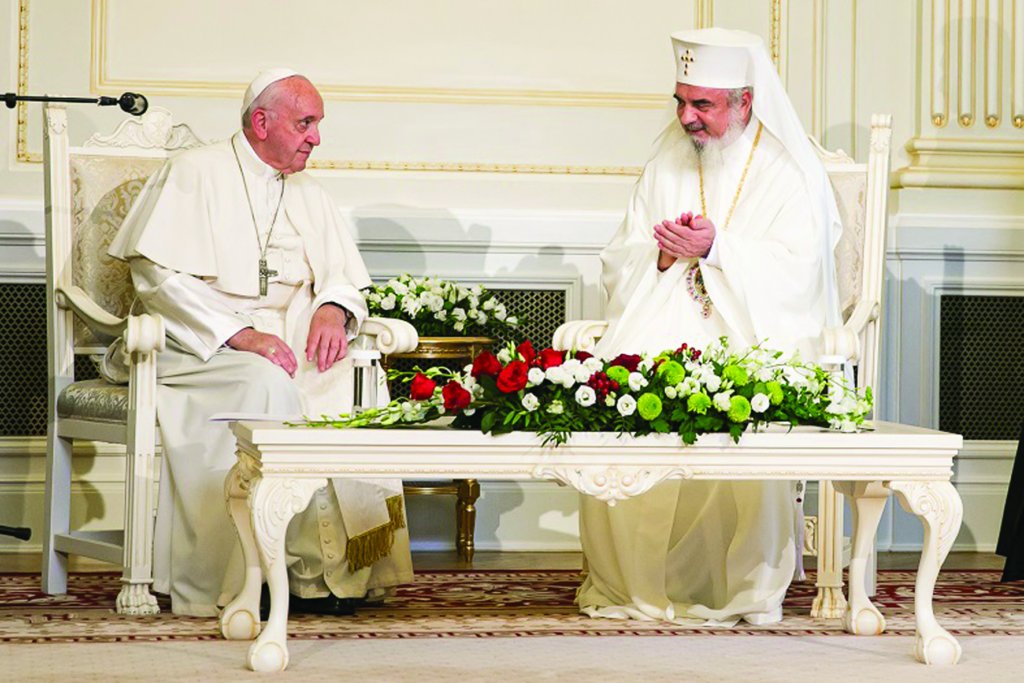 Daniel thanked Pope Francis in a letter sent on April 23 for the medical equipment donated to the St John the New Hospital in Suceava.

Suceava county has been the hardest-hit in Romania by the new coronavirus pandemic, which is why it has also been referred to as Romania’s Lombardy.

Suceava county has recorded almost a quarter of all COVID-19 cases confirmed in Romania and the highest number of victims. (Basilica.ro)

Intricate mosaics depicting Russian President Vladimir Putin and other high-ranking officials will not be put on display in a new Russian Orthodox military church, officials confirmed May 1. The grandiose wall decorations faced objections from the Kremlin.

Another mosaic of former Soviet leader Josef Stalin has also been met with criticism but has yet to be officially removed from the church.

An image of the mosaic, which showed Putin alongside Defense Minister Sergei Shoigu and Foreign Minister Sergei Lavrov, was first made public in Russian media in late April. While the Kremlin has not publicly commented on the mosaic, the decision to remove it apparently came from Putin himself.

The church is to mark 75 years since the Soviet victory in World War Two.

Its entrance steps are forged from melted-down hardware seized from Nazi troops.

The new church was supposed to be unveiled on the May 9 anniversary of the victory, but the coronavirus epidemic put all Russia’s Victory Day plans on hold, as critics around the world questioned the wisdom of connecting the Orthodox Church so closely with the military.