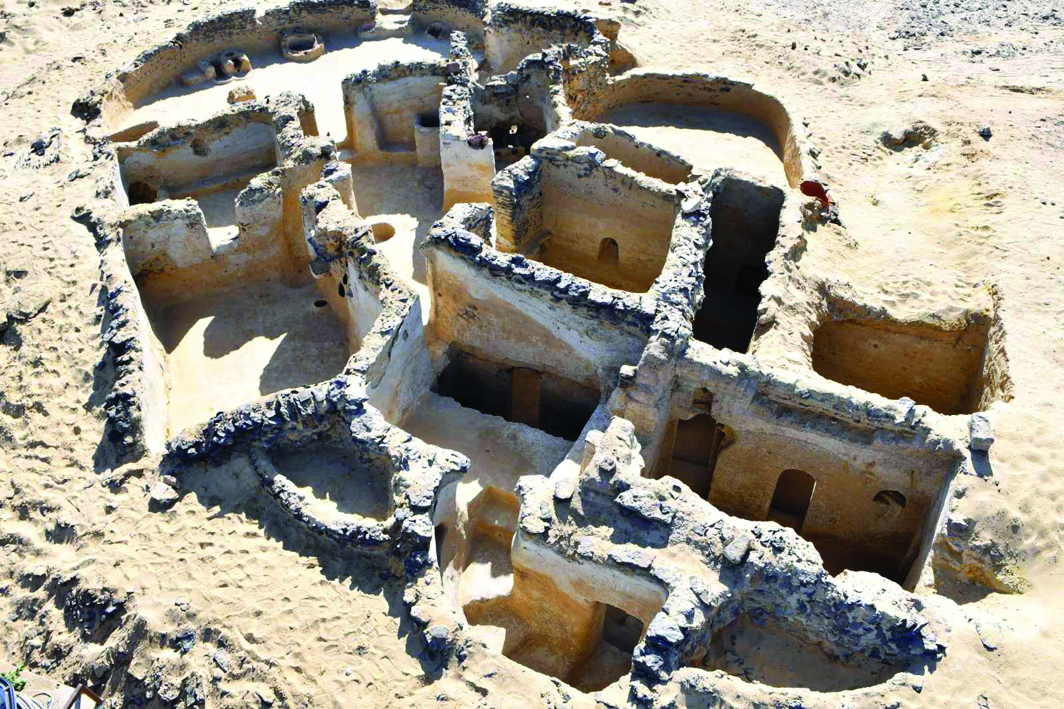 A French-Norwegian team led by Romanian archaeologist Victor Ghica discovered the oldest archaeologically attested monastic site in the world. The site is 370 kilometers south-west of Cairo, Egypt, and it dates back to the 4th century.

The discovery made at Tall Ğanūb Qaṣr al-‘Ağūz, in the al-Bahariya oasis, certifies that Christian monasticism was born in the Egyptian Desert, as the Tradition of the Church has always taught.

The archaeologists discovered “six sectors constructed predominantly of basalt blocks and mud” and “a number of buildings which are dug partially, or completely, in the bed-rock,” including “clusters of living spaces for monks.”

Four of the six buildings complexes that compose the site were found in an exceptional state of preservation, with all the walls intact. The walls of four of the rooms, including the walls of one of the churches, are completely covered with religious texts written in Greek, including a passage from Evagrius and another one from St. Ephraim the Syrian’s Sermo asceticus.

Prof. Ghica, who coordinated the project, declared that “the dig reveals a new face of the beginnings of organised Egyptian monasticism.” The Roumanian professor said the discovery brings new information on “the nature of monastic life in the region.”

Based on stratigraphy, radiocarbon analysis, ceramic and glass assemblages and two coins, the foundation date of the sector can be situated in the mid-fourth, or even in the first half of the fourth century, making it the oldest preserved Christian monastic site that has been dated with certainty.

According to the Romanian, the recently discovered site adds to the “19 structures and a church carved into the bedrock” discovered in 2020 in this region inhabited by the first Christian monks between the 4th and the 8th century.

Ghica is a professor at the MF Norwegian School of Theology, Religion and Society in Oslo and a graduate of Bucharest University.

He specializes, among other, in Late antique archaeology, Coptic and Ancient North Arabian Epigraphy, and in Copto-Arabic and Syriac literature. (Basilica.ro)

In the inter-council period, 3 metropolias were established, and now their number has reached 60.

The work to improve the statistics, collected in Russian dioceses, has come to embrace other countries in the canonical territory as well as dioceses and parishes abroad, Patriarch Kirill pointed out. In particular, corrections were made in some dioceses, which earlier did not distinguish between staff clergy and clergy not on the staff list. This scrupulous work continues.

At present the staff clergy of the Russian Orthodox Church consists of 39,414 clergy including 34,774 staff presbyters and 4,640 deacons.

For the year, the staff clergy increased by 521 clerics. This indicator of the growing number of clergy has been steady in recent years. As for the total number of staff and non-staff clergy, it amounts to over 40,000 clerics (as of the beginning of 2017, since the statistics on the number of clergy and churches is summarized in the first months of each year).

In the far-abroad countries there are over 900 parishes and monasteries of the Russian Orthodox Church including the parishes of the Russian Church Outside Russia. “Almost every community of the Moscow Patriarchate in the far-abroad countries has a Sunday school, catechetical courses and activities for preserving the native language and culture and for educating the younger generation,” Patriarch Kirill said.

Among the important events for the far-abroad parishes, Patriarch Kirill mentioned the consecration of the new cathedral of the diocese of Chersonese in Paris in 2016 and of the cathedral in London after its capital restoration. (Mospat.ru)

Prince Phillip: “Baptized Orthodox and that is all that really counts” 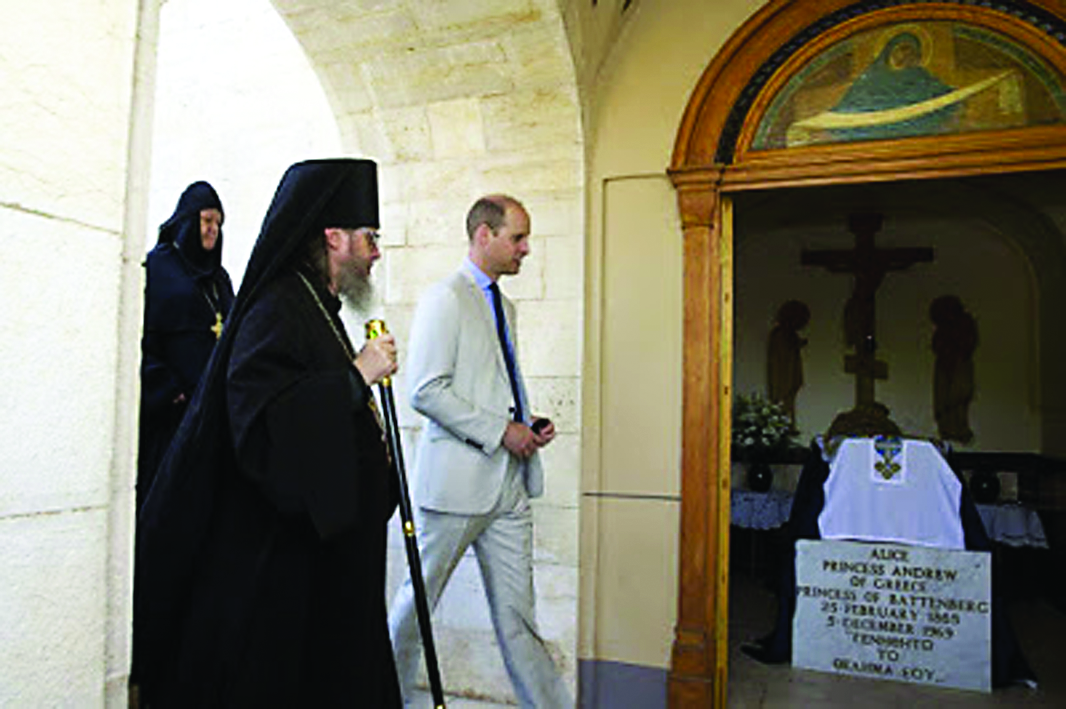 HRH Prince William paying his respects to his great grandmother, HRH Princess Alice of Greece, at her tomb on the Mount of Olives, Israel. 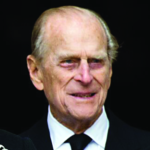 Prince Philip, the recently deceased Duke of Edinburgh and husband of Queen Elizabeth of England, was born on the island of Corfu on June 10, 1921, the only son and fifth child of Prince Andrew of Greece and Princess Alice of Battenberg. He was baptized into the Greek Orthodox Church.

When in 1948 HRH Princess Elizabeth, the present Queen, married the Greek Orthodox Prince Philip, the present Duke of Edinburgh, he was officially required to cease to be Orthodox (although he never ceased to make the Orthodox sign of the cross in public).

His mother’s aunt, Elizabeth, married into the Russian royal family and after dying during the Revolution, she was considered a saint by the Russian Orthodox Church.

When Germany invaded Greece in the Second World War, Princess Alice, who was always deeply religious, risked her life to help Greek Jews. Her name is listed among the “Righteous Gentiles,” those recognized by the Israeli government as heroic in helping Jews escape annihilation.

She became an Orthodox nun, and when the Greek royal family was expelled from Athens in the military coup of 1967, Prince Philip brought her to London where she moved into Buckingham Palace and created a private chapel for herself which was hastily dismantled following her death in 1969. She can be seen dressed as an Orthodox nun on the balcony of Buckingham Palace in photographs on various public occasions in the 1950s.

At the time of her death, a dispute arose because of the religious problems of burying the Greek Orthodox princess with her aunt, the Grand Duchess Elizabeth, in a Russian Orthodox church in Jerusalem.

A compromise was struck: Princess George of Hanover, who at the time was 73 years old and Prince Philip’s eldest sister, flew in with the coffin at the head of a royal delegation.

After many years of not practicing his faith, HRH Prince Philip returned to Orthodoxy in the early 1990s. In an article of that time written by Giles Milton (The Spectator, March 14, 1992), it was revealed that in May, 1991 he had spoken in private to a Russian Orthodox bishop in London and for June, 1993 he was planning a meeting with the Patriarch of Constantinople, a visit to the Holy Mountain of Athos in Northern Greece and a visit to the Patriarch of Moscow. In the same article, the Prince’s words to an Orthodox Conference on Ecology in Crete in November 1991 were also quoted.

“The strong relationship between Prince Philip and the Orthodox Church seems to be a meeting of like minds. We all had a very interesting discussion in Crete as to whether Prince Philip was still Orthodox or not,” says Palmer. “The monks said his conversion to Anglicanism 49 years ago didn’t matter because he was baptized Orthodox and that is all that really counts.” (Greek City Reporter)