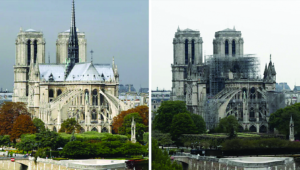 Notre Dame Cathedral before and after the fire on April 15, 2019

For the first time since 1803, Notre-Dame de Paris did not have a Christmas Mass, and eight months after the fire on April 15, 2019, a giant crane watches over the cathedral while waiting to dismantle the scaffolding which threatens it.

This crane will have to carry out the most delicate operation of this entire Herculean security project an operation which should start at the beginning of February: it will be a question of dismantling one by one 10,000 metal tubes — 250 tons in total — which the fire of April 15 welded.

It is a work of several months which requires preparations because of its complexity. The deformed, weakened scaffolding, like a gigantic web in the sky, threatens the vault and the balance of the cathedral. The gem of Gothic art is still, seven months after the fire, in a state of “absolute emergency.”

In accordance with President Emmanuel Macron’s wish to complete the restoration of Notre-Dame in five years, there was no stopping at the end-of-year holidays: some operations continued even if others are interrupted, according to the public project headed by General Jean-Louis Georgelin.

The giant crane arrived on December 16 in parts aboard an exceptional convoy accompanied by 40 trucks of equipment. Two mobile cranes unloaded them.

It is currently being assembled and will culminate at 75 meters(80 meters with the arrow which dominates it).

Made expressly in Moulins, the largest “topless” tower crane in Europe, it can lift up to 8 tons.

During the night of December 17 to 18, the essential electrical transformer station was unloaded from a barge, which will provide permanent power to the installations. Two-thirds of the scaffolding is surrounded by metal beams. Two levels have been surrounded. There remains the belt of the upper level. It will be carried out in January thanks to the crane. At the same time, a second light scaffolding is being erected on either side of the old one. This structure will be higher, and, from beams fitted with rails, rope access technicians will descend into the scaffolding in order to cut it out. The dismantling, which will last several months, could start in February.

General Georgelin attended a screening of an animated film on the history of Notre-Dame. In front of the gathered companions, patrons, architects, the general announced that a Te Deum will be sung in Notre-Dame on April 16, 2024, exactly five years after the fire.