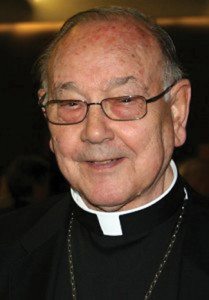 The secular media is abuzz with the comment from Archbishop Fernando Sebastián Aguilar, recently named a cardinal-elect by Pope Francis, that homosexuality is a mental disorder that can be treated.

Sebastián told the Spanish newspaper Diario Sur in January that “homosexuality is a defective manner of expressing sexuality, because [sex] has a structure and a purpose, which is procreation.”

“A homosexual who can’t achieve procreation is failing,” he said. “Our bodies have many defects. I have high blood pressure, a defect I have to try and correct in whatever way I can. To say that homosexuality is a defect is not an insult. It helps because in many cases of homosexuality it is possible to recover and become normal with the right treatment.”

The comments have aroused the ire of both the homosexualist lobby and their supporters in politics and the mainstream secular media. The Spanish homosexualist lobby group Colegas accused Sebastián of “homophobia” saying that homosexuality is not a “curable illness.” Maria Gamez, spokesman for Spain’s left-wing PSOE Party, said, “These are not the winds of change that appear to be blowing from the Vatican. Pope Francis seemed to have distanced himself from these retrograde, insulting and anti-constitutional theses. He should be asking himself whether a cardinal like this is helping the regeneration he defends.”

But for a Catholic Churchman to assert that homosexuality is a disorder is unsurprising, since this is precisely the assessment of The Catechism of the Catholic Church, the official compendium of Catholic moral doctrine. At paragraph 2357, the Catechism says that the “psychological genesis” of homosexuality, “remains largely unexplained.” Nevertheless, it continues, “homosexual acts” are “acts of grave depravity.”

“Tradition has always declared that homosexual acts are intrinsically disordered,” the Catechism states. “They are contrary to the natural law. They close the sexual act to the gift of life. They do not proceed from a genuine affective and sexual complementarity. Under no circumstances can they be approved.”

The Catechism also says that all people are called to practice the virtue of chastity as it is applicable to their particular state in life. “Chastity includes an apprenticeship in self-mastery which is a training in human freedom. The alternative is clear: either man governs his passions and finds peace, or he lets himself be dominated by them and becomes unhappy.”

Archbishop Sebastián, at 84, is the second-oldest of the men listed for this year’s consistory that raises prelates to the highest office in the Catholic Church, under the Pope himself, and confers the status of “Prince of the Church” and advisor to the Pope. The cardinal-elect resigned as bishop of Pamplona, Spain in 2007 and now lives in Malaga in Costa del Sol. He has served as a professor of theology since the 1960s, and was rector of the Pontifical University of Salamanca in 1971.

The UK’s Daily Mail commented that his remarks were “in direct contrast to Pope Francis’s recent assertion that the Catholic Church should not marginalize gay people.”

Pope Francis was named Person of the Year 2013 by the American homosexualist magazine The Advocate after he said to a group of reporters on the plane home from World Youth Day last year, “If someone is gay and seeks the Lord with good will, who am I to judge?” But Sebastián contested this widely-disseminated interpretation, saying that Pope Francis’ message had been manipulated by the secular media.

“The Pope is very respectful and holds all people in high esteem, but doesn’t betray or change the traditional teaching of the Church,” said the archbishop. “It’s one thing to be compassionate towards a homosexual person and another thing to morally justify the practice of homosexuality. All he is doing is offering comprehension and compassion and showing a desire to welcome those who have gone astray.”

In the same interview, Sebastián said he was concerned that abortion had become “normal” in Spanish society.