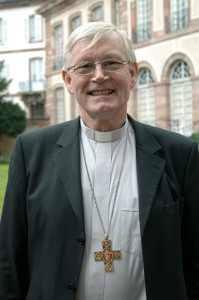 “I wanted to be a priest like our parish priest. It wasn’t until I was 23 years old, after I’d graduated from seminary in Nancy, that I decided to become a Franciscan…”

You were born in 1941. Do you have any memories of the Second World War?

Archbishop Jean-Pierre Grallet: My first memory dates from 1944. My whole family took refuge in a bomb shelter in the cellar of our house because British planes were bombing the Germans. Since I was a small child, I didn’t understand what was going on. I wasn’t afraid. I felt safe under my parents’ protection.

My next memory is of a celebration in our village — tiny Rozelieures, near Lunéville in Lorraine — for our liberation from the German occupation. There was a huge bonfire. It was the very first celebration I remember. All us villagers joined together one eve­ning to light “a fire of joy.”

After the war, German prisoners-of-war came to work on our local farms. It was very sad for them, but at the same time it was lovely because, even if they had to work on our farms, they became family friends. Several worked on our farm with my father for two or three years. I called them by name and they were nice to me. That’s when I first began to fraternize with others less fortunate than I.

How old were you when you first felt your vocation?

Grallet: Because of St. Francis. My professor assigned me St. Francis as the subject of a paper. At the end of my research I was so deeply moved, overwhelmed, transformed that I said to myself: “I want to live with him and like him. I want to follow his example.” Of course, he’s my favorite saint. He’s helped me a lot.

How did you parents react to your vocation?

Grallet: My parents were very happy, but my mother would have preferred that I become a diocesan priest because parents can live in the rectory whereas, as a Franciscan, my new family was my community. However, even during their first visit, my fellow brothers treated my parents as their parents too, so my mother was reassured.

It seems to many that Pope Francis is more like a Franciscan than a Jesuit. What do you think?

Grallet: I think he’s first and foremost a Jesuit. Secondly, he made a very politically clever decision in choosing the name Francis. He knew that the Church needed reforms and that St. Francis had reformed the Church of his era through charity, simplicity, and fraternity, and by loving the poor. The Holy Father has the discernment of

St. Ignatius, of the Jesuits, and the brotherly warmth of the Franciscans. Speaking for myself, after I became a Franciscan, I made two pilgrimages to Loyola, the birthplace St. Ignatius. There I discovered that Jesuit and Franciscan spirituality complement each other: the discernment of St. Ignatius and the Franciscan fraternal fervor.

Did you have a mentor?

Grallet: I’ve always had at every stage of my life, an older “spiritual father,” an advisor and confessor. First, my parish priest, then my professors, then among my fellow Franciscans. Although now others often choose me as their mentor, I still look to other wise men for advice. Before I accepted my bishopric, I called on my elderly friend Monsignor Lucien Daloz, bishop of Besançon. I asked him whether I should accept or not. He answered: “Jean-Pierre, have you given your life to God and to others?” “Yes,” I replied enthusiastically. “So, Jean-Pierre,” he said, “continue.”

Have you ever seriously doubted your vocation?

Grallet: I have never doubted my faith in God. That always came naturally to me thanks to my parents, my upbringing, my prayers. The few doubts I’ve had concerned me. I always wanted to give my life to God, but sometimes doubted whether I’d be capable. My mother was very generous and joyful and my father very upright and hardworking. This combination of their good qualities has helped me enormously.

How often have you been to Assisi?

Grallet: About 15 times. Before becoming responsible for Franciscan continuing education from 2002 to 2004 and then auxiliary bishop in 2004, I was a university chaplain at Besançon, Strasbourg, and Metz. I guided many student groups to Assisi. It’s a town where you live the Gospels. St. Francis and his followers followed a lifestyle like that of Jesus and his disciples in Galilee. 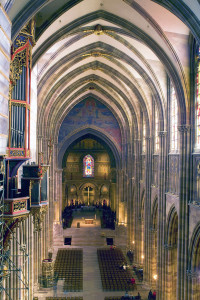 The nave of the Cathedral of Our Lady of Strasbourg. It is widely considered to be among the finest examples of high, or late, Gothic architecture.

Do you have favorite spiritual places?

Grallet: In Strasbourg, it’s our very beautiful and majestic cathedral. It’s the second most visited cathedral in France after Notre Dame. I also love the hermitages of Assisi and the very modern church designed by Le Corbusier at Ronchamp.

A few years ago, I asked His Eminence Donald Wuerl, the archbishop of Washington, D.C., about the role of a bishop. He answered: “The role of a priest, and therefore of a bishop, has always been threefold: to teach, to lead, and to sanctify. However, at different times in history there’s perhaps more need to emphasize one or another of these three responsibilities. I believe this is a period of time in the life of the Church when teaching is the priority.” You have been a teacher all your life. Do you agree with Wuerl?

Grallet: We need a balance of all three roles. We must declare, catechize, and transmit our faith. It’s our duty. We need to dialogue, but we especially need to give answers. We need to pray together, celebrate with other Christians. Traditionally the Church has three duties: announce Jesus Christ, celebrate Jesus Christ — that is, saying Mass and praying — and serve our brothers who are poor and sick, that is, charity. I think faith and charity are always essential. Where there’s faith and charity, there’s hope.

The archbishop of Alsace is chosen differently than other archbishops. Can you please explain?

Grallet: In the traditional way, the Pope receives priests’ proposals through the country’s papal nuncio; then the Pope asks the advice of the bishops and they decide on the choice. It’s the same procedure for choosing the archbishop of Strasbourg except that the French government confirms the Pope’s choice or can express reservations. It’s always the Pope who chooses, but in the case of the archbishops of Strasbourg and of Metz the French government must accept the Pope’s choice. When in 1905 France abolished a state religion, Alsace was German; and, after 1918, when Alsace became French again, the Alsatians asked the French government to let them keep certain German local social laws and the German concordat. Thus, in Alsace there’s a strong tradition of helping the needy. This also means that Catholic priests, Protestant ministers, and rabbis receive a state salary and that we have the moral duty to share, to take care of our poor, sick, elderly, and handicapped. I remind my priests of this duty especially since I’m Franciscan.

Strasbourg is the capital of Europe. What is the religious make-up of its population?

Fewer and fewer Europeans attend Mass weekly. How does Church attendance in Alsace compare with the rest of France?

Grallet: Maybe between 8 and 15%. It’s slightly more than in the rest of France.

What about vocations? Can you give me some statistics for, say, the last five years?

Grallet: I continue to ordain a few priests every year, but France is going through a very bad time with regard to vocations. Nowadays there are very few priests and very few ordinations. In Strasbourg we have some 18 seminarians altogether for all six years of study, so that’s not many. When I studied we were 20 during our first year, but only five were ordained. We have all remained in France and in contact. Now in their first year there are only three seminarians so you see in 50 years the number has decreased by almost 90%. Except for one foreigner, all the seminarians in Alsace are Alsatian.

What has been your greatest challenge over the years?

Grallet: My greatest challenge is to abolish materialism and egoism. Materialism prevents people from searching for God and believing in Him, and egoism prevents people from searching for their brother. There’s a double difficulty; materialism leaves less room, less love for God and his teachings; egoism leaves less room for loving one’s brother. We must encourage prayer and fraternal love. We need both. Many Christians are specialists in prayer or specialists in fraternal love, but much too seldom specialists in both.

I must tell you something. On Saturday I prepare my sermon for Sunday and I also visit my parishioners and bring a notebook with me to make notes. In the evening, when I write my sermon, I have my Bible and my notebook on my desk. My sermon is always based on the Word of God and the confidences that my parishioners have confessed to me that day. A meeting point between God’s Word and my parishioners’ life stories!

What do you consider the Church’s greatest challenge in the near future?

Grallet: The Church must become simpler in all senses of the word; it must get closer to people. Pope Francis will show us the way. We Christians must be understood as the ones who love their brothers, who help their brothers. Our great liturgies are only beautiful if we believe them with love in our hearts. We must return to what is essential, to the simplicity of what is essential. God will judge us. He will ask us, ask me: “Jean-Pierre, did you believe? Did you love? Did you help others?” That’s all; that’s the essential. You must give your life, as my friend and advisor Monsignor Daloz told me.