They were born in the same city, though in different areas. Pope Francis was born in the beautiful neighborhood of Flores, inhabited by descendants of Italian and Spanish immigrants. They are six years apart: Jorge Bergoglio was born in 1936, Marcelo Sánchez Sorondo in 1942. Both became priests: the former entered the Society of Jesus; the latter became a diocesan priest in his hometown in 1968. Their paths parted: Father Bergoglio stayed in Argentina, Reverend Sánchez left for Rome to continue his studies. There he studied a great deal: first he graduated in theology from the Pontifical University of St. Thomas Aquinas, then in philosophy from the University of Perugia in 1976. Then, for more than 20 years he was professor of the history of philosophy at the Pontifical Lateran University and then at LUMSA University. 1998 marked a turning point in his life: John Paul II appointed him chancellor of the Pontifical Academy of Sciences, a post which he still holds.

Professor Sánchez has witnessed extraordinary and epoch- making events in Rome. He resided at the German Hungarian College in Via della Pace in Rome when, after John Paul I’s premature death, the Archbishop of Krakow was elected bishop of Rome in 1978, the first foreign Pope in the Church’s recent history; the election of Cardinal Joseph Ratzinger in 2005, another foreigner who ascended the throne of Peter; and Benedict’s resignation after a highly eventful pontificate which lasted eight years.

When the conclave opened on March 12, 2013, Sánchez Sorondo did not expect another unimaginable event: the election of the first non-European Pope, an Argentine, a fellow countryman of his. Then he realized that the Holy Spirit goes far beyond the imagination, calculations and predictions of men. 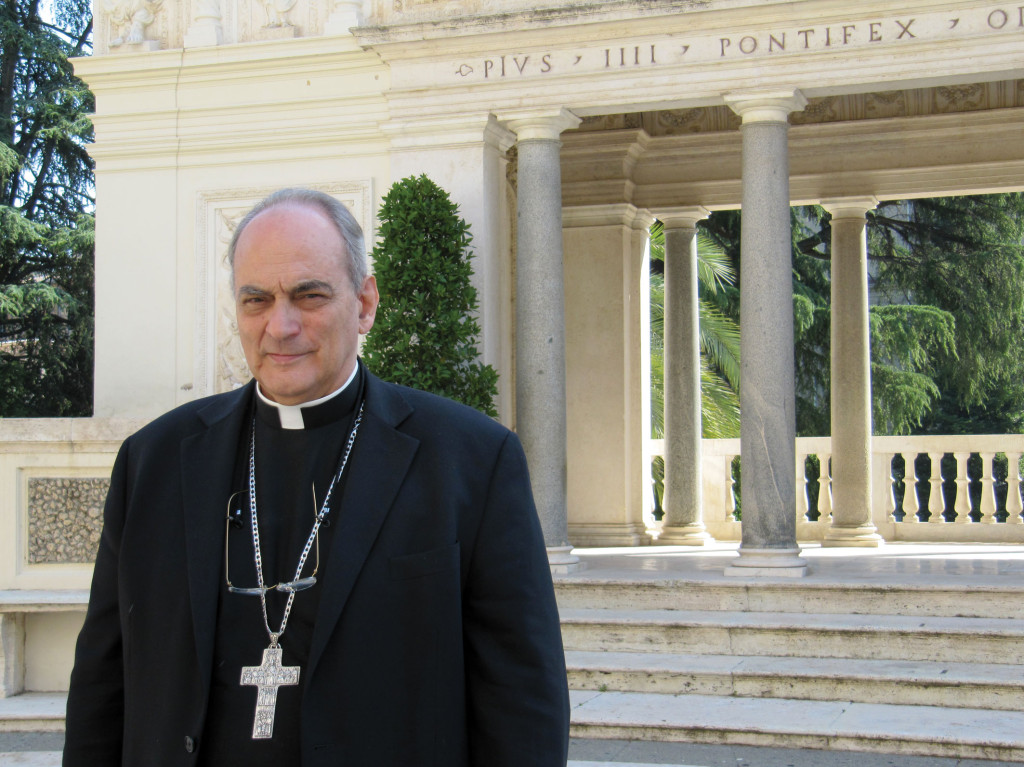 You are a fellow countryman of Pope Francis. When did you meet Jorge Mario Bergoglio?

Bishop Marcelo Sánchez Sorondo: We were born in the same city, but not in the same area. We have known each other for a long time. We worked together at the Aparecida Latin American Episcopal Conference for almost a month, and here in the Vatican I collaborated with him on the beatification process of the Argentine Antonia de la Paz y Figueroa.

Was it reasonable to expect a Latin American cardinal, the Archbishop of Buenos Aires, to be elected Pope?

Sánchez Sorondo: Latin America is the world’s most Catholic continent and so the election of a Latin American cardinal did not come as a surprise. But why did the cardinals choose the Archbishop of Buenos Aires? Cardinal Bergoglio was well known in Latin America. I think he gained international visibility from the 2001 Bishops’ Synod of Rome, which dealt with the role of bishops. He was appointed general rapporteur in place of the bishop of New York who had to return to the US after the September 11th terrorist attack on the Twin Towers. It’s not a secret that Cardinal Bergoglio was among the hopefuls in the conclave that elected Joseph Ratzinger. Also, the short speech which he delivered during the general congregations before the conclave made a dramatic impact. On that occasion the cardinal spoke about the need for the Church to “come out from itself” in order to evangelize the “peripheries, not only geographical, but existential” with a missionary spirit and wondered to what extent the evils that, in the passing of time, afflicted the ecclesiastical institutions had roots in self-referentiality, in a sort of theological narcissism, a “spiritual worldliness” which increases mutual praise. In my opinion it was these words that touched the cardinal electors deeply. Anyway, I think that the election of a Latin American Pope was a great dream come true.

What is the meaning for the Church of having a non-European Pope for the first time in its history? Does this mean that the Church’s “Eurocentrism” is coming to an end?

Sánchez Sorondo: Christianity, with its monasteries, its pilgrimages, its great religious orders, its theology, its cathedrals and philosophy, developed in Europe. All this created a close link between Christianity and the Western world. Yet those coming from “the end of the world” like Cardinal Bergoglio, though recognizing this fact, have a more multipolar vision of Christianity. Pope Francis does not restrict his pastoral action to Europe, but takes into account the need to evangelize areas of the world where Christians are a minority and live in contexts other than the Western world.

In the spirit of the great Jesuit missionaries…

Sánchez Sorondo: Let us remember that Pope Francis entered the Society of Jesus because he wanted to become a missionary. He recently said to the students of the Jesuit Schools of Italy and Albania: “When I was studying philosophy I wrote to Father Arrupe asking him to send me to Japan, but he answered me: ‘Your lung disease doesn’t make you suitable for such demanding work.’”

So he stayed in Buenos Aires. Then I like to imagine that the Pope may encourage the evangelization of peoples living on the Pacific rim, who are not so familiar with Christianity. As the center of the world moved from the Mediterranean to the Atlantic in the wake of the discovery of America, nowadays it is moving from the Atlantic to the Pacific region, this being a highly populated area and owing to its dramatic commercial and cultural development. At present only 3% of the population of that region is Christian, 1% excluding the Philippines. This 1% has to dialogue with believers of widespread and deep-rooted religions. 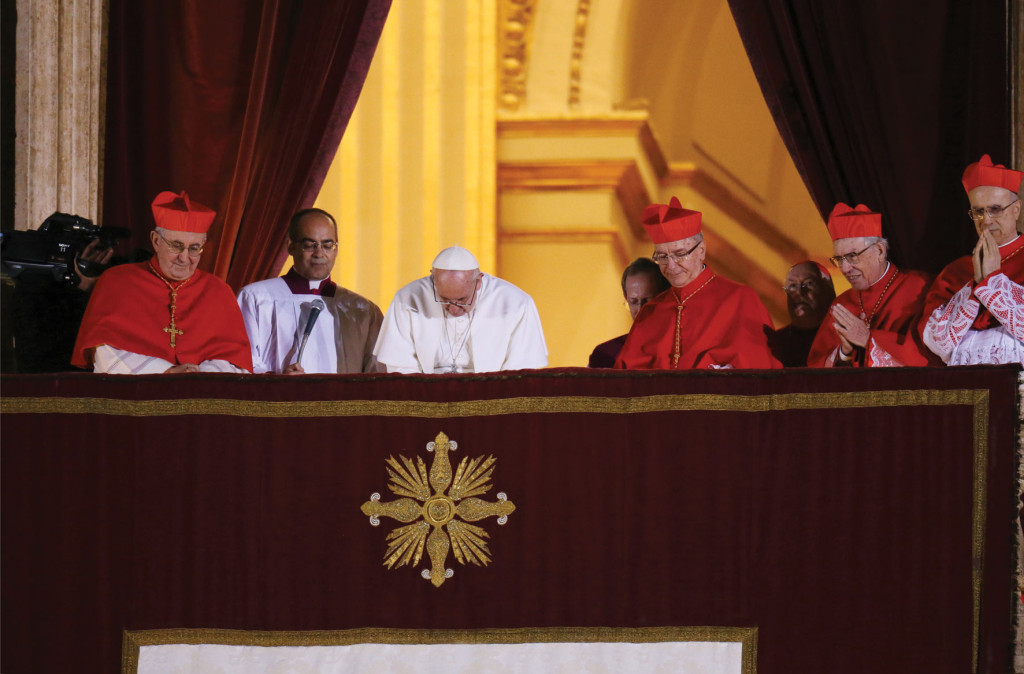 Pope Francis leads a prayer as he appears for the first time on the central balcony of St. Peter’s Basilica at the Vatican March 13 (Galazka photo).

Talking about roots, we must remember that Jorge Bergoglio is a Jesuit who, on becoming Pope, chose the name Francis. What does the choice of this name mean?

Sánchez Sorondo: Nomen omen, as the Latin saying goes. It literally means a name is an omen; in other words, a name is a project. As the Holy Father himself said to the press, he knew that the name Francis would recall St Francis of Assisi, a 13th century saint, a unique personality in that he was the closest one to the perfection of Our Lord Jesus Christ. The Franciscan vision of the world rests on four basic concepts: paupertas (poverty), humilitas (humility), simplicitas (simplicity), pax et bonum (peace and all good). This saint is so great and his program so demanding for any Christian and even more so for a prelate that no Pope, maybe out of respect for him, had chosen the name Francis. Only an Argentine born to a father from Piedmont and a mother from Liguria, therefore accustomed to cross-cultural syntheses, could combine St. Francis’ heart with St. Ignatius’ mind.

In one of his first speeches Pope Francis said: “How I would like to see a poor Church for the poor.” Some have interpreted his words as a praise of pauperism…

Sánchez Sorondo: When the Pope speaks of poverty, he does not refer to any sociological, philosophical or cultural category: he regards poverty as a theological category. It has nothing to do with Communist dictatorship. It is a purely evangelical concept involving a free choice. The Son of God lowered Himself to our level, becoming poor, becoming our fellow traveller. This is our poverty: the poverty we have received from the Son of God through His incarnation. The Christian view of social justice states that riches, a gift from God, are available to all men, which calls for a new, a less selfish and individualistic vision of life. Christ was immensely magnanimous because He was not attached to worldly goods, but gave them to the poor. The proof is that when He said to Judas, “Do what you have to do,” the Apostles interpreted His words as an invitation to distribute money to the poor, as he usually did. In the administration of the first Christian community presided over by Jesus, what was left was given to the poor. This is what Pope Francis means when he advocates a poor Church for the poor, a Church walking in Jesus’ footsteps.

Since the day of his election the faithful have been flocking to him; on Wednesdays and Sundays St. Peter’s Square is packed. The new Pope pulls in crowds larger than any of his predecessors…

Sánchez Sorondo: In three months Pope Francis has changed the face of the Church and the atmosphere that surrounds it. Not only are there lots of people in St. Peter’s Square, there is also talk of an extraordinary number of people confessing, attending Mass and converting. Rome is not Rome without the Pope, there is a power vacuum without him, but now we have a Pope who has filled this vacuum. Pope Francis’ choice of a new style, sober and essential, is admirable. His abstaining from solemn gestures and a Baroque, Ciceronian rhetoric, as it were, is significant. It is good to know that he speaks the language of the people, without seeking perfection, but using simple metaphors, like Jesus, first of all, and good preachers of all times.

The fact that Pope Francis emphasizes his spiritual humanity is a stimulus: from the start he has asked the faithful to pray for him. Needless to say, without the changes introduced by Vatican Council II and developed by Paul VI and John Paul II, who raised Jorge Bergoglio to the cardinalate, we wouldn’t have Pope Francis now.