Reverend Slawomir Oder was born in Poland in 1960 and was or­dained at the age of 28, but he has spent most of his life as a priest outside of Poland, in Rome. He studied at the Lateran Pontifical University, where he obtained his doctorate in both canon and civil law; he also taught at Rome’s major seminary; then, for many years, he has worked in the appeals court of the vicariate of Rome, of which he has become vicar general. He has worked for the Congregation for the Causes of Saints on the beatification causes of Poles like Father Stefan Frelichowski, Father Wladislaw Kornilowicz and Mother Elzbieta Czacka. 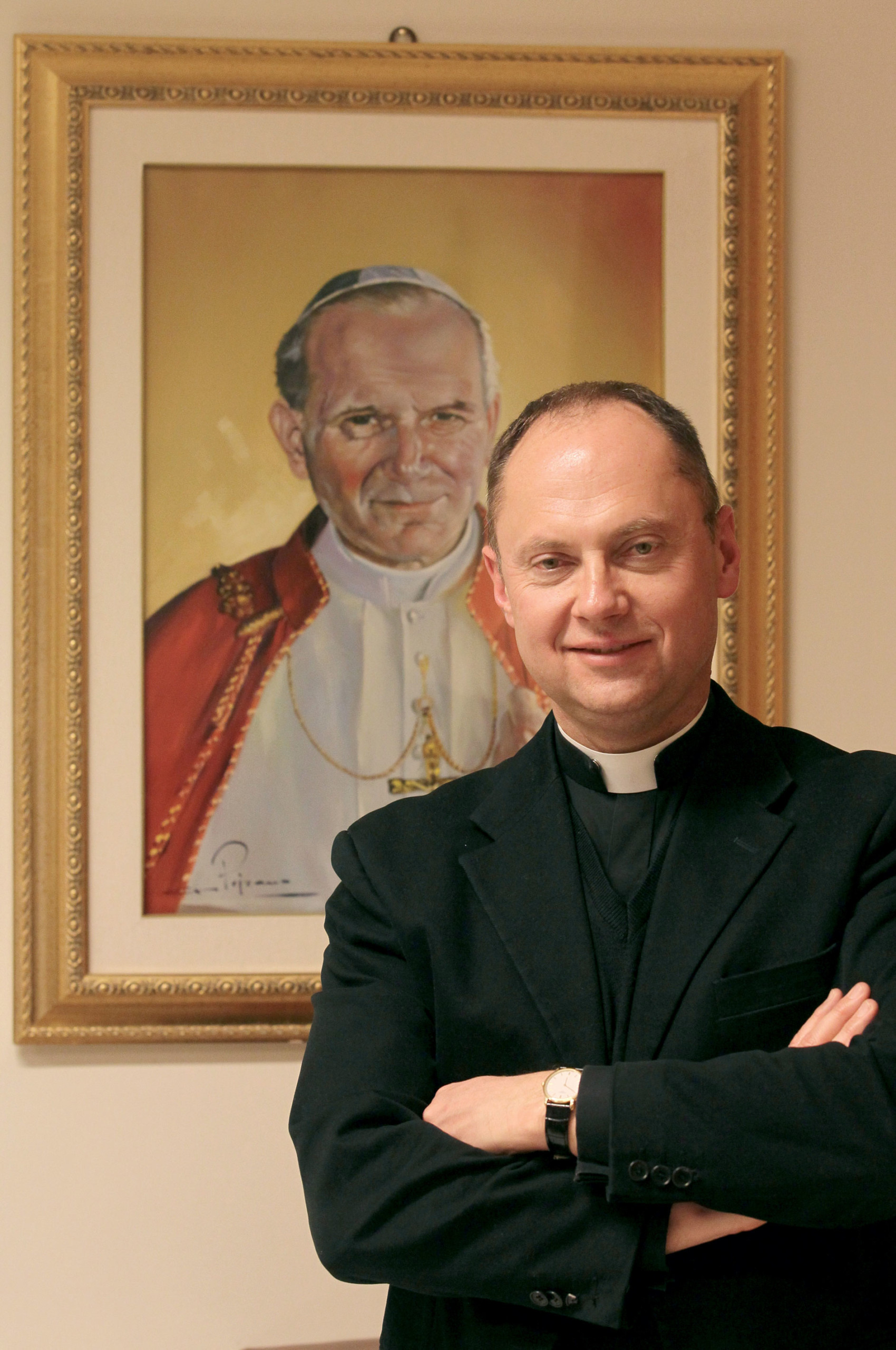 Monsignor Slawomir Oder: The year 2011 was definitely a very special year to me. On May 1, the beatification ceremony for John Paul II was held, and on October 22 the first liturgical feast of the new Blessed was celebrated. Thus after six years of hard work I achieved an important goal: the Church could finally offer the wonderful figure of the new Blessed to God’s people and the whole world. Yet 2011 was only the first stage. The process continues. In theological terms, beatitude and sainthood are on equal footing. The difference is in the area where a blessed and saint are venerated, the former being venerated locally, the latter universally. The difference is also in the role of papal authority: canonization involves the Pope’s infallibility.

Is no further process held for the canonization of a blessed?

No process is held to find out about the heroic virtues of the blessed, since these have already been ascertained. For a blessed to be canonized, practice requires that a second miracle take place.

Let us go back to the years of the beatification cause. What are the moments you remember best?

Needless to say, the moment the cardinal vicar for the diocese of Rome entrusted me with this task; it was the day of the Holy Father’s visit to St. John’s Basilica, of his first meeting with the clergy of Rome. It was the day that Benedict XVI announced his decision to depart from the norm of Canon Law, which requires a five-year wait before the opening of a beatification process. It was a great sign of trust that he gave to me. I am a judicial vicar and at the time I was already working as president of the appeals court of the vicariate of Rome. This new task was added to my daily routine. It was a great professional as well as a personal challenge, since it involved a total reorganization of my life.

The second moment was the opening of the process on the feast of Saints Peter and Paul in the presence of representatives of local Churches, amongst which were the Church of Rome and Poland, but also the Patriarchate of Constantinople. The ecumenical character of the opening of the process was in line with one of the most significant features of John Paul II’s pontificate, i.e., the ecumenical dimension.

Then came the daily work of organizing the process: the collection of documents and the meetings with the witnesses. Among these there were people who had contributed to changing the course of contemporary history with John Paul II. Therefore, contacting these great protagonists was a beautiful experience in human terms.

I remember another great moment soon after the opening of the process. A signal from France, the event which the Church would later recognize as miraculous: the healing of Sr. Simon Pierre. I lived that moment with great emotion.

I don’t hide the feelings I had during the various stages of the process: the handing in of the Positio, the document acknowledging the miracle, and the promulgation of the document on the heroic virtues. But the most significant moment to me was the exchange of the sign of peace with the Holy Father during the Beatification Mass. On the one hand, I saw the great joy of Benedict XVI, who followed this process from the start with his benevolence, his discreet prayer, with his homilies and interventions, which were his indirect contribution to the process. On the other hand, when I left St. Peter’s Square at the end of the Mass, I felt the enthusiasm of people from all over the world, I saw the Church rejoice. I felt immensely grateful to God and experienced great personal satisfaction.

The beatification process gave me the opportunity to have a close look at the story of a priest, because John Paul II was Pope, cardinal and bishop, but always re­mained a priest and lived his life in the spirit of a priest. John Paul II gave me an insight into a wonderful example of priesthood which excited me and strengthened my vocation and provided a great stimulus for my personal growth. 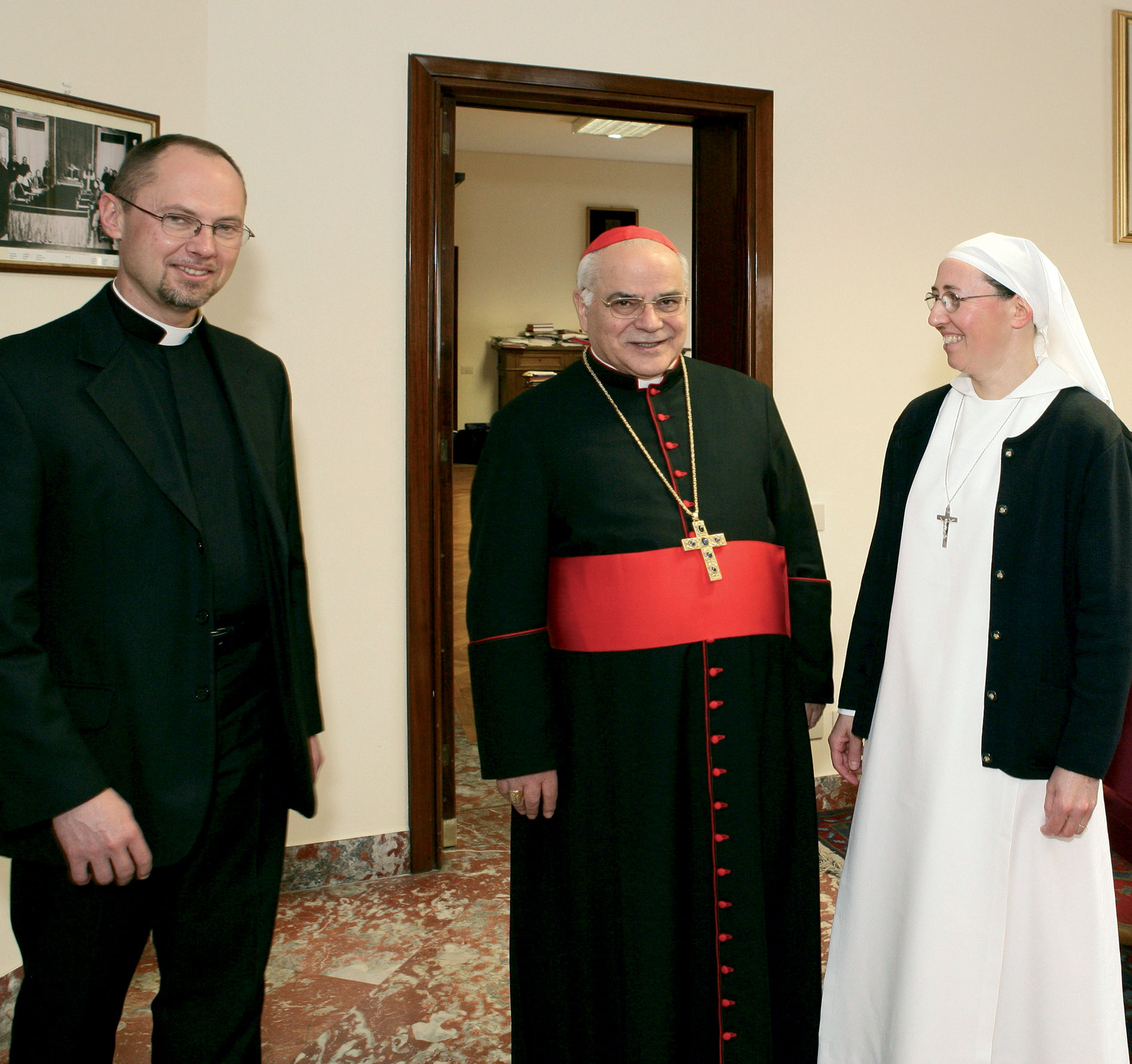 It is true that the veneration of a blessed is a characteristic of local Churches, but from the start the Congregation for Divine Worship and the Discipline of the Sacraments has authorized local episcopates to ask permission to celebrate the feast day of the new Blessed, considering that a character like John Paul II is venerated all over the world. Many episcopates have seized this opportunity to insert the feast day of Blessed John Paul II into the local calendar.

Relics of John Paul II too are becoming objects of veneration…

It is a spontaneous phenomenon; it all started with people asking for holy pictures and pieces of John Paul II’s vestments. Since veneration of Karol Wojtyla’s relics was authorized and permission was given to dedicate churches to the new Blessed, various bishops too have asked for relics to keep in a church or seminary of their dioceses. Then, in keeping with the style of John Paul II’s pontificate, the style of the pilgrim of peace and love, his relics have begun to move from place to place. The “tour” of the relics started on the occasion of World Youth Day in Madrid; they stayed there as a sign of this day, then they arrived for public display in Mexico. The tour lasted from October till December and touched all Mexican dioceses. I took part in a section of this tour. It was a touching experience, since the Mexican people viewed it as another visit from John Paul II. After the Mexican tour, some Colombian bishops asked for the relics. At the moment they are in Nigeria. There is no magic about this kind of piety: relics are a sign of a saint’s presence amongst us, a piece of historical and tangible evidence. I must say that I was greatly edified by the experience of this pilgrimage, because the faithful were prepared in the right spirit, with the catechesis and the teaching proposed by the Pope.

What is the postulator’s role now that John Paul II has been proclaimed blessed?

As I have already said, canonization does not require a new process to ascertain the presence of heroic virtues; this stage, the most difficult and demanding one, is now behind us. My task now is to keep careful watch for any elements that might lead to the canonization of Karol Wojtyla.

Can you tell us about the miracles attributed to John Paul II?

I can say that this phenomenon, which started before the beatification of Karol Wojtyla, has not stopped. My office keeps receiving letters and evidence of graces received. Some of these letters are very interesting and significant. I am focusing my attention on some cases. At the moment I’m still waiting and do not intend to go into further details.

What can you say to those asking how long it will take until Blessed John Paul II is canonized?

In this case no time limits are imposed by canon law. This no doubt tells us that the Lord is the one leading the process. The moment the Lord thinks it proper to give the Church a sign, this sign will be unmistakable and we will know for sure that the time has come for John Paul II to be canonized.

How is a miracle ascertained?

I am the one who conducts the first inspection, obviously with the assistance of experts. Once the case is ascertained, a canonical process is held during which all documentary evidence is collected; then everything is handed over to the Congregation for the Causes of Saints. It is up to the medical board within the Congregation to establish whether or not a given case can be accounted for in scientific terms. The theological commission, on the other hand, has to ascertain the cause-and-effect relationship between the request to the Blessed for intercession and the result achieved with the manifestation of divine grace.

The Holy Father, at the request of the prefect of the Congregation for the Causes of Saints, authorizes the publication of the decree acknowledging the miracle, thus opening the way to canonization.