People around the Vatican

People around the Vatican 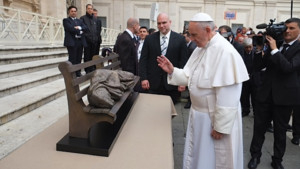 A year ago, TIMOTHY SCHMALZ’s bronze sculpture “Jesus the Homeless” had been rejected by St. Patrick’s Cathedral in New York and St. Michael’s Cathedral in Toronto.

But in late November, Pope Francis blessed the sculpture at one of his weekly general audiences in front of thousands of eager pilgrims. The pontiff touched the knee of the sculpture and prayed for a few moments. Afterward, he told Schmalz he thought the sculpture was a “beautiful piece of art.”

Appropriately, “Jesus the Homeless” may have found a permanent home in Rome, very close to the Vatican. The plan is for the sculpture to be placed close to the Vatican Radio offices near the Tiber River in memory of a homeless woman who slept there every night before dying outside in the cold.

Schmalz grew up outside of Toronto, and his interest in producing religious sculptures was born when he became “disenchanted” by the abstract artwork he saw being produced at Ontario College of Art, where he studied for several years.

After undergoing a religious conversion, the artist realized he wanted to produce artwork that would “contribute to the world.” Inspired by the work of great religious sculptors like Michelangelo and Bernini, the sculptor opened his own studio and began producing his own religious artwork. Schmalz says that Christian artwork has provided him with an “endless well” for creativity.

In 2011, inspired by a section of Matthew 25, the artist began working on “Jesus the Homeless,” which is perhaps his most famous work. The bronze sculpture depicts a weary Jesus wrapped in a blanket, face covered. With only the feet exposed, Schmalz says viewers are forced to take a second look at the sculpture, realizing after a few minutes that the sculpture is Jesus. 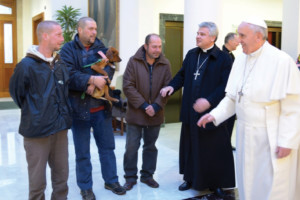 Pope Francis, Archbishop Konrad Krajewski and three homeless men, invited by the pontiff to have breakfast with him on the day of his birthday.

POPE FRANCIS started the day with his usual morning Mass held in the chapel of the Domus Sanctae Marthae residence where he lives.

However, he requested that the Mass be attended by the residence staff “in order to create a particularly family atmosphere for the celebration,” the Vatican press office said in a written statement December 17. Cardinal Angelo Sodano, dean of the College of Cardinals, represented the world’s cardinals at the Mass, and Archbishop Pietro Parolin, Vatican secretary of state, attended.

After the Mass, all those present sang “Happy Birthday” to the Pope, the Vatican statement said. The Pope then met with everyone, including three homeless men who were brought there by Archbishop Konrad Krajewski, the papal almoner.

The archbishop invited the first group of men he had found early that morning sleeping under the large portico in front of the Vatican press hall on the main boulevard in front of St. Peter’s Square, according to the Vatican newspaper, L’Osservatore Romano.

The men, in their forties, were from Slovakia, Poland and the Czech Republic. They loaded all their belongings into the archbishop’s car; the dog rode in the middle.

When they got to the residence, they waited for the Mass to end, then greeted the Pope. Together with Archbishop Krajewski, they gave the Pope a bouquet of sunflowers, because they always turn toward the sun like the Church turns toward its sun, Christ, the archbishop explained.

The Pope invited the men to have breakfast with him in the residence dining room, where they talked and shared a few laughs.

Some Vatican offices paid homage to the Pope in different ways: the Vatican television center created a special video of visual highlights of Pope Francis’ nine-month-long pontificate; the Vatican internet office posted on the vatican.va website an e-album of images and quotes by the pope; the Vatican newspaper, L’Osservatore Romano, rolled out a newly designed website at www.osservatoreromano.va that lets readers easily share stories on social media. 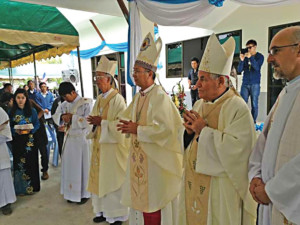 Bishop Antonio Mattiazzo, the second from right, during the inauguration of the Benedectine monastery in Thailand.

Monsignor ANTONIO MATTIAZZO’s dream has come true: the bishop of Padua inaugurated the first Benedictine monastery in Thailand on January 18.

A project which the bishop had been working on for years has been realized thanks to his tenacity: a strong signal from Christianity in Thailand, a Buddhist land — the first Far East country to host a Christian monastery. The monastery is made up of 10 cells for the monks (there are five at the moment) and eight rooms for guests. The life of the monks, all of whom come from Vietnam, is divided between prayer (the Liturgy of the Hours) and work, that is, the cultivation of maize, rice and fruit trees.

About 400 people attended the blessing ceremony, a warm welcome for the newly established community.

Father Gaetano Borgo, director of the Diocesan Missionary Centre, which sends pictures, texts and video on a daily basis, (available on website www.diocesidipadova.it) wrote: “Today is a beautiful day! Bishop Antonio will attend an important event in the Diocese of Chiang Mai: the blessing ceremony of the first Benedictine monastery in Thailand and the establishment of the first community made up of four monks from Vietnam and Abbot Stephan, whom Bishop Antonio met at the Abbey of Praglia. On that occasion, the bishop expressed his desire to create a center of Christian monastic life, namely of Benedictine life in Thailand, where Buddhist monasteries are found everywhere; this would be an opportunity for encounter and interfaith dialogue. Many years have passed and the Spirit opens the doors. “I have a dream,” Bishop Antonio said in his farewell and thank you speech, “a dream which is coming true thanks to the support of people who believed in this project!”

The bishop presented the monastery with an image of the Blessed Virgin. “May the Virgin Mary guide and mark the rhythm of your steps, you daily work and prayer,” he said. “Bear witness to God and be His look among all these wonderful people who have been summoned here for a brand new start.”

A LIBERATION THEOLOGIAN AT THE VATICAN 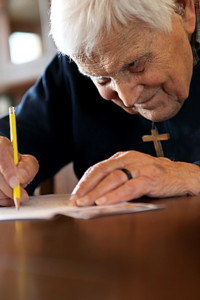 On January 18, Father ARTURO PAOLI, an Italian religious and missionary of the Little Brothers of the Gospel, well known for his religious and social commitment for and with the poor in Italy and Latin America, where he spent 45 years, was received by the Holy Father in St Martha’s House in a long private audience.

Arturo Paoli is ranked among the founders of liberation theology, the Latin American theological movement condemned by John Paul II and Benedict XVI for its contiguity to Marxism; he was also granted the title of righteous among the nations for his commitment in favour of Jews persecuted by the Nazis during the Second World War.

Paoli, who turned 101, now lives in a small house dedicated to Charles de Foucauld near Lucca, his hometown. A few weeks ago he expressed his strong desire to meet Pope Francis; the Holy Father granted him a private audience which lasted almost 40 minutes.

During his Latin American years Arturo Paoli spent 14 years in Argentina, from 1960 to 1974. There he met the then Jesuit father provincial Jorge Mario Bergoglio. He was forced to leave Argentina under Peron’s regime; he moved to Venezuela and then to Brazil in 1985, until his definitive return to Italy in 2005. 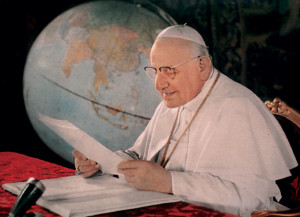 During one of the the first television broadcasts of Vatican ceremonies, at the time of Pope JOHN XXIII (1958-1963), an unusual episode occurred. As Fabiano Fabiani, at the time an Italian state television (RAI) executive, recently related during the TV program A sua immagine (“In his own image”), Pope John was to read in front of the camera a comment on Pacem in Terris (“Peace on Earth”), his best known encyclical. However, the lights the technicians had placed in the Apostolic Palace disturbed him, so he asked that they be moved. Needless to say the technicians rushed to comply with the Pope’s wish. Then, at the end of the recording, the Pope asked: “Which of you is in charge of the lighting?” The director of photography came forward somewhat timidly. The Holy Father intended to apologize to him: “I’ve spoiled your work, I’m sorry,” he said. When the director of photography nervously replied that there was no problem, Roncalli added: “The Pope cannot dislike light.”