“Hungary Before Everything, God Above Us All”

“Hungary Before Everything, God Above Us All”

The president of Hungary is controversial, but steadfast

“Why haven’t we Hungarians disappeared?… The key to our survival was the adoption of the Christian faith.” 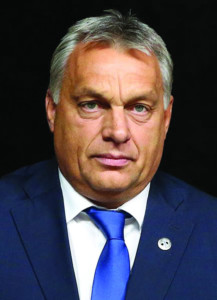 “Hungarians account for 0.2 percent of the world’s population. Is there any point in a nation of this size taking a stance and standing up for a cause? Our answer is ‘Yes,’” says Viktor Orbán, the current prime minister of Hungary. He believes that despite its size, Hungary has a duty to stand for the Good. He continues, “In their day the Twelve Apostles surely accounted for a smaller percentage of the world’s population than we Hungarians do today; yet here we all are. We are convinced that good inspires good, the Hungarian people’s support inspires courage, the example we set can spread far and wide.”

Orbán has served as prime minister to Hungary for a total of thirteen years. Born and raised in a middle class family in Central Hungary, the needs of the Hungarian people are close to his heart. After completing two years of military service, he studied law at Eötvös Loránd University in Budapest, writing his master’s thesis on the Polish Solidarity movement.

In his “State of the Nation” address delivered at the beginning of 2019, Orbán stated: “Thirty years after the fall of Communism, on the eve of a pan-European parliamentary election, Europe finds itself in the position that we must stand up again for our Hungarian identity, for our Christian identity, protect our families and communities, and also protect our freedom.”

Standing before cardinals, bishops and state officials at the Second International Conference on Christian Persecution, this past November, Orbán recalled the history of the Hungarian people, pointing to the Christian Faith as the sole means of their survival, and connecting this with the Hungarian Constitution: “One thousand one hundred years ago, the majority of the Hungarian tribes — hundreds of thousands of people — arrived in this region, and settled down to start their lives here. We were not the first: many other peoples came here before us, but they disappeared, died out, or simply moved on. To this day Hungarians are curious to find out why we didn’t suffer the same fate. Why haven’t we Hungarians disappeared? Why have we Hungarians survived, even though in this region we are outsiders? We’re surrounded by Germanic and Slavic peoples, and we don’t belong to any of them… the key to our survival, was our adoption of the Christian faith.”

While many focus on Orban’s opposition to unrestricted immigration, what is important to note, rather, is Orban’s devotion to Hungary and the Hungarian people, and finally to God above all else. Orban sees immigration in Hungary as a threat to traditional Hungarian values such as family Christianity: “We are living in times when fewer and fewer children are being born throughout Europe. People in the West are responding to this with immigration: they say that the shortfall should be made up by immigrants, and then the numbers will be in order. Hungarians see this in a different light. We do not need numbers, but Hungarian children. In our minds, immigration means surrender. If we resign ourselves to the fact that we are unable to sustain ourselves even biologically, by doing so we admit that we are not important even for ourselves. So why would we be important for the world? The fate of such peoples is slow but certain obliteration, until they become a mere cloud of dust on the highway of nations. It is not written in the great book of humanity that there must be Hungarians in the world. It is only written in our hearts…. Hungary before everything, God above us all.”