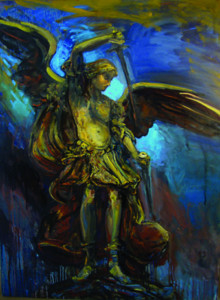 vision of St. Michael the Archangel by Cornelius Sullivan

At the time of the plague of 590 AD and the Black Death of 1348 in Rome, prayers were the primary, and effective, remedy. Prayer produced an astonishing sign in the sky that the deadly plague would end: a vision of St. Michael the Archangel sheathing his sword appeared above Emperor Hadrian’s Tomb, signifying the end of the plague of 590.

As the model for my painting (right), I used the large bronze that is currently atop that building. The Archangel isin a Roman soldier’s garb and he is indeed putting away his sword. I painted how I imagined the vision to look, with shimmering movement, and blood stains in a brilliant sky.

St. Pope Gregory the Great and hundreds of pilgrims processed, praying, from the Basilica of St. Mary Major through the streets of Rome toward St. Peter’s Basilica, carrying an icon of the Virgin Mary: it was the image of Holy Mary, Protectress of the Roman People — the Santa Maria Salus Populi Romani — believed to have been painted by St. Luke.

Those in the procession saw the vision of St. Michael, dressed in the armor of a Roman soldier, returning his bloodied sword to the scabbard. 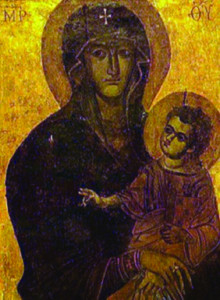 Emperor Hadrian’s Tomb has since been called Castel Sant’Angelo, after the “holy angel” who appeared there.

The miraculous vision of the archangel was commemorated by a chapel dedicated to St. Michael, built atop the mausoleum, and later, by a statue of the angel placed above the chapel.

Pope Gregory’s vision was never forgotten. In fact, it was confirmed by a similar miracle marking the end of the Black Death of 1348.(1)

This is typical of Roman recycling that can combine elements from different eras.

In this case, the bronze wings were screwed onto the marble sculpture.

In like manner, the Emperor’s Tomb was recycled to become a fortress, then a prison, then a sanctuary with a secret passageway from the Papal Palaces, and now it is one of the iconic buildings that form the Roman skyline.

In Milan, which was devastated by the plague of 1576, St. Charles Borromeo, then Archbishop, used prayer combined with active heroic charity to combat the plague.

Caravaggio’s biographer, Helen Langdon (Caravaggio: A Life, Farrar, Straus, and Giroux, 1998), presents a moving account of how St. Charles gave his life to care for the sick. Caravaggio’s grandfather and his father both died from the plague in 1577.

Another Caravaggio biographer, Andrew Graham-Dixon (Caravaggio: A Life Sacred and Profane, W.W. Norton, 2010), does not have such a high regard for the saint. He wrote, “Borromeo did not entirely succeed in his efforts to turn Milan into a model Tridentine police state.” 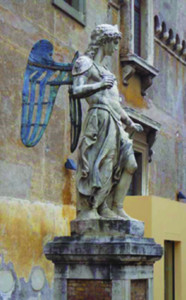 the marble statue of St. Michael inside Castel Sant’Angelo next to the chapel dedicated to him

I always wondered why Dixon, not a fan of the Counter-Reformation, chose to write about the quintessential Catholic artist Caravaggio.

Dixon disparaged the promotion of confession and other sacraments by St. Charles Borromeo and the Counter-Reformation with its sacred art which made a powerful response to the whitewashed iconoclasm of Protestantism.

Borromeo kept the lengthy Council of Trent, 1545 to 1563, going long enough for it to express the conviction that the Church would continue with renewed zeal to make sacred art.

Helen Langdon writes about St. Charles Borromeo during the plague in Milan: “Carlo, with unwavering courage, labored tirelessly to bring comfort to the sick, to both their bodies and souls, winning the devotion of the poorest and most miserable.

“Above all, Carlo, with immense rhetorical skill, transformed the city into a vast and highly orchestrated display of penitence and of ceaseless prayer.

“The Milanese, whom the quarantine laws forbade to go to church, worshipped at their doors and windows. Tabernacles and devotional images embellished the roadsides, while at the crossroads, and throughout the squares of the city, Carlo erected altars, where Mass was celebrated, and those confined to their houses could listen at the windows. And at the center of this intense display of devotion Carlo himself, bearing aloft the relic of the Holy Nail from the cathedral, shoeless and oblivious to his bleeding feet, walked amid a dolorous procession of penitents. (Those Catholics are always processing and praying.) Borromeo wore a purple mantle with a hood and a rope around his neck, like a condemned man. The Canons were dressed in the same way. Carlo had become an emblem of Catholic charity, engraving in his own flesh the sufferings of Christ and re-creating the glories of the early Church, seeking a heroic martyrdom in the streets of Milan.” 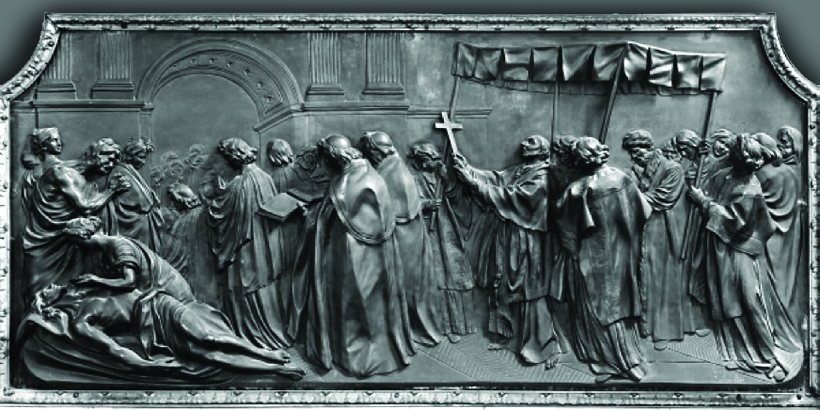 Procession of St. Charles Borromeo to Cure Milan of the Plague of 1576, by Edme Bouchardon (1698-1762), now in the Chapelle Royale, Chateau de Versailles, France

Plagues look different now, but in many ways, they affect us in the same way. We can see CAT scans and molecular diagrams today, but contagion and quarantine remain the same as they ever were.

Plagues and viruses of today produce the heroism of doctors, nurses, and health care workers, and to them, we are endlessly grateful. But let us never lose sight of the fact, demonstrated through the ages, that, in truth, “Our help is in the Lord.”

Information is from a history of some apparitions of St. Michael the Archangel at Castel Sant’Angelo from The History and Decoration of Pont Sant’Angelo, Mark Weil, 1974, The Pennsylvania State University Press, and Gregory the Great, F.H. Dudden, 1905, London.

*Cornelius Edmund Sullivan, MFA, is an artist, art professor, lecturer and consultant in Rome and the U.S.