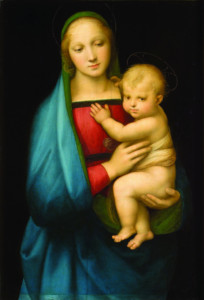 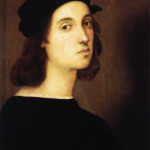 With over 70,000 advance ticket sales from all over the world and, as of this writing (in late February) no cancelations in spite of coronavirus, the mega show three years in the planning “Raffaello 1520-1483” was opened on March 3 by Sergio Mattarella, the president of Italy. To celebrate the 500th death anniversary of the “divin pictor” or “dio mortale” (“mortal God”) as his contemporary artist-biographer Giorgio Vasari called Raphael, it’s on in the Quirinal’s Scuderie until June 2. [Note: The government announced in early March the closing of the show until April 3 due to the virus.]

On display are 240 works-of-art; 120 of them (including the Tapestry of The Sacrifice of Lystra based on his cartoons and his letter to Medici-born Pope Leo X, reign 1513-21, about the importance of preserving Rome’s antiquities) are by Raphael himself. Twenty-seven of these are paintings, the rest mostly drawings.

Never before have so many works by Raphael been displayed in a single exhibition. They are on loan from 55 different private collections and museums: The Louvre, London’s National Gallery and Royal Collection HM Elizabeth II, Washington D.C.’s National Gallery, The Metropolitan, Florence’s Palazzo Pitti, Rome’s Palazzo Barberini and Villa Borghese, to name just a few. Several are returning to Rome for the first time since their creation there.

The most generous lender is the Uffizi in Florence with 49 works, mostly drawings. “Only 10 of the Museum’s 21 Raphael canvases, since 2018 on display in ‘a room of their own’ with works by Michelangelo and Leonardo, have been loaned, but visitors who’ve seen ‘Raffaello’ will receive a 33% discount on the entrance fee to the Uffizi and Palazzo Pitti and vice versa,” German art historian Eike Schmidt, Director of the Uffizi since 2015, announced at a late February press conference at the Ministry of Culture. 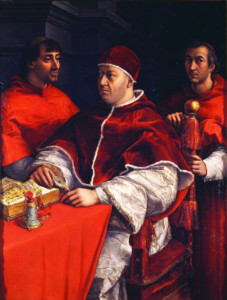 One Uffizi loan is Raphael’s realistic Portrait of Pope Leo X with Two Cardinals (c. 1517). Commissioned by the Pope himself and painted in Rome, it was a wedding present for his nephew Lorenzo, the Duke of Urbino, who fathered Catherine who became Queen of France, and so ended up in the Uffizi. The cardinal on the left is the Pope’s nephew, Giuliano de’ Medici (future Pope Clement VII); the other is Cardinal Luigi de’ Rossi, a maternal cousin. It was especially restored for “Raffaello” at the Opificio delle Pietre Dure in Florence.

The other Uffizi paintings by Raphael are his San Giovanni Battista, La Velata, perhaps a portrait of Raphael’s great love Margherita Luti; a portrait of Cardinal Bernardo Dovizi da Bibbiena (1470-1520), a patron of Raphael, a close advisor to Pope Leo X and the uncle of Raphael’s official but not beloved fiancée; Ezekiel’s Vision, Madonna del Granduca and Madonna dell’Impannata, a portrait of wall-eyed Tommaso Inghirami, Prefect of the Vatican Library, A Young Man with an Apple, and one of his two self-portraits here, which is the logo of the exhibition.

Raphael is best-known for his Madonnas: three, all painted in Rome, are returning for the first time: Washington’s d’Alba (c. 1510), Capodimonte’s (Naples) of Divine Love (c. 1516), and the Prado’s of the Rose (1518-20). He is also famous for his realistic portraits. The most famous is on loan from Rome’s Palazzo Barberini and depicts, according to Vasari although with no evidence, his beloved mistress, Margherita Luti, known as La Fornarina because her father was a baker.

However, “Raffaello 1520-1483” concentrates on the artist’s love of antiquity and of Rome, to which he owes his fame, thanks to his patrons Pope Julius II, Pope Leo X, and their banker Agostino Chigi.

These inverted dates are intentional — a flashback of sorts. At the time of his death at only age 37 on Good Friday, Raphael, at the height of his fame, was already a cult figure in Rome. He was venerated and it was commonly believed that his death on Good Friday was not a coincidence, but the will of God. During the eight days of his high fever, he’d requested to be buried in the Pantheon, the temple to all the ancient gods before becoming the Christian church Santa Maria dei Martiri. It was the ancient monument he loved most. Hence the exhibition begins with two paintings of his tragic premature death: Raphael’s Funeral by Piero Vanni (1845-1905) and Homage Paid to Raphael on his Deathbed by Pierre-Nolasque Bergeret (1782-1863).

Next comes a reproduction of his tomb with a reproduction of the Madonna del Sasso by his trusted collaborator Lorenzetto, who used an ancient Roman sculpture of Venus as his model, and Raphael’s epitaph, written by his friend Pietro Bembo (1470-1547), a Venetian scholar and humanist, who met Raphael at the court of Urbino. The Latin text reads: “Here lies the great Raphael, by whom Nature feared to be conquered while he lived, and, when he was dying, feared herself to die.”

The centerpiece of Room Two — not to mention the exhibition’s raison d’être — is Raphael’s letter written with the help of courtier, diplomat, soldier, and author of The Book of the Courtier, Baldassare Castiglione (1478-1529), in 1519 to Pope Leo X. Although it may never have been sent, the two close friends begin by emphasizing the importance of preserving the glory of ancient Rome so that contemporary Rome could once again be the center of the world and of culture. 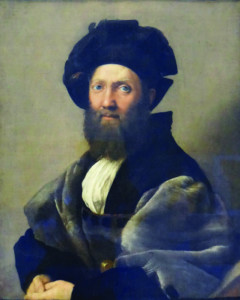 A second section includes a summary of the history of architecture and building techniques, and the third and last a technical survey of the ancient monuments under study.

Hence the rest of the exhibition traces the direct influence of ancient Roman art on Raphael’s creations. Clearly some of the ancient sculptures on display inspired the figures in his paintings, like the head of Isis and Santa Cecilia or Antinuous and Jonah.

On display in Rooms 2 and 3 are portraits of the Letter’s three protagonists by Raphael: Leo X, Castiglione and his self-portrait with a friend, the latter two on loan from the Louvre. Also on display here are many recently-excavated ancient altars and stela because in 1514 Pope Leo X had put Raphael in charge of collecting ancient artifacts in the hopes of rebuilding a modern Rome as glorious as Imperial Rome.

Also here are Raphael’s drawings of ancient sculptures and monuments, in particular the Pantheon, his compass and topical surveys of the ancient fora by the architect Antonio da Sangallo theYounger (1484-1546).

Generally speaking, the 10 rooms of “Raffaello 1520-1483” follow a retrospective chronological order. The highlights in Rooms 4 and 5 are his religious works; Room 6 his portraits; Room 7 his architectural drawings, especially those for St. Peter’s Basilica; and Rooms 8-10 his pre-Rome works. The earliest of these, an ink drawing of a hand holding a pen and a face of a young boy, dates to 1497-9.

Rome is the perfect location for a mega-show about Raphael because, as I wrote in my January article “Raphael and His Friends from Urbino,” many of his greatest works are frescoes and thus not transportable, not to mention the ancient ruins that he so loved.

Therefore after visits to “Raffaello 1520-1483,” his frescoed rooms, paintings, and Loggia in the Vatican Museums and St. Peter’s, wander in the various fora and Nero’s Golden House on the Oppian Hill; pay him homage at his grave in the Pantheon; admire his architecture and mosaics in the Chigi funerary Chapel of Santa Maria del Popolo and in the Church of Sant’Eligio degli Orefici; and his Sybil fresco in a chapel of the church Santa Maria della Pace and his Prophet Isaiah in the Basilica of Sant’Agostino, both near Piazza Navona; and especially his many frescoes in Agostino Chigi’s Villa Farnesina in Trastevere.

To learn more about this genius who never married, his loves, and his life in Rome, read Vasari’s biography and the historical novel, The Ruby Ring by Diane Haeger.

After this full-immersion experience, one can’t help but wonder what this architect, drauftsman, painter, poet, and archeologist, who died of mysterious causes, most likely exhaustion, might have accomplished had he lived Leonardo’s 67 or Michelangelo’s 89 years.