The Church: In or Of the World?

The Church: In or Of the World?

The Vatican’s Dilemma as Aggressive Globalism Continues on the March 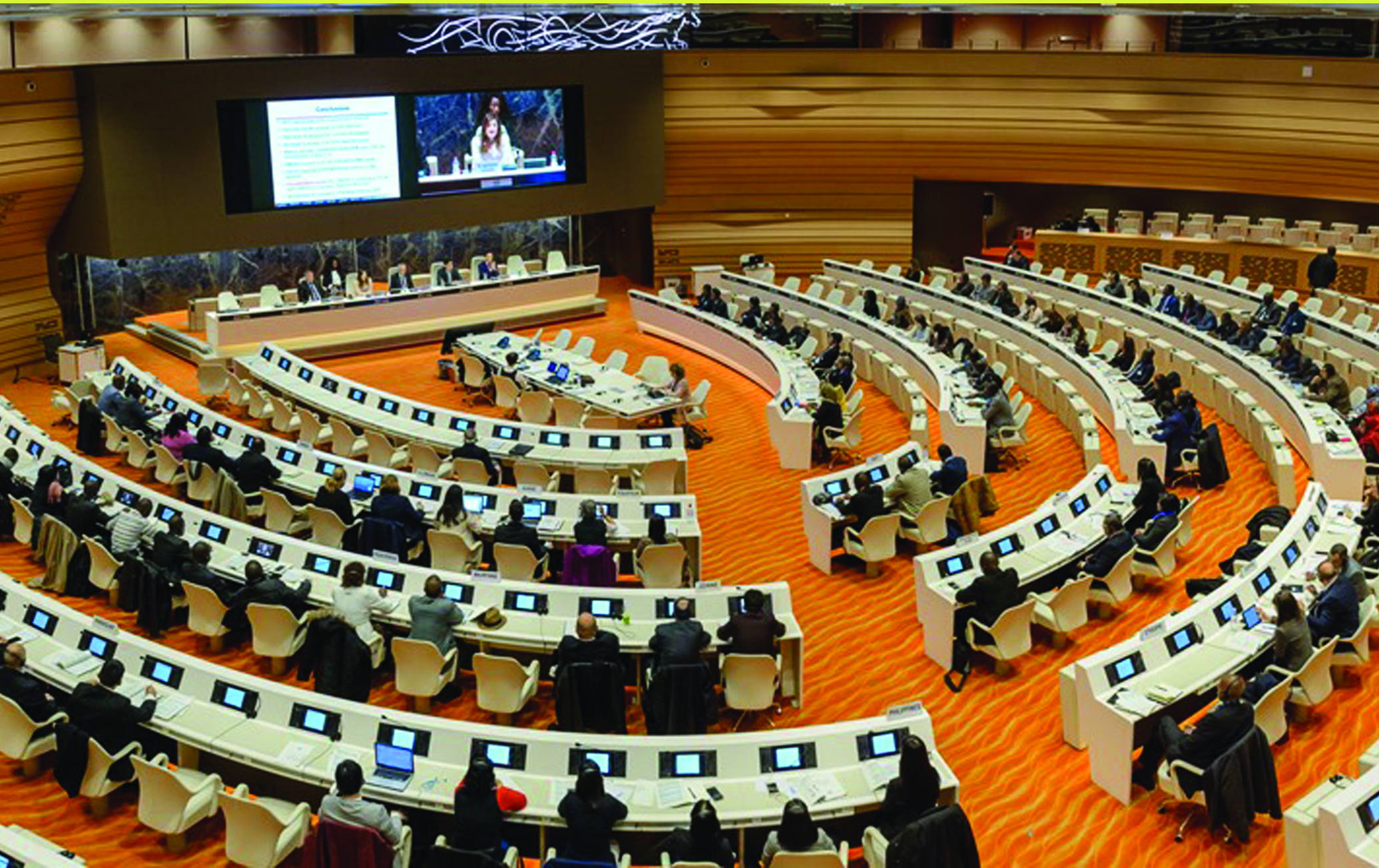 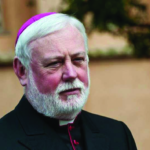 Very recently Archbishop Paul Richard Gallagher, the Vatican’s Secretary for Relations with States, made a statement at a conference sponsored by the United Nations Conference on Trade and Development (UNCTAD) which highlights a continuing and unresolved dilemma facing the Church in a pluralistic world, increasingly dominated by people who are indifferent if not hostile to any organized religion.

The UNCTAD conference had as its focus the motto, “Prosperity for All” — surely a goal that the vast majority would agree with and which has been a constant theme of papal social doctrine as well. Nor were Archbishop Gallagher’s short speech and the specific items he advocated out of line with the tradition of modern papal social teaching initiated by Leo XIII. He highlights the increasing disparity between rich and poor, both rich and poor nations and the rich and poor even within countries considered securely developed. He calls attention to the contribution of the Covid epidemic to this disparity in that “[t]hose with digital skills and financial assets made gains, while those without such resources fell further behind.” The Archbishop notes the effects of “unregulated financial markets and institutions with short-term horizons.” All this, as we will see, is in line with the thrust of numerous statements by more than one pontiff.

Even Gallagher’s proposed remedies, “fiscal redistribution and increasing the progressiveness of income taxation schedules” and “[a]equate enforcement of corporate taxation” can hardly be called alien to Catholic tradition. What then is the unresolved dilemma that I mentioned earlier? What objections can be raised with regard to the Archbishop’s speech? 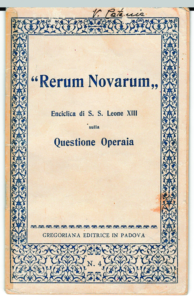 Before addressing what I am calling an unresolved dilemma, let us make sure that we understand exactly how radical traditional Catholic social teaching often was. Far from endorsing the status quo brought about by the capitalist economic system that arose in the eighteenth century, Leo XIII and his successors reacted with strong language. Leo XIII: “Hence by degrees it has come to pass that Working Men have been given over, isolated and defenseless, to the callousness of employers and the greed of unrestrained competition. (Rerum Novarum, no. 3)

“On the one side there is the party which holds the power because it holds the wealth; which has in its grasp all labor and all trade; which manipulates for its own benefit and its own purposes all the sources of supply, and which is powerfully represented in the councils of the State itself. On the other side there is the needy and powerless multitude, sore and suffering, always ready for disturbance. (Rerum Novarum, no. 47) 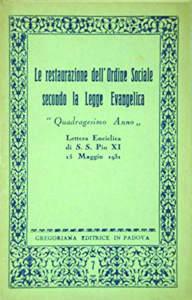 Then, his even more outspoken successor, Pius XI: “Capital, however, was long able to appropriate to itself excessive advantages. It claimed all the products and profits and left to the laborer the barest minimum necessary to repair his strength and to ensure the continuation of his class. For by an inexorable economic law, it was held, all accumulation of riches must fall to the share of the wealthy, while the workingman must remain perpetually in indigence or reduced to the minimum needed for existence. (Quadragesimo Anno, no. 54)

“Each class, then, must receive its due share, and the distribution of created goods must be brought into conformity with the demands of the common good and social justice. For every sincere observer realizes that the vast differences between the few who hold excessive wealth and the many who live in destitution constitute a grave evil in modern society.” (Quadragesimo Anno, no. 58) 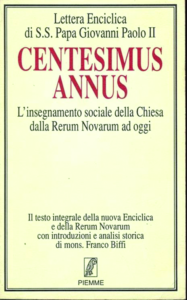 Then, finally, from John Paul II’s Centesimus Annus, the encyclical erroneously but widely regarded as a kind of paean to triumphant free-market economics. “There is a risk that a radical capitalistic ideology could spread which refuses even to consider these problems, in the a priori belief that any attempt to solve them is doomed to failure, and which blindly entrusts their solution to the free development of market forces.” (no. 42)

“The Western countries… run the risk of seeing [the collapse of Communism] as a one-sided victory of their own economic system, and thereby failing to make necessary corrections in that system.” (no. 56)

I hope that these few quotations — which I could easily multiply to fill several pages — will be sufficient to disabuse the minds of any readers that the utterances on economics by Pope Francis and his collaborators are something unheard of in the history of the Church. So, what then do I mean when I speak of a dilemma?

This striking quotation from Pope Leo will put into boldest relief the dilemma I am alluding to. “We approach the subject with confidence, and in the exercise of the rights which belong to Us. For no practical solution of this question will ever be found without the assistance of Religion and the Church. It is We who are the chief guardian of religion, and the chief dispenser of what belongs to the Church, and We must not by silence neglect the duty which lies upon Us.” (Rerum Novarum, no. 16)

While Pope Leo notes the necessary and important contributions of others, of “the rulers of States, of employers of labor, of the wealthy, and of the working population themselves,” he clearly has no hesitation about asserting a primary role for the Roman Pontiff.

Although the arguments he and later Popes employ in their social encyclicals are chiefly drawn from natural law, not specifically from the Gospel or Christian revelation, nevertheless these Popes do not fail to place their entire enterprise within a Christian context. Perhaps the clearest example of this, my favorite one in fact, is the formal title of Pius XI’s 1931 encyclical Quadragesimo Anno, “On Reconstructing the Social Order and Perfecting It Conformably to the Precepts of the Gospel.”

In this encyclical in which Pope Pius notes that private property is not an absolute right, condemns free competition as the means of organizing an economic system, calls attention to the fact that the programs of moderate socialism “often strikingly approach the just demands of Christian social reformers,” and much more along these lines — in this encyclical his whole effort is to reconstruct the social order and perfect it conformably to the precepts of the Gospel. He, like Leo , has no doubt but that economic and social justice is part and parcel of the Church’s message, and moreover, that the Church has a specific and unique contribution to make, one that no other group or organization on earth possesses. And in this lies our dilemma.

It is natural that in a pluralistic world Catholic spokesmen desire to have a seat at the table. To ignore the existence and activities of the United Nations would be folly. In 1931 the Catholic historian Christopher Dawson wrote, “The Puritan or the sectarian Christian can isolate himself from the age in which he lives and construct a private world in harmony with his religious convictions. But for the Catholic this should be impossible. Catholicism stands essentially for a universal order in which every good and every truth of the natural or the social order can find a place.”

The difficulty consists in walking a fine line, on one side of which lies the irrelevance of sectarian Christians who dwell in an intellectual ghetto; on the other side lies the error of regarding the Church as just another charitable or international aid organization, or going to excessive lengths to ingratiate her with the secular powers that be. (Why does Gallagher, for example, an Englishman, feel compelled to mouth one of the slogans of the Biden administration and speak of that “which is urgently needed to build back better [my emphasis] from the devastation of the Covid-19 pandemic”?) Moreover, there is the additional danger of failing to make it clear whenever the Church might question solutions so confidently agreed upon by the secular world. 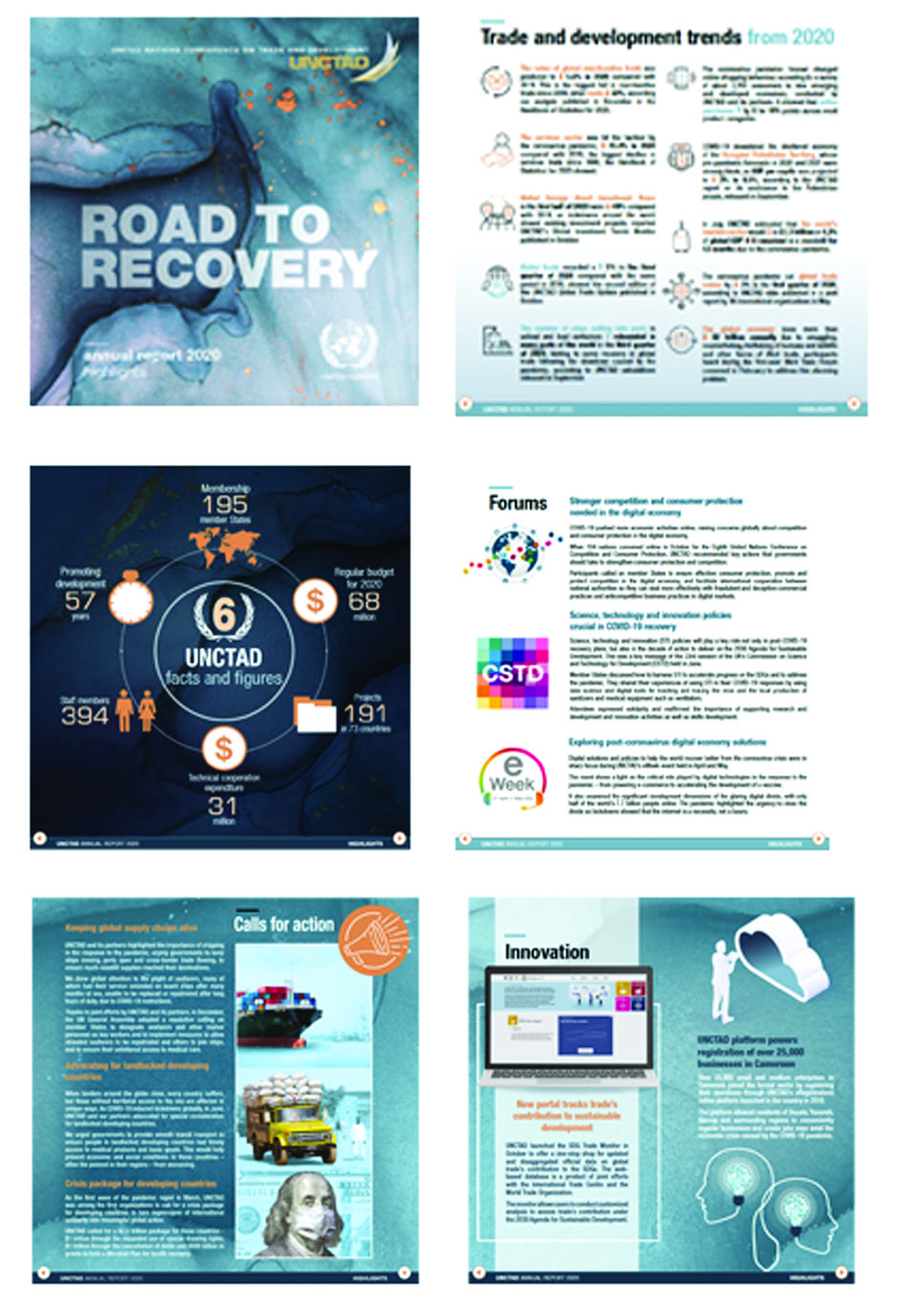 Some pages of information about the “2020 Report” of UNCTAD

UNCTAD was founded in 1964 to integrate nations into the world trading system, what we now call the “globalized economy,” and states, as if it were a simple and uncontested truth, that “Globalization, including a phenomenal expansion of trade, has helped lift millions out of poverty.” Although Archbishop Gallagher does demur to the extent of speaking about both “the advantages of globalization” as well as “its negative consequences,” would the Holy See be as welcome at these international parleys if its spokesmen were to raise any fundamental objections, or even questions, about exactly how beneficial globalization really is? If they pointed out how easily international economic transactions are manipulated by financial interests and by multinational corporations, or highlighted the frailty of intercontinental supply chains and the environmental damage they inflict, or raised doubts about the idea of “comparative advantage” or any of the other axioms of modern economists; and if instead they noted the numerous advantages of local economies and human-scale enterprises and how the principle of subsidiarity can give local farmers, artisans and small manufacturers more control over their economic destinies?

I do not condemn the Holy See’s participation in the activities of such international organizations. I am simply pointing out the dangers involved in efforts to avoid the censure of irrelevancy and sectarian retreat from the problems of the real world.

Our Lord spoke of his followers as being in, but not of, the world. Deciding when one crosses the line between them can be difficult. I close by offering a couple of suggestions for dealing successfully with this situation. One is that Catholic spokesmen, official or not, should be sufficiently familiar with the corpus of the Church’s social doctrine that they can discern what is of permanent value in it and what is simply a response to a transient phase of social or economic development; and they should not be embarrassed to bring up again and again what is of permanent validity.

Secondly, we should begin to educate our own Catholic people on the necessity of “Reconstructing the Social Order and Perfecting It Conformably to the Precepts of the Gospel” — the uncompleted, nay, never even attempted, challenge of Pope Pius. Then, indeed, can it be seen that the Catholic Church does have something real to say to mankind, mired in so many perplexities and problems, and that we stand “for a universal order in which every good and every truth of the natural or the social order can find a place.”

Thomas Storck is the author of seven books and of dozens of articles on the Catholic faith and economics.

“From inequality and vulnerability to prosperity for all”