“This Day You Will Be With Me in Paradise”

The “Second Word” of Christ on the Cross Was Spoken to the Good Thief, After He Asked, “Remember Me, O Lord, When You Come Into Your Kingdom”

And there were also two other malefactors led with him to be put to death. And when they were come to the place which is called Calvary, they crucified him there: and the robbers, one on the right hand, and the other on the left…. And there was also a superscription written over him in letters of Greek and Latin and Hebrew: THIS IS THE KING OF THE JEWS. And one of those robbers who were hanged blasphemed him, saying: “If thou be Christ, save thyself and us.” But the other answering, rebuked him, saying: “Neither dost thou fear God, seeing thou art under the same condemnation? And we indeed justly: for we receive the due reward of our deeds. But this man hath done no evil.” And he said to Jesus: “Lord, remember me when thou shalt come into thy kingdom.” And Jesus said to him: “Amen I say to thee: This day thou shalt be with me in paradise.” (Luke 23:32-43)

It has become traditional to refer to the “Seven Last Words” of Christ on the Cross.

In this meditation, we add an eighth “word,” the first words spoken by Jesus after his resurrection, to Mary Magdalen, “Touch me not.”

The traditional order of the sayings is: 1st Word: “Father, forgive them, for they know not what they do.” (Luke 23:34) 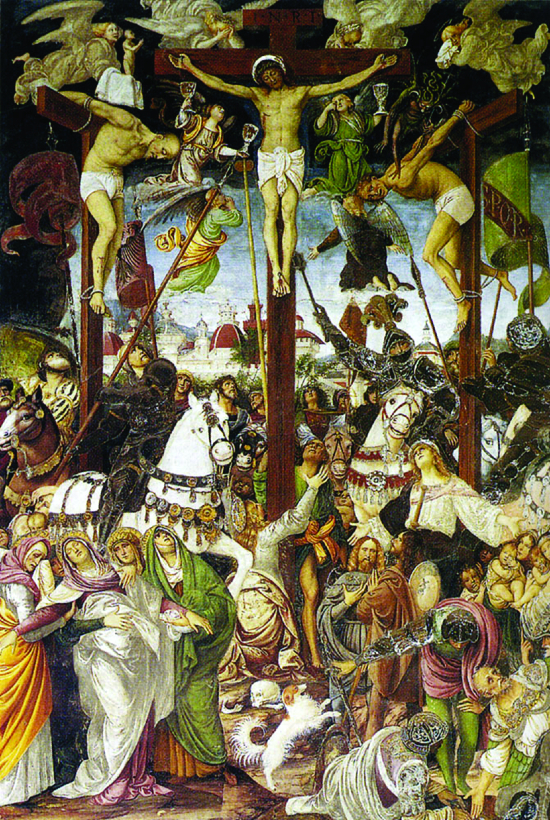 Crucifixion by Gaudenzio Ferrari, painted in 1513 in the Church of Santa Maria della Grazie, Varallo, Italy

The “Fifth Word” of Christ on the Cross: “I Thirst.” One of the Soldiers Lifted a Sponge Soaked in Vinegar to Him to Drink. After This, Jesus Spoke the “Sixth Word, ” “It is Consummated, ” and Gave Up His Spirit…

Afterwards, Jesus knowing that all things were now accomplished, that the Scripture might be fulfilled, said: “I thirst.” Now there was a vessel set there, full of vinegar. And they, putting a sponge full of vinegar about hyssop, put it to his mouth. Jesus therefore, when he had taken the vinegar, said: “It is consummated.” And bowing his head, he gave up the ghost. —John 19:28-30

The fifth word of Jesus is His only human expression of His physical suffering. Jesus is now in shock. The wounds inflicted upon him in the scourging, the crowning with thorns, losing blood on the three-hour walk through the city of Jerusalem on the Via Dolorosa to Golgotha, and the nailing upon the cross are now taking their toll. The Gospel of John first refers to thirst when Jesus meets the Samaritan woman at the well. After first asking for “a drink,” he answers the woman, “Everyone who drinks of this water will be thirsty again, but those who drink of the water that I will give them will never be thirsty. The water that I will give will become in them a spring of water gushing up to eternal life” (John 4:13-14). This passage implies there is more than physical thirst. Jesus also thirsts in a spiritual sense. He thirsts for the love of his Father, who has left him unaided during this dreadful hour to fulfill his mission all alone. And for the love and salvation of his people, the human race.

Jesus is God, therefore His Love and His Thirst are infinite. He, the Creator of the universe, asked for the love of His creatures. He has thirst for our love… These words: “I thirst”… Do they echo in our soul? 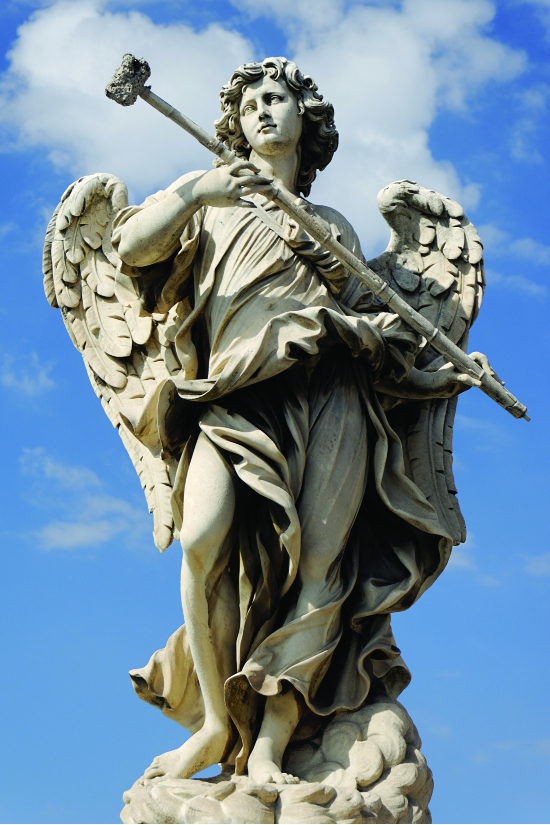 An angel by Bernini, holding one of the symbols of the Passion, on the Castel Sant’Angelo bridge

The “Eighth Word” Was the First Christ Spoke After His Resurrection, to Mary Magdalen, Who Came to the Tomb to Anoint His Dead Body…

But Mary stood weeping outside the tomb. As she wept, she bent over to look into the tomb; and she saw two angels in white, sitting where the body of Jesus had been lying, one at the head and the other at the feet. They said to her, “Woman, why are you weeping?” She said to them, “They have taken away my Lord, and I do not know where they have laid him.” When she had said this, she turned round and saw Jesus standing there, but she did not know that it was Jesus. Jesus said to her, “Woman, why are you weeping? For whom are you looking?” Supposing him to be the gardener, she said to him, “Sir, if you have carried him away, tell me where you have laid him, and I will take him away.” Jesus said to her, “Mary!” She turned and said to him in Hebrew, “Rabbouni!” (which means Teacher). Jesus said to her, “Do not hold on to me, because I have not yet ascended to the Father. But go to my brothers and say to them, ‘I am ascending to my Father and your Father, to my God and your God.’” Mary Magdalene went and announced to the disciples, “I have seen the Lord”; and she told them that he had said these things to her. (John 20:11-18)

In Jesus’ public ministry, Mary had rightly reverenced Jesus as teacher and rabbi, but Jesus the Lord is doing more now than merely leading an earthly life and fitting into earthly categories. In effect, Jesus is saying to Mary, “Don’t go on clinging to what in Me is familiar to you. Step back, take a good look, and then go tell my brothers what you see.”

When Mary Magdalene has done this, she runs to the apostles and says, “I have seen the LORD” (Jn 20:18). I show the word “LORD” in uppercase in this quote because up until this point, Mary used the word “Lord” as a title of human respect. She said, “They have taken my Lord and I don’t know where they have put Him.” No longer clinging to Him in merely a familiar way, Mary now says, “I have seen the LORD,” in a divine sense.

Remember Me In Paradise

My forgiving Savior, I am condemned justly for my sins

and deserve death. Forgive me and have mercy on me, dear Lord.

by You in Your glorious Kingdom.

—Poem by St. Teresa of Calcutta 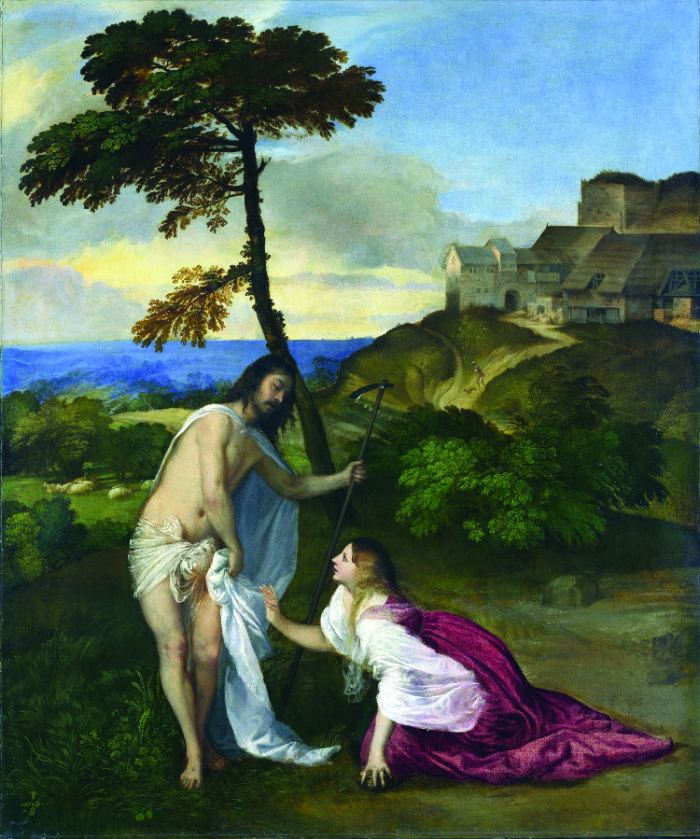