The Eternal City in a Season of Plague

The Eternal City in a Season of Plague 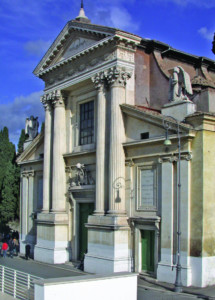 The Church of San Rocco, with a hospital attached, right by the Mausoleum of Augustus. On the right side of its facade is the inscription discussed in this essay

I think the defining characteristic of these past few months, when coronavirus debuted on the world stage, has been uncertainty. We’ve heard people talking about it as a dire global disaster, while others are saying it’s trivial and we should just proceed with business as usual. We don’t have any personal experience of the disease, so we can’t really evaluate these claims very well. Until we have experience, we are left with uncertainty. 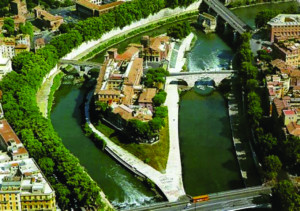 The Tiber Island got its temple of Asclepius in 293 B.C. and still has a hospital 2300 years later.

We are not the first generation to experience this. Latin has a word for a highly infectious, rapidly spreading, potentially fatal disease of uncertain nature. In fact, it has three: lues, pestis and pestilentia. They are all roughly synonymous, and are all translated into English as “plague.”

“Plague” itself comes from a Latin word, plaga, which means a “blow,” a stroke which causes injury. Hence the 10 “plagues” which precede the Exodus of the Israelites from Egypt are not all diseases – in fact only two are – but rather ten “smacks,” as it were, from the hand of God. The word “plague” hence originally carries with it the idea of intentional, cosmic retribution, whereas the Latin words for plague merely suggests sudden infectious disease. 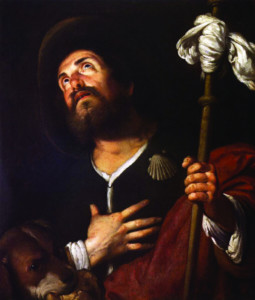 St. Roch in a painting by Bernardo Stozzi

We like certainty, and so when we think of “plague” nowadays, we think of a specific disease: the “Black Death” caused by the bacterium Yersinia pestis and transmitted by fleas, which killed perhaps as much as a third of the population of Europe in the mid-14th century, including St. Roch of Montpellier, who became the patron saint of its sufferers. But the Latin word pestis is much broader than that. The “Antonine Plague” which struck the Roman Empire at the time of Marcus Aurelius is thought to have been measles; the “Plague of St. Cyprian” 70 years later may have been smallpox. Coronavirus, which has already infected more than 10,000 people in Italy and killed 600 of them, would fit under the Latin term pestis.

Rome is a marvelous place, and its very buildings hold the memories we all forget. None of us have any experience of a highly infectious, rapidly spreading, potentially fatal disease of uncertain nature. These things don’t happen very often. But memories of them are scattered all over Rome. The Tiber Island got its temple of Asclepius – and its boat-shape – in 293 B.C., when a plague motivated the Romans to bring over the cult of the Greek healing-god Asclepius. The island still has a hospital on it 2,300 years later. Apollo was considered the god of plague, cutting down people with his arrows, and it was long believed that theVatican’s celebrated Apollo Belvedere, one of the most beautiful statues in Rome, was commissioned to ward off a plague in Athens in the fifth century. The statue is later than that date, but any statue of Apollo you see in Rome may well have seen incense and prayers in time of plague.

Castel Sant’Angelo, the papalfortress, is named for a vision of St. Gregory the Great during a plague: he saw the angel of God sheathing his sword, which marked the end of the outbreak. Less than a century later, St. Sebastian, of the beautiful body and many arrows (much like Apollo), was called on to defend the city from plague. His relics were brought to San Pietro in Vincoli during the Plague of 680, at which time a mosaic of St. Sebastian as an old man – a most unusual depiction – was attached to the wall in the church, where it still remains. I like to think of St. Sebastian in this manifestation as being the saint who can help you live to a ripe old age.

After the Black Death St. Roch became the saint of choice when it came to plague, and San Rocco received his own church with a hospital attached, right by the Mausoleum of Augustus. Its facade, which I walked by often when living in the area, seemed outdated until very recently, but it seems fresh and relevant again:

“Glorious Roch [the last two words], so dire plague may not touch our mortal bodies, and so crimes may not spoil our immortal souls, act [age] on our behalf with your prayers.” This is fabulous ecclesiastical Latin, every bit as good as Cicero – the adjective dira goes with pestis two lines down, the mortal bodies balanced by immortal souls, etc. – and it balances nicely our desires for worldly goods like health with more spiritual concerns.

One summer, during Paideia’s Living Latin in Rome program, we visited Augustus’ Ara Pacis, which now stands right next to San Rocco. The students sang Horace’s Carmen Saeculare, a hymn to the gods of Rome commissioned by Augustus as part of the same effort at social restoration that inspired the Ara Pacis. It specifically asks that Apollo keep his plague-arrow buried – telo condito in the Latin – and that the gods give “upright morals” (probos mores) to the Roman people. The correspondence with the inscription on San Rocco, which we had just read, could not have been clearer. This is Rome, this continuity through the ages, this memory of things we have never even experienced. It gives me faith and hope that we will make it through this, as generations have before us. It’s an antidote to all the anxiety of uncertainty.