The 4-day journey to Iraq took Francis to six cities and sites In the north and south of the country. He comforted Christians harshly tried by sectarian violence, and appealed for tolerance, fraternity, and peace 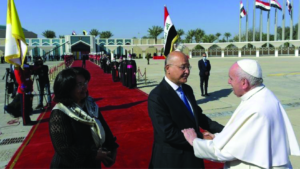 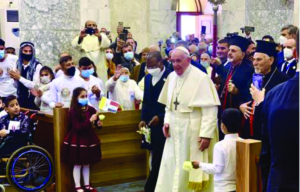 Pope Francis on March 8 left Iraq, bringing the curtain down on the 33rd apostolic journey of his pontificate, and the first visit of a pontiff to the Middle Eastern country.  The 4-day visit, which began March 5, was the Pope’s first in over 15 months, because of the Covid-19 pandemic. Pope Francis made Bagh dad his base from which he flew to Najaf, Ur, Erbil, Mosul and Qaraqosh.

In the spirit of the motto of the apostolic journey — “You are all brothers” — from Matthew’s Gospel, the 84-year-old Pope encouraged Iraqis on this path, saying that only when they learn to look beyond their differences and see each other as members of the same human family will they be able to begin an effective process of rebuilding the country. Thus, they will leave future generations a better, more just and more humane world.

The Pope’s visit has a great significance not only for Iraq but also for the entire Middle East region, especially for Syria. In the footsteps of Christ, the Good Shepherd, the heart of the pastor of the Universal Church went out to seek his sheep, bruised and battered by sectarian strife and terrorism. Caressing them, he assured them they are not forgotten.

Sunday, the third day, was the most touching of the four days, the Pope flying

north to visit Erbil, Mosul and Qaraqosh. Listening to the Muslims and Christians of the ruined city of Mosul, about the brutality they faced under the terror of the Islamic State (IS), Pope Francis blessed their resolve to rise from the ashes, joining hands together. “Fraternity is more durable than fratricide, hope is more powerful than hatred, peace more powerful than war,” the Pope assured them during prayers for the dead.

Iraq’s Christian community, one of the oldest in the world, has been particularly devastated by the years of conflict, falling to about 300,000 from about 1.5 million before the U.S. invasion in 2003. Taking advantage of the chaos that followed, the IS militants overran northern Iraq in 2014 in a bid to establish a caliphate in the region. They carried out their brutal onslaught against Christians, minorities and even Muslims who opposed them. Much of the old city of Mosul was destroyed in 2017 during the bloody battle by Iraqi forces and an international military coalition to drive out the terrorists.

In Mosul, the Holy Father was visibly moved to see the extensive destruction all around him with the wrecked shells of churches, homes and buildings amid the debris.

In Qaraqosh, a Christian stronghold that was overrun by IS fighters, the Pope visited the Church of the Immaculate Conception, whose courtyard was used by the militants as a firing range for practice. He urged the local Christian community to rebuild their communities based on forgiveness and fraternity.

Before returning to Baghdad on Sunday, the Holy Father celebrated an evening Mass for some 10,000 people in the stadium of Erbil. At the end of the Eucharistic celebration, which was the last public event of his Iraqi trip, Pope Francis bade farewell to the nation. “Iraq will always remain with me, in my heart,” he said. During his time among them, he said, he “heard voices of sorrow and loss, but also voices of hope and consolation.”

“I pray that the members of the various religious communities, together with all men and women of goodwill, may work together to forge bonds of fraternity and solidarity in the service of the good and of peace.” He concluded by exclaiming, “Salam, salam, salam,” meaning “Peace, peace, peace” in Arabic.