This Christmas, Children and Health

This Christmas, Children and Health

Because the human body is a kind of temple — the dwelling place of the Spirit of God — we must treat it with profound respect, reverence and piety. And this is especially the case with regard to children. A reflection…

“And, lo, the angel of the Lord came upon them… And the angel said unto them, ‘Fear not… For unto you is born this day in the city of David a Savior… And suddenly there was with the angel a multitude of the heavenly host praising God, and saying, ‘Glory to God in the highest, and on earth peace.’”

“I realize that it may be extremely unpopular to take a position against the so-called vaccines, but as Shepherds of the flock of the Lord we have the duty to denounce the horrible crime that is being carried out.” —Archbishop Carlo Maria Viganò, 80, in an open letter to the bishops of the United States issued October 23, after US President Joseph Biden announced he would soon mandate the vaccination of 28 million American children between the ages of 5 and 11. Viganò, noting that the testing of the vaccines has not yet been completed, and that some side-effects have been noted, argued that this plan should be postponed until the testing is complete

October 27, 2021 — A world of peace. This is what we long for as Christmas approaches each year, and also this year.

As we draw near to Christmas, we are reminded that our world changed with the birth of a child. And we are also reminded that this very fact led Christians to have a particular care and love for all children. Christ condescended to exchange His divinity for our humanity so that we might exchange our fallen humanity for His divinity. And this began in Bethlehem, when He was born. This central fact of the Christian faith has had its significance for our thinking about human life. It is the deepest source for what we call our “pro-life” position. We are “pro-life” because each human life is sacred, precious, unique… because each human child is similar to the Child Jesus.

Christian culture has done a great deal to try to make the life of children safe and secure. One example is the Christmas tradition of gift-giving — the magic of presents on Christmas morning, giving children a sense that the world is, or can be, a place of joy, of giving and receiving gifts. Yet, despite all of this emphasis in the Christian tradition on gift-giving, on loving and valuing and protecting children, our culture in recent years has been marked by terrible forms of harm against children, of abuse of children, of lack of love for children.

On this particular Christmas 2021, as we rejoice in the birth of the Savior, we must also lament and mourn the many ways in which our society abandons children, abuses children, kills children… not in the body alone, but often also in the spirit, in the soul. A society that does not treat its children as the most precious gift that is given, to be nourished, educated, protected, trained up in the faith, is a poor society, to be pitied, and to be reformed, to be changed, to be made once again able to receive children, to love children, and to hand on to children that faith that is the most precious thing we have to offer to them.

In this context, I was struck a few days ago when US President Joseph Biden issued a statement saying that he planned to mandate the vaccination of 28 million children between the ages of 5 and 11 in coming weeks, though almost no children have been susceptible to the Covid virus, and if infected, they have generally managed to fight off the virus with their own God-given immune systems. The virus, according to the actual data, has been dangerous for older people, not for children.

Moreover, the testing of the various vaccines has not been completed. Science does not yet know, and cannot know for another year or two, whether the vaccines may have any serious side effects.

Yet very few voices were raised publicly to protest against this plan. In the universal Church, the single voice that was raised most loudly and publicly came from Archbishop Carlo Maria Viganò, who issued an open letter on October 23 addressed to Archbishop José Horacio Gómez of Los Angeles, President of the United States Conference of Catholic Bishops, and to all of the Archbishops and Bishops of the Dioceses of the United States, and also, “for their competence,” to Cardinal Luis Ladaria Ferrer, S.J., Prefect of the Congregation for the Doctrine of the Faith, and to Cardinal Gerhard Müller, Prefect emeritus of the Congregation for the Doctrine of the Faith.

“I address to you, Archbishop Gómez,” Viganò began, “some serious considerations related to the so-called vaccines against Covid-19.” He continued: “The safety and effectiveness of individual vaccines is determined after a period of experimentation that normally lasts for several years. In this case, the health authorities have decided to carry out experimentation on the entire world population, as an exception to the usual practice of the scientific community…” And, citing studies largely ignored by the mainstream media, Viganò writes that there have already been negative side effects: “Worldwide, the number of deaths and grave pathologies following vaccination is increasing exponentially,” he writes. “In only nine months, these vaccines have caused more deaths than all vaccines in the last 30 years… In many nations — such as Israel for example — the number of deaths after vaccination is now greater than the number of deaths from Covid…” The archbishop concludes: “How Joe Biden… could impose vaccination on 28 million children aged 5 to 11, is absolutely inconceivable, if only for the fact that there is practically zero risk of them developing the SARS-CoV-2 disease. The Holy See and the Bishops’ Conferences have the duty to express a firm condemnation in this regard, and also in relation to the very serious side effects that can result for children who are inoculated with the experimental gene serum.” He adds: “It is equally imperative that there be an intervention by the US Bishops’ Conference aimed at promoting the religious exemption and immediately revoking the bans imposed in this regard by many Ordinaries on their (unvaccinated) priests.”

These vaccines are not yet fully tested. Since serious side effects are already being observed, it seems wise for political, medical and religious leaders to protect our children, and not mandate something that might harm them. Such prudence and restraint might be a beautiful Christmas gift this year to give to many children around the world. 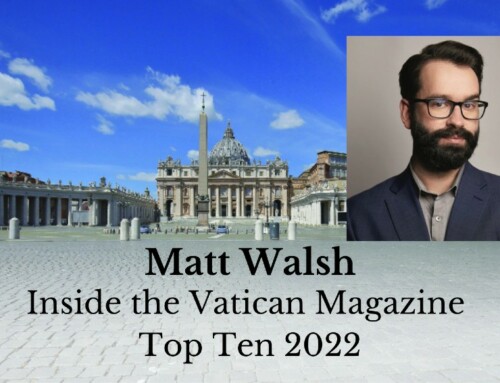