The Vatican Museums opened an exhibit of recently restored paintings of the Virgin Mary by early Renaissance painter Carlo Crivelli.

The U.S. Embassy to the Holy See co-hosted the exhibition opening at the Vatican Museums in celebration of the 35 years of formal diplomatic relations between the U.S. and the Holy See. 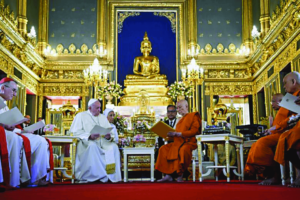 In his first official speech in Thailand, Pope Francis encouraged the Thai authorities, civil society, and diplomatic corps to strive after unity, even while preserving the diversity which gives their country “soul.”

“As a multi-ethnic and diverse nation, Thailand has long known the importance of building harmony and peaceful coexistence between its numerous ethnic groups, while showing respect and appreciation for different cultures, religious groups, thoughts and ideas,” he said November 21.

Pope Francis spoke in the Inner Santi Maitri Hall of the Government House on his second day in Bangkok, Thailand, part of a six-day trip which also included Japan. 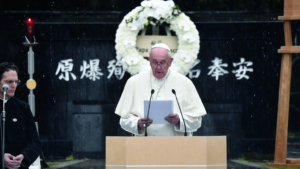 On November 24, Pope Francis offered prayer after laying a wreath at the Atomic Bomb Hypocenter Park in Nagasaki, Japan.

Pope Francis honored the many martyrs who died in Japan during two centuries of persecution, encouraging Catholics in the country to use their heroic witness as inspiration to spread the Gospel.

“May we never forget their heroic sacrifice!” he said November 24, speaking of the hundreds of martyrs who “consecrated the ground by their suffering and death.”

The Pope spoke at the memorial of Nishizaka Hill in Nagasaki, where hundreds of Christians from the end of the 16th through the 18th century lost their lives for the faith, including St. Paul Miki and his 25 companions, who were crucified on the hill in 1597.

Marking the feast of St. Andrew the Apostle, Pope Francis sent a message to Patriarch Bartholomew of Constantinople voicing his desire for full communion between the Catholic and Orthodox Churches.

“It is with great spiritual joy and in profound communion of faith and charity that I join the prayer of the Church of Constantinople in celebrating the feast of its holy patron, the Apostle Andrew, the First-called and brother of the Apostle Peter,” the Pope said in his letter.

The publication date of the new constitution governing the Roman Curia was delayed again as Pope Francis’ Council of Cardinals continued to evaluate suggestions to the draft that was given to bishops’ conferences in May.

The now six-member advisory council met at the Vatican December 2-4.

According to a brief Vatican press release December 4, the group of cardinals had continued to receive suggestions on the text of the new apostolic constitution, provisionally titled Praedicate Evangelium, until a few days before the start of the latest round of meetings.

The Council of Cardinals will continue its “reading and evaluation” of the draft at its next meeting, which will take place in February 2020, the Holy See press office stated. The new document is expected to place renewed emphasis on evangelization as the structural priority of the Church’s mission, with some predicting the merger of the Vatican’s Congregation for the Evangelization of Peoples and the Pontifical Council for the Promotion of the New Evangelization into a single larger department.

Despite growing recognition of “climate change” as a legitimate and looming threat, current commitments to mitigate its effects and alter human behavior fall short of those needed to resolve the crisis in time, Pope Francis said.

“We must admit that this awareness is still rather weak, unable to respond adequately to that strong sense of urgency for rapid action called for by the scientific data at our disposal,” the Pope said in a message to the U.N. Climate Change Conference, COP25.

The conference was held in Madrid December 2-13, and the Vatican released a copy of the Pope’s message December 4.

The conference aimed to take crucial steps in the U.N. climate change process and to identify effective strategies for implementing the Paris Agreement, a framework of action against climate change adopted by the U.N. December 12, 2015.

However, studies by the Intergovernmental Panel on Climate Change “demonstrate how far

words are from concrete actions,” the Pope said.

According to the intergovernmental panel, global temperatures and emissions continue to rise and humanity is not on course to fulfill the goals of the Paris Agreement by 2020.

Members of a Vatican special committee met with the Secretary General of the United Nations on December 4 to deliver a petition on human fraternity co-authored by Pope Francis and the Sunni Islamic Grand Imam of Al-Azhar, Ahmed Al-Tayeb.

The committee was formed in August, under the auspices of the Pontifical Council for Interreligious Dialogue. The message from the two religious leaders requested that February 4 be declared the “World Day of Human Fraternity,” and asked the United Nations, along with the Holy See and the Al-Azhar Mosque, to create a “World Summit On Human Fraternity.” The Al-Azhar Mosque is located in Cairo, Egypt, and being the Grand Imam of that mosque is considered one of the highest positions in Sunni Islam.

According to a statement released by the Pontifical Council on December 5, Dr. Antonio Guterres, the secretary general of the United Nations, “expressed his appreciation and availability for the initiative,” and said that he believed it was important to work “at the service of all humanity.” 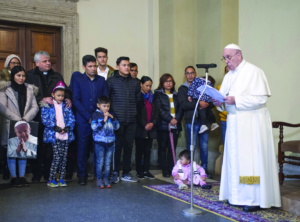 On December 5, the Holy See welcomed 33 refugees to Italy as they arrived from the Greek island of Lesbos with papal almoner Cardinal Konrad Krajewski. Another 10 refugees came later in December.

The asylum seekers are from Afghanistan, Togo, and Cameroon.

The humanitarian corridor was organized at the request of Pope Francis, who in May asked the papal almoner to show the Holy See’s solidarity with refugees by supporting some young people and families fleeing conflict in their countries, helping them to seek asylum in Italy.

After months of negotiation between the Office of Papal Charities and the Italian Ministry of the Interior, permission was granted to bring the group of migrants to Italy to apply for asylum, according to a statement from the Holy See charity office.

Pope Francis praised the courage of the Ruthenian Eparchy of Mukachevo, which emerged from hiding 30 years ago after persecution in Soviet Ukraine.

Pilgrims from the eparchy met with the Pope in St. Peter’s Basilica December 11 in celebration of the anniversary.

“I am happy to welcome you to the tomb of St. Peter, and together with you, I wish to thank the infinitely good Lord who with His powerful hand freed your Church from the long oppression of the Soviet regime,” Pope Francis said in their meeting.

During the decades of Soviet suppression of the Byzantine rite Catholic Churches in Ukraine, 128 priests, bishops, and nuns were put in prisons or sent into exile in Siberia. The eparchy of Mukachevo had 36 priests martyred during the persecution.

The Vatican’s Pontifical Academy for Life held an international symposium this week on medical ethics and palliative care, hosted together with the WISH initiative, a part of the Qatar Foundation.

The December 11-12 conference included presentations by representatives of Christianity, Islam, and Judaism on the topic of medical ethics, palliative care, and the mental health of the elderly.

In a press conference before the event, Archbishop Vincenzo Paglia, president of the Pontifical Academy for Life, discussed the importance of palliative care, which focuses on alleviating suffering and improving quality of life.

This care may be offered in end-of-life situations or at any stage of an illness.

It may be offered on its own, or in conjunction with efforts to treat or cure a disease or medical condition.

Paglia said that promotion of palliative care is an area where all religions can work together.

He said the symposium is part of a series of events being put on by the Pontifical Academy for Life which are focused on promoting “a culture of care in contrast to the culture of waste.”