Pope Francis celebrated his first Christmas as Pope, and pleaded for world peace on New Year’s Day. He also invited Pope Benedict to join him for lunch in the Domus Sanctae Marthae.

Peace was on Pope Francis’ heart on New Year’s Day. The “heart of humanity” seems to have “gone astray” and too many people are indifferent to war, violence and injustice, Francis said in his New Year’s address to the world. 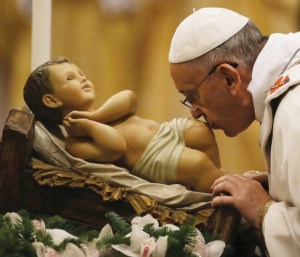 Pope Francis places the statue of Baby Jesus in the manger during Christmas Eve Mass in St. Peter’s Basilica on December 24 (Galazka photo).

The pontiff spent a quiet Christmas in the Domus Sanctae Marthae, his first as Pope, in the company of his personal secretaries and just a few guests. The high moment came on December 27, when Emeritus Pope Benedict came to the Domus for lunch. Benedict arrived a few minutes after 1 p.m. Pope Francis greeted him warmly and the two men walked through the lobby of the Domus to the chapel, where they prayed together briefly, then entered the refectory for a Christmas season meal — the first time Benedict has visited Francis since the former stepped down from the papacy.

On Christmas Eve, at a Vigil Mass at the main altar in St. Peter’s Basilica, Francis celebrated the “holy exchange” in which God, in Christ, gave humanity the gift of His divine nature, and humanity, in turn, through the Virgin Mary, gives to God the gift of human nature. The Sistine Chapel choir filled the enormous basilica with splendid, moving Latin hymns.

Francis spoke from the window of the Apostolic Palace overlooking St. Peter’s Square — the window Popes traditionally use for their addresses. But, unlike his predecessors, Francis has not used the Renaissance apartment behind the window since his election in March, preferring instead to live in small quarters in the Vatican guest house. He said he hoped a “cry for peace” would encourage dialogue and “tear down walls that prevent enemies from seeing each other as brothers.” Among places ravaged by conflict, Francis singled out Syria, South Sudan, the Central African Republic, Nigeria and Iraq. He also prayed for fruitful peace talks between Israelis and Palestinians.

The Pope then made an unscheduled visit to the church of Santa Maria Maggiore in Rome, where he prayed in front of a famous icon of the Virgin Mary. It was the same church that he visited on the first morning after his election on March 13, 2013.

In a message sent to world leaders last month for the World Day of Peace, the Pope urged nations to narrow the gap between rich and poor, and to get closer to the poor and afflicted.