Zen Not Backing Down

Zen Not Backing Down 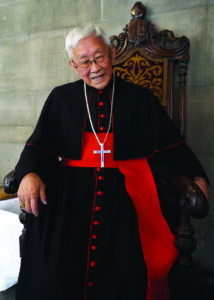 As the situation for Catholics in China continues to deteriorate in the wake of a September 22, 2018 Vatican-China accord, Cardinal Joseph Zen, archbishop emeritus of Hong Kong, continues to sound the alarm for anyone willing to listen — but Vatican officials are turning a deaf ear.

As the first anniversary of the accord signed by the Vatican and the Communist Chinese government approached last fall, Cardinal Zen sent a letter to all his brother cardinals on September 17, 2019, reiterating his objections.

The agreement included Vatican recognition of seven state-appointed bishops, as well as a plan for future bishops to be chosen by local Catholic communities together with authorities, and then approved by the Pope.

The Vatican also issued “Pastoral Guidance” in 2019 for Catholic clergy being pressured to join the government-run Chinese Patriotic Catholic Association (CPCA), which calls itself “independent.” In an effort to relieve any crisis of conscience, the guidelines provide for a declaration in writing, or at least orally, denying any repudiation of one’s Catholic faith or identity.

Despite the guidelines, many refuse to join, even at the peril of their personal well-being.

This is the situation into which Cardinal Zen has entered, with not only his unique experience with exiles in his flock who fled religious persecution on the mainland, but also his willingness to engage the power structures at the Vatican.

After telling CNA in a February 11 interview that “the situation is very bad” in China, and criticizing Cardinal Pietro Parolin, Vatican Secretary of State, who engineered the accord, another cardinal, Giovanni Battista Re, recently-appointed Dean of the College of Cardinals, sent all the members of the College a February 26 letter in which he took Cardinal Zen to task.

Re claimed that the accord, thus far secret, is consistent with a draft approved by Pope Benedict XVI of the agreement signed ultimately in 2018.

On March 1, Cardinal Zen responded by asking that Re “show me the text of the agreement, which I have been barred from seeing up to this point” and explain “why it was not signed at that time.”

Then on March 10, Cardinal Zen issued a “Supplement to My Answer to Cardinal G.B. Re,” in which he said, “The most serious problem is not the secret Agreement of September 2018… The Pastoral Guidance of 28 June [2019] is more blatantly evil, immoral, because it legitimizes a schismatic Church!

“There is much confusion and contradiction in that document.

“(a) Here and elsewhere, Parolin has repeatedly affirmed that the word ‘independent should today no more be understood as ‘absolutely independent,’ because in the Agreement the Pope is recognized as the Head of the Catholic Church (I cannot believe this, until they show me the Chinese text of the agreement).

“Then, if we take the words of Parolin, he should see nothing wrong in signing a document where you promise to join an independent Church.

“(b) but contradicting himself he sees something wrong in doing so, and so he says: you must, at the same time, make some protest (written or verbal, with or without a witness!?).

“How do you reconcile the signing of a document and the protesting that you don’t mean what you sign?”

Chinese Goal: To “Sever Ties” Between Chinese Catholics And Rome

A priest from the Diocese of Mindong told Bitter Winter that the central government is conducting a systematic campaign against Catholic conscientious objectors. According to him, the first step is to summon all Catholic clergy members for talks, indoctrination, and transformation, forcing them to sign applications to join the CPCA.

Taking the hierarchy of the Catholic Church as a model, the CCP will then establish a similar system of management: congregation members – priests – bishops – the leadership of the Bishops’ Conference – CPCA – the Central Committee of the CCP (Chinese Communist Party).

“Gradually, the regime will be able to completely sever the ties of the Catholic churches in China from their counterparts overseas, Vatican and the Pope in particular,” the priest said. (BitterWinter.org is a website devoted to religious freedom and human rights in China).