A Mass that Concerns the Pope

A Mass that Concerns the Pope

With a letter written personally to Cardinal William J. Levada, Benedict XVI has ordered the Congregation for the Doctrine of the Faith to examine whether the Neocatechumenal Masses are or are not in keeping with the liturgical teaching and practice of the Catholic Church.

A “problem,” in the Pope’s judgment, that is “of great urgency” for the whole Church. Benedict XVI has been alarmed for some time about the particular ways in which the communities of the Neocatechumenal Way celebrate their Masses, on Saturday evening, in separate locations.

His sense of alarm was increased by the plot woven behind his back in the curia last winter. What had happened was that the Pontifical Council for the Laity, headed by Cardinal Stanislaw Rylko, had prepared the text for a degree of blanket approval of all the liturgical and extra-liturgical celebrations of the Neocatechumenal Way, to be made public January 20 on the occasion of a meeting scheduled between the Pope and the Way.

The decree was redacted according to the guidelines of the Congregation for Divine Worship, headed by Cardinal Antonio Cañ­izares Llovera. The founders and leaders of the Way, Francisco “Kiko” Argüello and Carmen Hernández, were told about it and joyfully told their followers about the imminent approval — all unbeknownst to the Pope.

Benedict XVI found out about the text of the decree a few days before the meeting on January 20. He found it illogical and mistaken. He ordered that it be scrapped and rewritten according to his guidelines.

In fact, the decree that was made public on January 20 limited itself to approving the extra-liturgical ceremonies that mark the catechetical stages of the Way.

In his speech, the Pope stressed that only these had been authorized. With regard to the Mass, he gave the Neocatechumenals a genuine lecture — almost an ultimatum — on how to celebrate it in full fidelity to the liturgical norms and in practical communion with the Church.

During those same days, Benedict XVI received in audience the archbishop of Berlin, Rainer Maria Woelki, a trusted confrere whom he would soon make a cardinal. Among other things, Woelki talked to him about the difficulties that the Neocatechumenals were creating in his diocese with their separate Masses on Saturday evenings, officiated by about 30 member priests.

The Pope asked Woelki to give him a survey of the matter in writing. On January 31, Woelki sent him a letter with more detailed information. A few days later, on February 11, the Pope forwarded a copy of this letter to the Congregation for the Doctrine of the Faith, together with a request to examine as soon as possible this question that “concerns not only the archdiocese of Berlin.”

The examining commission headed by the doctrinal congregation would have to include, according to the Pope’s guidelines, two other Vatican dicasteries: the Congregation for Divine Worship and the Discipline of the Sacraments, and the Pontifical Council for the Laity. 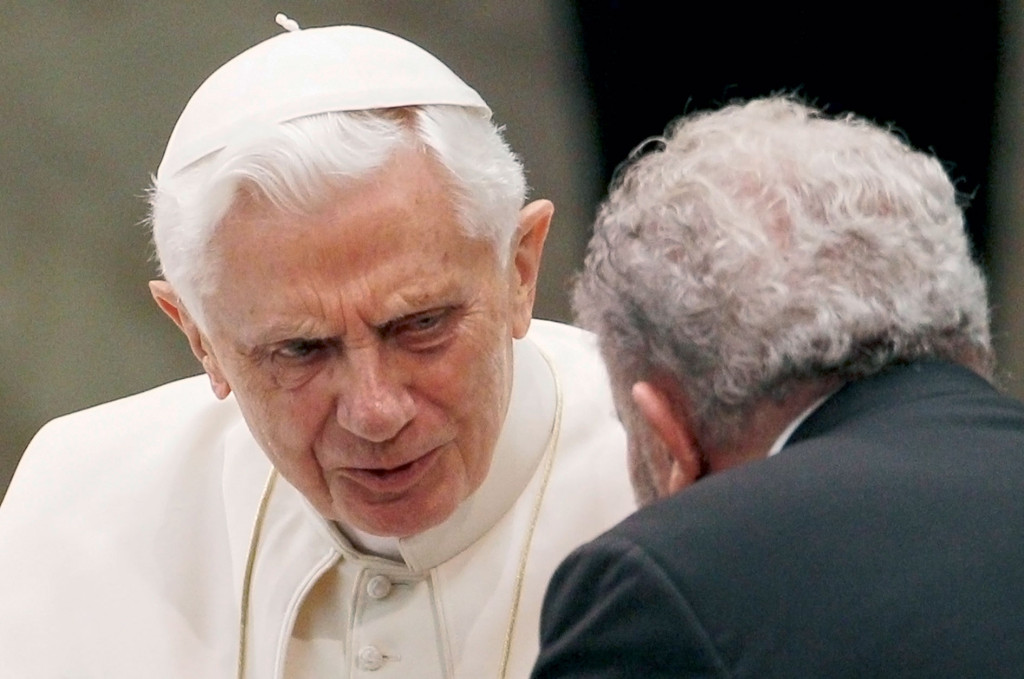 Benedict XVI greets Kiko Argüello, co-founder of the Neocatechumenal Way, during an audience with Neocatechumenal members in Paul VI Hall at the Vatican on January 20 (CNS photo)

And so it was. On March 26, in the Palazzo del Sant’Uffizio, under the presidency of the secretary of the Congregation for the Doctrine of the Faith, Archbishop Luis Francisco Ladaria Ferrer, a Jesuit, a meeting for an initial examination of the question was held with the secretaries of the other two dicasteries — for Divine Worship, Archbishop Augustine J. Di Noia, a Dominican, and for the Laity, Bishop Josef Clemens — and with four experts designated by them. An absent fifth expert, Father Cassian Folsom, prior of the monastery of Saint Benedict in Norcia, sent his assessment in writing.

All of the judgments expressed were critical of the Masses of the Neocatechumenals. Also very severe was the one that the Congregation for the Doctrine of the Faith had asked, before the meeting, of the theologian and newly-created Cardinal Karl J. Becker, Jesuit, professor emeritus at the Pontifical Gregorian University and an adviser to the dicastery.

The dossier provided for the meeting by the doctrinal congregation included the Pope’s letter of February 11, Cardinal Woelki’s letter to the Pope in the original German and in English, the assessment of Cardinal Becker, and a guide for the discussion that explicitly brought into question the conformity to the liturgical teaching and practice of the Catholic Church of article 13 § 2 of the statutes of the Neocatechumenals, the one in which they justify their separate Masses on Saturday evening.

The danger feared by Benedict XVI and by many bishops — as demonstrated by the many complaints that have been made to the Vatican — is that the particular ways in which the Neocatechumenal communities all over the world celebrate their Masses may introduce into the Latin liturgy a new de facto “rite” artificially composed by the founders of the Way, foreign to liturgical tradition, full of doctrinal ambiguities and a source of division in the community of the faithful.

To the commission he had set up, the Pope entrusted the task of verifying the validity of these fears, in view of decisions to be made.

The judgments of the commission were to be examined in a plenary meeting of the doctrinal congregation in the second half of April.