“In the face of a galloping de-Christianization in the West, the new evangelization, as Pope Francis underlines, must be clearly grounded in Christ crucified who alone can overcome the world for the sake of its salvation.” —Raymond Cardinal Burke, February 21 article in Rome 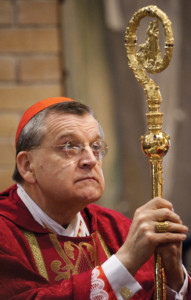 “Pope Francis has clearly reaffirmed the Church’s moral teaching, in accord with her unbroken tradition. What, then, does he want us to understand about his pastoral approach in general? It seems to me that he first wishes to have people set aside every obstacle which they imagine to prevent them from responding with faith. He wants, above all, that they see Christ and receive His personal invitation to be one with Him in the Church. The Holy Father, it seems to me, wishes to pare back every conceivable obstacle people may have invented to prevent themselves from responding to Jesus Christ’s universal call to holiness.” —Cardinal Raymond Burke, in his February 21 essay in L’Osservatore Romano (published here in its entirety)

“Surely, persons whose hearts are hardened against the truth will read something very different into the approach of Pope Francis, claiming that, in fact, he intends to abandon certain teachings of the Church which our totally secularized culture rejects. Their false praise of the Holy Father’s approach mocks the fact that he is the Successor of St. Peter, totally grounded in the Beatitudes, and that, therefore, with humble trust in God alone, he rejects the acceptance and praise of the world.” —Cardinal Burke, in the same essay

One of the persistent, misinformed and often undermining narratives which have filled the media — both secular and religious — since the beginning of the pontificate of Francis has been the one which pits Pope Francis, cast as the alleged “liberal reformer” against bishops like Cardinal Raymond Burke, cast as the “conservative traditionalist.”

It has differing versions. It is inaccurate. It is doing a disservice to the Church and her mission.

There are various agenda driven secularist versions of the narrative. They purport that, with the advent of the Franciscan papacy, the unchangeable teaching of the Catholic Church concerning the truth about the nature and ends of marriage or the absolute inviolable dignity of every human life, will somehow succumb to their notion of progressivism. That perceived notion of progressivism is, in reality, a regressive rejection of the true progress which the Christian vision brought to the world. It calls for a return to some practices which are pre-Christian and pagan and will most certainly not bring progress.

There are some “religious” versions of this narrative as well. Some are being perpetuated in Catholic circles, often among Catholics who self-identify as more “traditionalist.” Some of these dear Catholics, though certainly not most, seem to see themselves as more “enlightened” than many of the rest of us. Some from among this small number even include the successor of Peter, Pope Francis, in their assessment. Though, few will ever come out and directly say so.

They insinuate that people like Raymond Cardinal Burke are being subtly persecuted from within the new Franciscan papal circles — and somehow cast aside.

That narrative continues, even though the cardinal continues to serve as the Prefect of the Sacred Tribunal of the Apostolic Signatura and the President of the Advisory Board of the Dignitatis Humanae Institute. It is incorrect and increasingly problematic.

There is room within the embrace of the Catholic Church for legitimate diversity within ortho-doxy (right doctrine) and ortho-praxy (right practice). In fact, there always has been.

The preoccupation of some, though certainly not all, within certain segments of the traditionalist community within the Church with this incorrect narrative is not bearing good fruit. It is also inaccurate.  Below, I offer to our readers around the globe an outstanding article which Cardinal Burke wrote for L’Osservatore Romano, the official Vatican newspaper. I do so with the sincere prayer and reasoned hope that this wonderful affirmation by Cardinal Burke of Pope Francis will help to shatter the silly narrative, at least in some Catholic circles.