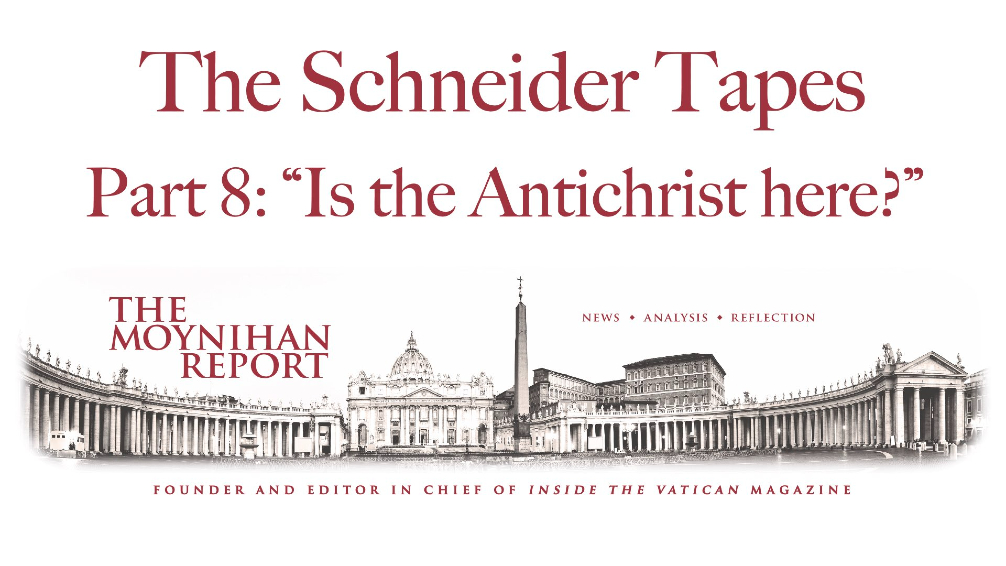 We have posted the 8th of 10 tapes from my late October interview with Bishop Athanasius Schneider, 60, of Astana, Kazakhstan, and it is now available on Rumble (link) and YouTube (link).

In this tape, Schneider discusses the signs of the times, and expresses his hope that there may yet be a “time of peace.”

Click the video below for the 8th part of the interview.

In which Bishop Schneider speaks about a coming time of peace.

Robert Moynihan: Many people, nevertheless, are quite concerned about the global situation, about looming restrictions, totalitarianism. In Italy, there have been dock workers in Trieste striking against the requirement to receive the vaccination. There are many people who feel these times are so confused, and so dangerous, that they speak about the end of the world. And you said, in Christus Vincit, “In his inaugural encyclical E Supremi, St. Pius X” — so he was Pope in the first years of the 1900s, so 110, 120 years ago — “he remarked that, so serious was the gathering storm of error at the beginning of the 20th century — relativism, modernism — that he would not be surprised to hear that the Antichrist was already on this earth.” Where do you think we are, more than 100 years later? Do you believe the Antichrist is here?

Bishop Athanasius Schneider: Well, we are stating evermore the phenomenon which Pope Pius X described over one hundred years ago are increased evermore, the relativism, the fight against God, against his laws. And so, the signs of the end times are more clear now in our time.

We have to be always vigilant and ready for the coming of the Lord. And, even though we can observe really signs of a kind of pre-annunciation of some clear signs of the end times, nevertheless, we don’t know how long this can last, and we don’t know if God will concede to humanity and the Church again a time of true flourishing, spiritual renewal.

Or, as Our Lady of Fatima said, “At the end,” — at the end, maybe at the end times — “my Immaculate Heart will triumph.”

It could be that this time of a new renewal and the true splendour of the Church and a peaceful and life of the civil society and dignity will be granted by God because Our Lady of Fatima said that the Pope should consecrate Russia to “my Immaculate Heart.”

Moynihan: I was just going to ask you…

Bishop Schneider: Yes, and then she added, “and Russia will convert, but after the consecration.” So we have to follow her words. So the exact sense of the words. The consecration to Russia. Then she speaks about the conversion of Russia.

(End, Transcript, Tape #8; to be continued… Tape #9, which contains an interesting declaration by the bishop, will be posted at 12 noon on Monday, November 29, 2021)

Special note: This coming Tuesday, November 30, is a day designated in the United States and increasingly worldwide, as “Giving Tuesday,” a day when people may contributions to the work of all sorts of non-profit initiatives (link). We will mention this again on Monday, but if you want to be sure not to overlook this opportunity to support our work, these letters, and our writing in general, you could, if you would like, make a modest donation now, at this link (which is still the same link that we posted last year, in 2020; or go here), and we will count all donations from today on as “Giving Tuesday” 2021 donations, and send you back a note of heartfelt thanks. All best wishes to all of you as we move into Advent and the Christmas season anno Domini (“in the Year of the Lord”) 2021. —RM